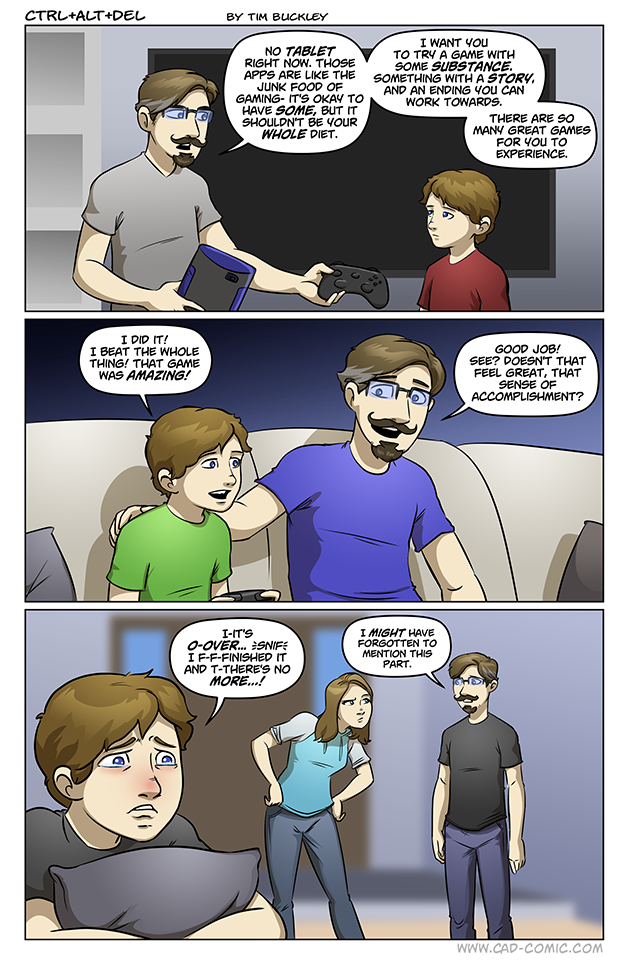 I’m sure we’re all familiar with the bittersweet heartache that comes with finishing a game we really enjoyed. Glad for the journey, but sad that the road has come to an end. My eight-year-old is really struggling with it right now.

My boys play games like tablet games like Subway Surf, and Roblox on their tablets; they’re not my favorite, but its what their friends play, so c’est la vie. However I do try to encourage them to broaden their horizons and play more substantial, meatier games. I tend to offer then extra screentime if they’re using it to play a game with some story value, or robust mechanics.

Recently in an attempt to introduce him to some new games, I set my oldest up with Unravel, since it was on GamePass. He took to it pretty quickly, and then he and his younger brother spent a week or so trading sections back and forth and ultimately finishing the game. So I downloaded Unravel 2, which they could play together in co-op, and they spent another week or so completing that one. They figured out all of the platforming and puzzles on their own, and I’m proud of them for finishing it. But the eight-year-old is not taking it well.

The game and its character (Yarnie) seem to have really connected with him, and for the last couple of weeks he’s had bouts of intense sadness thinking about how the game is over and there is no Unravel 3 for him to play. He uses our phones to search for handcrafted Yarnies on Etsy (we’re going to make one for him), he plays the game soundtrack on Alexa… replaying the game helps to a minor degree, but as we all know, you can never quite recapture the magic of that first playthrough.

In the grand scheme of things, my wife and I know that there are countless amazing games for him to discover, and fall in love with in the same way, and that he’ll find this experience again and again as he plays more games. But for his eight-year-old brain, apparently this game just made an impression, and its hard for it to be over.

This has happened once before, when he was about five. Lego Star Wars 3 was on GamePass, and he and his brother put dozens of hours into it. I remember one point he game into my office on the verge of tears, and when I finally got him to tell me what was wrong, he explained that they only had one more level to bear, and then it would be over. And he didn’t want to play that level because it would mean he had no more.

It’s hard for us to see him this sad, yet at the same time, as someone who has more games than he has free time (and if I even finish one, I’m rushing onto the next thing I want to play), it’s a reminder how much of an impact games can have on us.

Join the conversation. Click here to read and write comments.