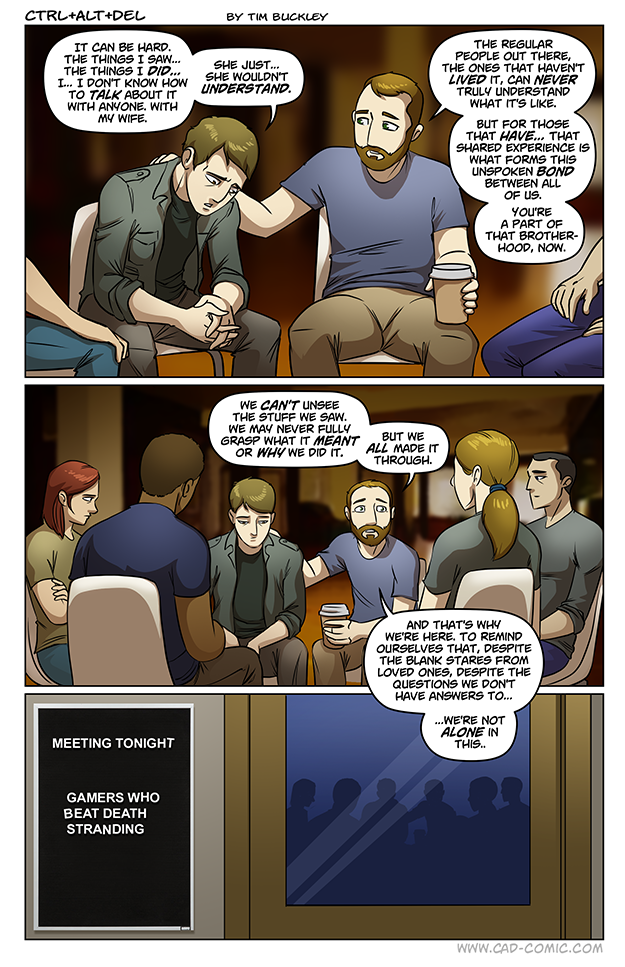 I have finished Death Stranding.

I complete few enough games that I consider this an accomplishment worth announcing in general, but I feel that anyone that finishes this game in particular deserves to shout it from the goddamned rooftops.

I tried Death Stranding the fall it hit the Playstation, and also gave it a shot last year on PC, but I fell off at around the third chapter each time (distracted by other games). It intrigued me enough that I refused to uninstall, adamant that I would eventually get to it, which I finally did most recently with the Director’s Cut.

I’m not looking to review the game right now (better men than me have tried) but I do feel the need to at least acknowledge that I did enjoy it. Whatever else you can say about it, Hideo Kojima made a game utterly unlike anything else, and it is an entirely memorable experience for better or worse. I do think it’s fucking ridiculous, pretentious, nonsensical, both entirely too methaphorical and too literal for its own good… you can’t name your main character “Sam Bridges,” working for a company called Bridges while he builds literal bridges to “bring the country back together,” and name your antagonist “Cliff” just so you can have him say a line like “I was just like any other cliff: a dead end. No way forward. I needed you, my bridge to the future blahblahblah” without eliciting an eyeroll so hard you can see the back of your skull.

But…! Despite that, I am still glad I played it, and saw it all through to the end, for reasons I find impossible to articulate. None of my friends have played it, and attempting to explain to them what I just went through is futile. It all sounds ridiculous spoken aloud, and the moment the words leave my mouth I find myself questioning why I spent seventy hours doing these things. But I did, and apparently had a good time to boot.

I “beat” this game at 7pm on a Friday night, and it was 10pm (!) by the time I had finished the hours of cutscene exposition explaining the fucking plot (because they couldn’t manage it during the actual game), two entire rolls of the game’s credits (I guess in case we nodded off the first time?) and a healthy dose of the game’s signature “run around carrying a thing” mechanic tacked on because of course.

I can hear some of you saying “well that’s fucking mental”, and it is. But I also know that simply telling you that does nothing to convey the existential anxiety of actually sitting through it, wondering why the game refuses to end, constantly reaching what looks like a logical stopping point… only to persist and push on either further. It was a “is this really happening? Am I going crazy?” moment that even now I feel the need to confirm with someone else who’s actually been through it.

And that’s trying to talk about any of the game, really. I know when it first launched, a great deal of the coverage boiled down to “walking simulator” or UPS simulator” and we all laughed about it. I get it, though, because I can’t figure out any other way to talk about Death Stranding. There is more to it… it’s just unquantifiable. On paper, it all looks so silly.

And yet I spent several weeks hearing about “beaches” and “strands” and “EEs” and “chiral” everything while carting various sized boxes back and forth over mountains and valleys and building more efficient ways to get back and forth and absolutely enjoying it in a weird, meditative zen sort of way. I know I had fun. But if I think back objectively I still ask “what the fuck even was that?”

So yeah. I beat Death Stranding. I enjoyed it. You couldn’t pay me to do it again. Those feelings coexist. I will remember it for the rest of my life. Is that a good thing, or a bad thing? Yes.

Join the conversation. Click here to read and write comments.