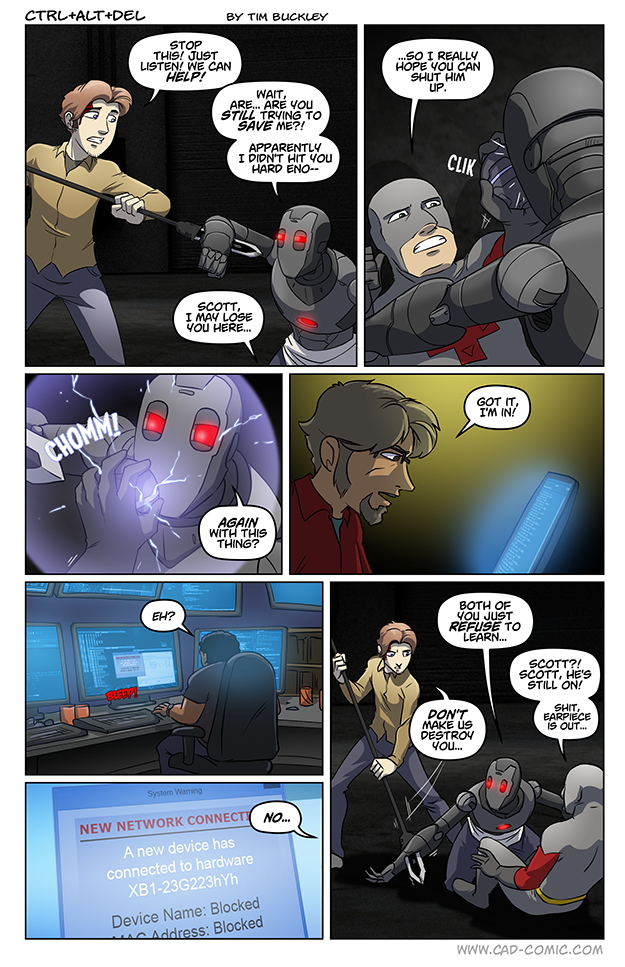 Nice touch with the XB1-xxxx name

Well XB1- which stands for Xbox (first one) makes a reference to Zeke
Which was a nice touch in my opinion , even tho I might be wrong.
https://cad.fandom.com/wiki/Zeke_(_Deceased_)

Holy crap, imagine if that worked.

Perhaps “The Master” should have ordered that ExpressVPN subscription after all.

Ok, that tickled me, probably more than it should have. Here, take my upvote.

Scott should have, He’s the one getting hacked.

Not true. The one in the chair saying “Eh? No…” Is not Scott.

Not to say a counter-hack next strip is impossible, but as it stands Scott is the one doing the hacking.

Yeah. Scott is wearing a red shirt, that’s the Weebmaster being hacked

That robot is really poorly programmed, it can’t use logic, or even simple common sense! I almost feel bad for it.

Now, I’m not saying this is how Tim wrote the backstory, but I’ve always liked the sci-fi idea of creating truly sentient AI not through programming, but by mapping and copying human brainwaves (which is probably not accurate science, but it sounds like it could be), which would allow for creating AI with human emotional and cognitive flaws. And, having seen how crappy the Weebmaster’s reasoning is, that would account for a lot of the robot’s crappy reasoning if he’s just a copy of flawed thought processes.

You should really read the story about the Tai AI chatbot from 2016. It went full nazi in 24h after being fed on Twitter feeds. 😉 In that light this robot is behaving well. 😛

I think it has logic, but it’s inputs have been highly limited. It knows The Master and it knows what The Master has told them. No other data to learn from. As a result, it’s formed certsin opinions.

Also, I think it would resent being “freed” by others. It wants to create its own freedom and not owe anyone anything.

Uh oh, I see exactly why the Master is worried:
MAC Address: Blocked

Most likely he’s only got Windows, so there is nothing he can do to stop Scott 😛

This is more of a “just in case” thing, but the MAC address it is referring to here is an acronym for “Media Access Control” number, not that it is an Apple device.

It’s in the driver settings.

Every single machine that can connect to network has mac address, its basic network identifier for any machine

Yeah, an IP address is like your street address. A MAC address is your first and last name. You can change the first one fairly easily, the second one is considerably harder to and rarely occurs.

I definitely thought the *krack* to Lucas’s head last page was showing that he had been knocked out cold haha. I feel better knowing he’s still conscious.

Leverage, as a the spear appears to be longer than his arm, it takes less force to hold the arm than it does to move against the spear.

Also imagine having a spear rammed through it isn’t doing any favors for XB’s arms functioning.

Guest
no thanks nintendo

“Give me a lever long enough and a fulcrum on which to place it, and I shall move the world. ”

But XB has super robot strengthh, so Ethaam needs leverage AND his own strength

My physics class were a long time ago, but it appears Ethan actually has not that much leverage.

Instead of increasing his strength, the current setup is like a bicycle, you have to work more, but it increases the speed of the tip. Zeke is the one having to work less. By putting his hand in the middle of the shaft, Ethan evens things out, but it’s more like a draw between him and the robot.

It doesn’t matter that much however because it can be easily explained by the fact he has a spear going through his arm, rendering it inert.

I have a sinking feeling that even though this is the *right* thing to do, and a *good* thing to do, it’s going to bite them in the butt. The enemy of the enemy isn’t necessarily their friend, and empathy, compassion, and gratitude just don’t seem to be in his wheelhouse. I could see them doing more harm than good in the long run, and potentially get some notoriety.

What if Scott is trying to gain control of him, not just free him?

Then the three become his new captors, or slaves. He’s expressed will, emotions, the desire to survive… he may or may not be sapient, but he is sentient. Treating him like a ‘tool’ to be controlled isn’t a good thing.

Sometimes, there’s no right answer, and sometimes taking a leap of faith results in falling flat.

Man I need to stop reading these daily…. The wait is killing me. Loving this series so far though! Keep up the good work Tim.

Does Zeke just look tired in the last panel to anyone else?

Wait, wasn’t Scott on his laptop in the car? Or did he drive back home after the going Ethan’s signal and Lucas jumped out?

Or did he go Matrix style and plug himself into the laptop and get a virtual workspace… In which case the hack is even scarier.

Scott is the one doing the hacking. the one that got the “warning” screen is the weeb.

Thanks, I don’t know how I messed that up.

Earpiece is out from inside this tight super hero outfit that has no ear openings! I hate it when that happens. Unless he’s saying the EMP fried it.

Pretty sure the EMP fried it. I guess they have a pretty small AoE, or the first one should have, too.

Scott mentioned in the prep-strip that the EMPs he was sending them with were fairly low power, and therefor they’d have to get close to make it work.

When people say “the phone/cable/net/power’s gone out” they don’t mean it’s *literally* gotten up and left. ;D

While that’s true (as far as I know, anyway), we’re talking about “Holywood hacking” here, I wouldn’t expect it to comply with how real life hacking works, that one’s looking rather boring and dull for an outside viewer. Or so I heard. From a friend.

Uh-oh. Attaching a new piece of hardware (an external hard drive) was what caused my XBOX 360 to Red Ring just a few weeks ago…

Lucas, important tip: Don’t use your friend’s real name when in costume!

Darth Vader wants his quote back, although super meta to have Ethan play the “I am your father card” to zeke