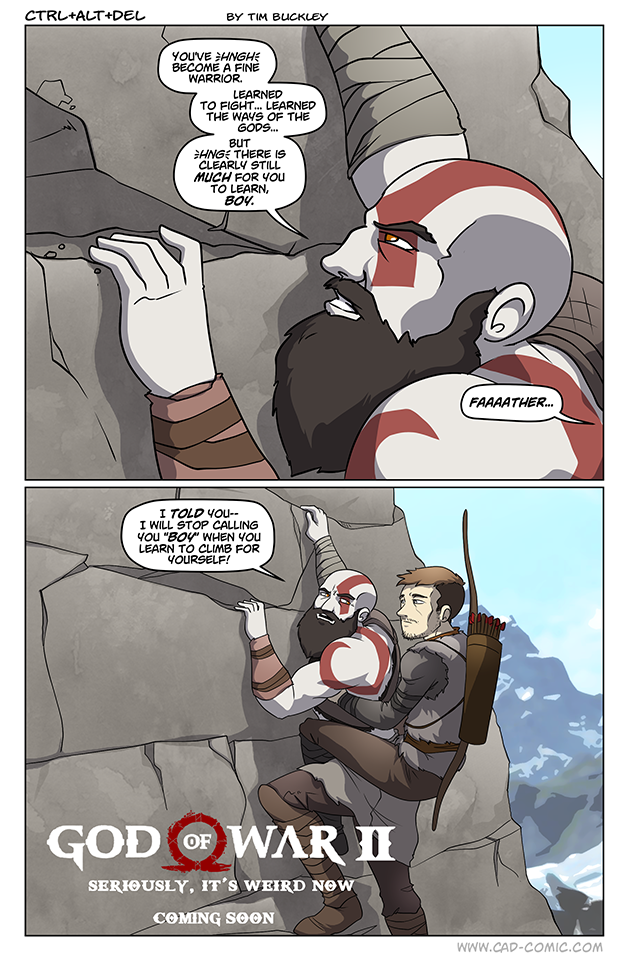 When asked how far ahead he’s planned the franchise, God of War’s director responded “five games.”

He later clarified that doesn’t actually mean they’ll make five more, but I’d probably play them if they did. The newest God of War has been  a truly memorable game, and while it’s satisfyingly self-contained, it does obviously leave the door open for more (and me wanting to see more).

The heart of the game is obviously the relationship between Kratos and his son Atreus. And while it works incredibly well from a story-telling perspective, they also did a fantastic job adding Atreus tot he game from a mechanics perspective.

One wrong turn and God of War easily could have ended up a giant obnoxious escort quest. However some very smart decisions have led Atreus to feel like an individual character, but also at the same time, a direct extension of Kratos’ ability toolbox. Working Atreus’ attacks into combat alongside Kratos’ feels natural and responsive, but even left alone Atreus finds ways to contribute.

Not once has he stood stupidly blocking a doorway, gotten stuck on geometry, or in any way hindered the gameplay. It’s a fantastic example of a video-game companion done right.

However its also a dynamic that may need to change if they continue to make games in this series, and I hope that can keep it just as fluid and natural without getting weird about it.

i cant wait to play

Hi Tim! Thanks for the great comic. Could you make your text a little bigger?

no offense but i think its big enough

ctrl+= will increase it for you.

Learned today that Naughty Dog helped with the AI for Atreus. Makes a lotta sense, considering how greatly the companions work on both Uncharted and The Last of Us.

I just realized how much I dig collaborations of awesome people to achieve even more awesome goals….I think I need a PS4, after all…..

One time and one time only did Atreus get me stuck on a corner and forced me to reload, but that was for or so patches ago. I just completed the story tonight and it was a great ride.

We still have to learn about Atreus’s Mother. (Maybe even play As her)

The storyline’s that were left unresolved.

The other world’s left unvisited.

You are kind of forgetting everything else 🙂

I mentally cracked the nut on why Atreus works so well when I realized that he actually works less like an NPC escort and more like a squad member in something like Ghost Recon. You give him commands in combat and he follows you, and with rare exception he’s never really in any danger, so you can easily add him into your repertoire, like using arrows to soften up opponents as you rush in with the axe.