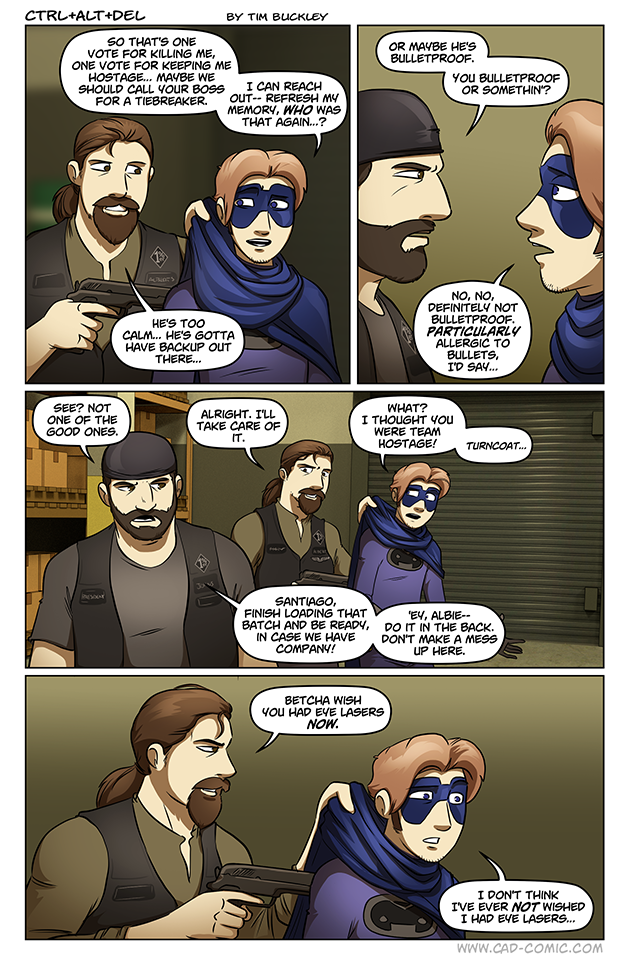 Ethan is clearly not concerned about team murder, yet they’re just assuming he can be taken out back and shot. Like, he’s clearly either lying about the eye lasers, or whatever power he *does* have is useful in this situation.

They seem to be an odd mix of intelligent and stupid.

Ignoring how calm Ethan is…. Deciding it’s a good idea to split up and leave just one member alone with a supe with an unknown power…

I think neither; they’re just practical. They don’t recognize him as a super, so he’s likely either a minor power or an idiot in a cape with no powers whatsoever. If they hold him, his backup could get him, or he could contact someone else, or he’d have more opportunities to retaliate. Yeah, he doesn’t sound concerned about death, and sure, that’s concerning. But in this town? Chances are, that’s a bluff. And if it’s not… well, it’s not like calling that bluff puts them in a worse position than before. Either way, there’s a maybe-super with unknown abilities, so… Read more »

You must be new. >_< I'll not spoil you then (though you could always just read back a ways)

BaufenBeast is aware. He’s talking about the goons.

That, or they’re just thinking from the perspective of the MC members – ie. that they should realise his power is likely relevant. (Or he’s suicidal?)

Albie is going to have a hell of night…

Yep. I wonder if Zeke will be outside. He could just be planning to rob these guys. I dont see robotics parts or 3D printers in their warehouse tho so it would be a stretch.

My guess, spoiler, Zeke is the boss.

My guess is, actually… we won’t see Zeke for a little while.

I think it’s more likely that Ethan will get into more trouble than he realizes here, needs help, and either Scott, Lucas, or (more likely) both come to his aid.

Someone’s about to go… K-KOOM!

How do they not know him as “the hero who threw The Troll off a building?” I mean, that still would mean they don’t know his power, but it’d at least mean he should be recognizable by now.

Maybe “hero throw a wannabe villain” od not their concern, sure they are more worried about the “hero hit the s€#t out of drug ganger” news and things like that.
In a supervillain world, be just a gang sometimes makes you going the radar of big supers.

There is enough superhero activity in this world that when an 80 foot Cthulhu starts ripping up downtown, people are worried about the effect on traffic.

This is the same city that Captain Prime routinely has to save from Dr Eldritch’s tentacle bombs. It’s probably safe to say there’s plenty of superhero news to lose a few video game themed guys in the mix.

Just waiting for Albie to be an undercover cop or vigilante

Ooooooh. THAT would be a cool twist.

I hate to say that, but having laser eyes would do you no good, as long as you have a gun pointed at your back.

I mean up until this point he has had several chances to look at the guy before now. With laser eyes all it takes is a glance…

Ethan still has the better power in this situation. Frankly he’s one of the most powerful superheroes we’ve seen, just not in the way that gets much press. If it wasn’t for the fact that we are in a world with thousands of parahumans, and if he wasn’t such a dufus, he’d be huge. Frankly its a good thing he didn’t go super-villian. Could you imagine the cult he could gather if he grew a goatee and wore a sack-cloth robe.

The Legacy
Reply to  ocramot

“Hey! Can you take me to that mirror over there? So I can look at myself one last time?”

Valgus
Reply to  The Legacy

Just noticed the 1%-er patches on the vest, nice touch.

The Legacy
Reply to  RickyBobby

Tim commented on someone’s reply about that on monday. It is! Apparently it’s a reference to biker gangs, was predates the usage by the general public in regard to its resistance against the richest.

RickyBobby
Reply to  The Legacy

Yep! We had a few Hell’s Angels near my hometown. Anyone with that little patch was firmly under the “do not piss off” category.

it would be an interesting thing if his deaths released the energy of the mass of his parts as a kaboom every time he died and drained the energy needed from where he respawned. every death is a double catastrophe!

If I’ve done my math correctly, that would be roughly equivalent to a 1.5 *Gigaton* nuclear explosion. Or roughly 30 times the yield of the largest (man made) nuclear explosion ever. Every death would be a big enough explosion that he would almost certainly die after he respawned from his own explosion. He would be caught in an infinite nuclear fire, destroying the world many, many times over.

Fun fact I learned doing this: a pound of weight is roughly equal to a 10 megaton explosion.

Bwahahahaha…
*cough cough* ahem, sorry.
Muahahahaha!!! Someone is in for a rude surprise and it’s not Ethan. So looking forward to Fridays comic.

I appreciate that the criminals clearly have their names displayed on their vests. It really makes identifying them to the police much easier.

I may be allergic to bullets, but they also have no permanent effect either…

Why is Deacon St. John being a bad guy? 🙁

I’m slightly worried based on the title of this arc that Ethan doesn’t realize he’s on his last life. Everything which has already taken a downward spiral takes even more of one because:
Ethan is permanently gone
Lucas and Scott think Zeke did it
Zeke thinks they’re responsible
On the other hand – I can’t see Tim perma-killing Ethan.

I don’t believe that would ever happen, from a narrative perspective. We’re taught, as an audience, that Ethan has unlimited lives. Everything points to that. To make him be on his “last” life, without warning, is a huge cheat to the reader. It not only ends all character development and growth abruptly, but it breaks the rules of the created universe. And it’s made worse by the fact that true death is permanent. There is no recourse, no way to bring him back, without breaking the rules of the universe a second time. Storytelling is a game of setups and… Read more »

Agreed. I expect that if we ever do find out his lives are limited, its going be followed by finding out he can earn 1-up’s.

Imo the only way that happens is if Tim wants to reboot the story; Ethan is a caricature of Tim so he’d sort of be permanently killing himself in a way. But in one of the very first issues of Analog and D-Pad, Ethan swings through a window and stabs himself in the neck and dies. When he respawns, he says something to the order of “Infinite Continues!” It’s been established thus far that he has infinite lives, so as Eldest Gruff said, the only way it gets to where he’s running out is if there’s a lot of foreshadowing… Read more »

I’m hearing the Benny Hill song in my head as he’s shot over and over.

I am aware. Just know that, if people know it, they mainly know it for Benny Hill.

This came out early. Go Tim!

The title is going to have a more gruesome meaning if Ethan regens inside Albie by accident and explodes him.

How many Ethan corpses are out there in the world at this point?

I believe – I could be misremembering – the corpse despawns when he respawns.

Yep, there was even an experiment on how long he needed to have “donated” blood stored before it was safe from respawn.

I’m not PISSED. But it does rise a tiny flag in my head, when they seem to go for the “latinos are criminals” stereotype (Santiago).

I can tell Tim is not an a-hole, so I’ll give him the benefit of the doubt.

He was probably just trying to be inclusive. It’s really the kind of thing you need to live through, to grasp. Are you latino? Because if you aren’t, you telling how a latino (me) should feel about how latinos are misrepresented often enough… Is pretty white privilege of you.

I’m sorry for your (presumably) terrible life experiences, but I do hope even you can realize how odd you’re looking right now. It’s just one panel, of a mostly irrelevant background character (who isn’t even in said panel), in a (part)-comedy webcomic, that just happens to be a criminal. Don’t you think you’re overreacting a little bit if you think that somehow equates to calling/considering all members of a certain race criminals? Especially considering the presence of every other character that somehow doesn’t get taken as a stereotype? I agree that racism is terrible, but please don’t fall into the… Read more »

The fact he’s so calm about being murdered really should be ringing warning bells for these idiots. Oh well.

I am loving this conversation.