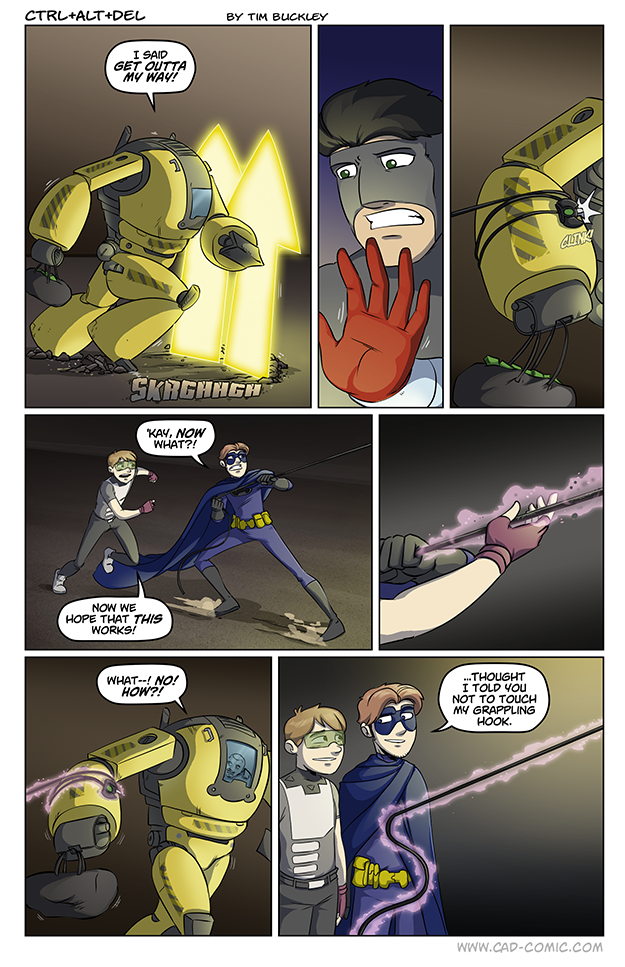 He has the same powers as TiVo!? *Keaunu Whoa intensifies*

So when he pauses something, does it also trigger an “immortal” flag on whatever was paused? I mean, it’s probably safe to assume the grappling hook can hold a lot of weight, but couldn’t Duke just cut it still, unless being paused makes it “immortal”?

Pretty sure it turns it into an immovable object, so cutting it’s not in the cards. Hell, even if he could, the cut off pieces would still be immovable and in his way.

He could however just sever the arm, then he’d be free to move again, unless Ethan throws another grapple line to his other arm and both legs for good measure.Join the discussion…

True, but note it’s the arm with the goods. Swapping the bag to the other arm will take precious time Duke doesn’t have and would likely get grappled some more, like you say. Alternatively, he could just get rid of the arm and try to escape, plans foiled.

No need for an immortality flag. Damage and destruction themselves are features requiring special implementation/subsystems. If an object is paused, it will be skipped for all operations. In addition to movement/physics, that includes damage, deformation, event triggers, object splitting, etc. If you think about it, the “paused” object is the easy part. It’s everything around it (or the interactions between it and other objects) that will require special or more robust handling. That, and the special exception for “unpausing” the object. (The only way I see to make sense of these game-based powers is to interpret the real world as… Read more »

Alright, now break open that suit of his and yank him outta there!

So why wasn’t Ethan frozen?

I think it’s because Gameboy touched the controller and not Ethan’s arm. There’s no transitive property action, so whatever Gameboy directly touches is what gets frozen.

Ok, that’s a good point. What are the limits of the power? It can only pause the whole object/living thing the boy touches? So he would have a hard time pausing machines made of lots of different parts, like the robot, right?

Not really, since the grappling hook is also made of different parts. It also affected Ethan’s clothes along with him last time, judging by the aura. The thief’s bag, too. I think it works more along the lines of a conceptual level of what constitutes the thing that’s being touched, maybe?

I agree, I did look back and take a look. That did result in a few considerations and questions. From the looks of it, the people that are paused, can’t move eyes, talk or do anything. So is it like a time capsule? Is Gameboy the only one capable of permanently stopping Ethan? All Ethan has to do is die to escape any confinement. But with Gameboy’s powers, seems like Ethan can’t die (puts to question that anabolic/metabolic state of living tissues..). Also the question arises whether the person is conscious during it or not. i mean we can infer… Read more »

Well now, this is interesting…..
The operator can still move, but the suit is paused…
Limit to Gameboy’s power?

As I see it, the operator is not paused, the arm isn’t either, but the wire entangled around the arm is.
It’s a gigantic shackle with a “Thou shalt not move” commandment applied to it. That arm isn’t going anywhere thanks to that.

Say Tim, I was wondering if you had any familiarity with the Japanese super hero show Kamen Rider? Particularly Ex-Aid, which is the one with the video game theme.

I feel like I’ve heard of Kamen Raider, in my travels around the toy collecting/customizing community… but I couldn’t pick it out of a lineup.

Effectively, it’s a Pwer Rangers spin-off, but he goes at it mostly solo. And, tends to have a motorcycle.

It’s a crazy but awesome franchise. Bring up Ex-Aid as a some of the powers and aesthetics remind me a fair bit of Analog and D-Pad.

Oh hey, I remember this from Worm, where Clockblocker has that arm attachment from Kid Win to trap people.

Tinkers are such a pain!

Was coming down to say, “oh neat, he pulled a Skitter!”

Yep. That was frankly one of the best moves that could be done with the power and its a wonder nobody had thought of it before then. he already pulled the freeze random objects into a barricade trick all the time. Why nobody thought to give him an Indiana jones whip that he could freeze when it wraped around a suitable target is beyond me.

ok whip would be bad idea with the jokes he would make about it but still the high tech tinker glove with deployable rope dispenser is logical.

Hell, if the kid got just a stack of paper he could climb any building. Just has to place in mid air pause it and make a staircase anywhere he wanted. or even wearing a cape himself, just pause it and boom instant barricade.

I was just about to ask if Tim had read Worm. Hey Tim, if you haven’t read Worm, please enjoy: parahumans.wordpress.com

Never even heard of it before all these “Cockblocker” comments.

It’s really good, it starts off with street level stuff and as it progresses, it gains a kind of a horror vibe which is really well done. It’s long as hell but really well worth the read.

This boy is smart! He should totally get some lassos himself or a gadget that lets him shots nets attached with a string to his gadget so he can touch it and capture villains. Such a useful ability!

Well he did say this was an experiment, so maybe after this.

I bet we see some epilogue page after this chapter where Gameboy tells his (probably hot) mom his awesome power display using a rope to stop a 3 meter huge Power suit.^^

plot twist: the mom is lilah

plot twist, ‘mom’ is the girlfriend… OR… reporter?

Nah, I doubt Lila would be Gameboy’s mom. She, Ethan, and Lucas are all too young to be his parents I think since they look to be in their twenties. Now I do think Lilah could be Gameboy’s aunt or an older cousin that visits him every now and then.

Erik B
Reply to  Kaelin

Also likely not girlfriend, because she reeeeeaaally doesn’t like supers. Whereas Gameboy’s mom is all for him doing community service, within a safe and reasonable limit.

Better. Clockblocker worked years before Skitter showed him tricks like this.

ya very few of the capes in worm could innovate to save their life. Their power does X and X is all they do with it even with obvious side applications.

I dunno about “unstoppable force”, but we certainly have an “immovable object” right here.

So.. we’ll put up a wall. We’ll pause it. Then put Thor’s hammer on one side and Thor on the other. Will the hammer go through?

Thor’s hammer is an unstoppable force? Tell that to Hella.

So, he has to deal with any momentum the object currently has, but after that it’s an immovable object (relative to Earth or any other giant gravity well, I’d imagine)

I can see a future costume for him having some shock absorbers or something to safely transfer the energy of that momentum somewhere else like the ground or something.

Aaaw, did they just get a sidekick?

Based on these rules, two thumbless gloves plus any kind of grippable objects and he can swing/climb anywhere he pleases.

The level of Nope involved: https://grrlpowercomic.com/archives/comic/grrl-power-66-hero-baiting/

Huh. I wonder what the higher end limit to Game Boy’s powers are? Like, could they plunk him down on an ELE sized meteor and have him pause it while they figure out a way to divert it? Or stop the earth’s spin and orbit around the sun? Geeze, what about when this kid becomes an omega level mutant, will be be able to stop things remotely just by thinking about it? Or stop individual parts of a person, like, just their heart? Scary array of possibilities there. Hope he doesn’t go evil! XD

What are the odds that Ethan tries to abuse Gameboy’s power by getting him to pause the doors to MegaGame?