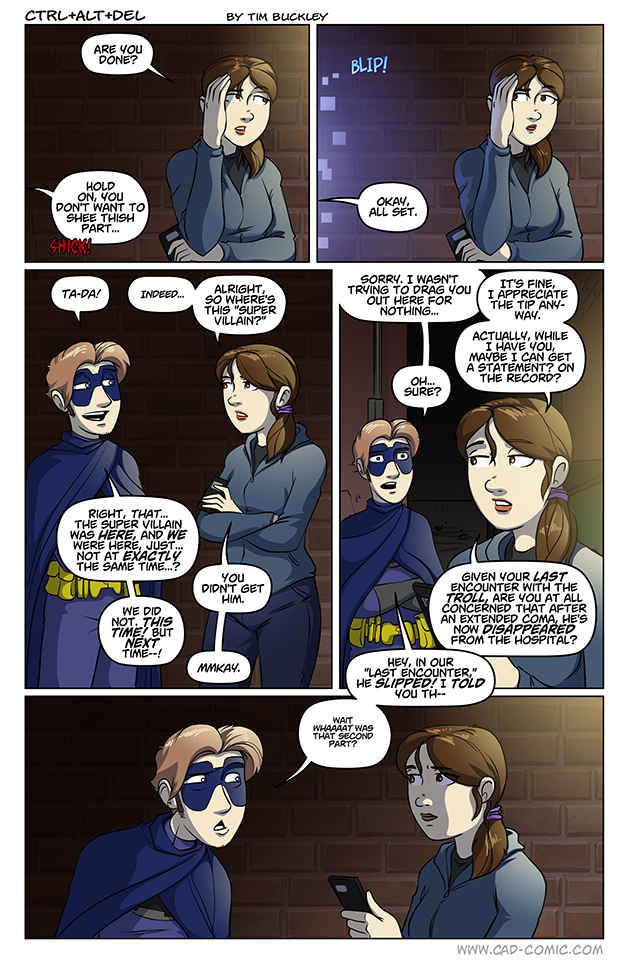 Oh man now there’s that to deal with. What a pain of a day😒

What an absolutely shocking turn of events. How could anyone forsee that after barely surviving an accident with unspecified toxic waste, he would disappear. I sure hope he doesn’t reappear with superpowers of any sort, that would be wholly unforseen. Why, you would expect that after such an accident he would simply spend the rest of his life recovering quietly and nothing else.

Kind of reminds me of a certain villain who fell into a vat of toxic chemicals, only to reappear shortly after with paste white skin and green hair, though no superpowers to speak of.
Quite the jokester that guy.

The Return of the Troll! Considering how he was practically wrapped in as a mummy before… also he fell into chemicals… Wonder, if he returns, how he’d look like… Looking back at the comic from when the Troll fell, the truck has… “Ashford Chemical”? Haven’t heard that name before, but there’s a line through Ashford (or Askford) and making it hard to read. ^^; Still, if this is true, nice to see Analog and D-Pad getting some recurring villains. xD

It would be very apt if he became a Deadpool-style regenerator. Both as a foil to Ethan and because of the name.

Analog’s first speech bubble should have read: “Hold on, you don’t want to SHee thiSH part.”

Hmm, as interesting as a league of villains could be, I don’t see the troll being a team player.

For all you know, The Troll’s real name is Leeroy Jenkins, and he’s the teamiest player who ever teamed a team.

Geez that seems like too minor an injury to Reset over

Remember Ethan was killing himself to figure out how long his blood would last so he could sell it. Here he had a broken nose and busted out teeth. This is a normal everyday thing for him at this point. I imagine he dies 2-3 times a day getting out the shower and shaving in the morning alone.

The loss of two adult teeth, plus thousands of dollars and months of dental procedure to replace them is not exactly a minor injury 😉

The man once purposefully injured himself to get out of paying for a used GameCube game and suffering the shame of having a membership card to a rival business, then Resetted himself to heal from those self-inflicted injuries. This is FAR more reasonable.

The initial injury was accidentally slipping on ice (at least that’s the way he tells it) but staying injured long enough to get what he wanted was on purpose.

You clearly never had to endure the agony to your body AND your wallet that major dentistry involves.

*Disappeared* Disappeared or “Someone checked him out, and that person doesn’t exist now that we look at our records” Disappeared?

Probably a “conspicuous giant chemical burn where the wall used to be” disappeared.

Or maybe “why is there a dead guard chained to his bed wearing a clowns mask” disappeared.

I have to wonder how we are keeping up the charade of hidden identities when heroes where masks that only cover up parts of their faces. I went to a local deli after a 7 month absence and over half my face was covered. They recognized me immediately. Analog and D-pad would never have kept their identities secret.

There’s two differences there. First, people tend to recognize each other primarily through the eyes; that’s where most expression happens. I could identify a hundred celebrities by looking at them from the nose-up, but zero celebrities from looking at the nose-down. People are much more recognizable with a ninja-style mask, than a domino mask. Second is, those people don’t know you as “DeusFever, Masked Vigilante of the Night,” they know you as Waldo, or Bruce, or That Guy Who Always Gets Five Pounds of Olive Loaf. You’re saying that Lilah should recognize Ethan unmasked while she only knows him as… Read more »

no thanks nintendo
Reply to  Eldest Gruff

I can’t see Emily saying that. I can see her telling Ethan off for continuing to insult her with his super hero “lie”

I recognize people by the style of shirt they wear.

Maybe you should try wearing no glasses and skin-tight lycra with a red cape to hide your identity.

This is why superheroes always wear tights. The mask doesn’t really help protect their identity that much, but spandex? People are either looking somewhere other than the face or exerting so much mental effort not to that it clouds their memory.

“Toxic Troll” is a better villain-name for him, to keep with the jargon.

Or maybe named after something from Fallout……

no thanks nintendo
Reply to  Leon

GUNnibal
Reply to  no thanks nintendo

Now, strictly speaking, I don’t want to condone the idea of beating a dead horse… But this got a chuckle out of me, so here, have an upvote =)

I was thinking the ‘Super Mutant’?

Had an ad for adobe acrobat come on twice with audio forced on despite the mute button showing, again in the “esport weekly recap” video you have embedded.

“Are you at all concerned that after an extended coma, he’s now disappeared from the hospital?”
Ding ding ding we have our Joker!

Just wanted to say thanks for not turning CAD into a political screed – it’s been great to have *something* that isn’t these last two months.

Perfect, prop up Eugene as best buds with Ethan and point the troll at him as a way of supposed revenge. Enemy of the state problem solving ^^

Hey Tim.
I am wondering, how many re spawns does Ethan actually have?
Is it infinite or do they have to be charged up day by day or by doing feats or collecting things (like in the old games).

From what we’ve seen so far there’s no additional ‘recharge’ condition (it’d have come up by now). The respawns *seem* to be unlimited, but even Ethan has no way of actually knowing how true that is.

Well, that’s the fun part, it *seems* infinite, but Ethan gets the never ending existential dread that maybe one day he’ll hit number 9999 or something and find out that was his last one!