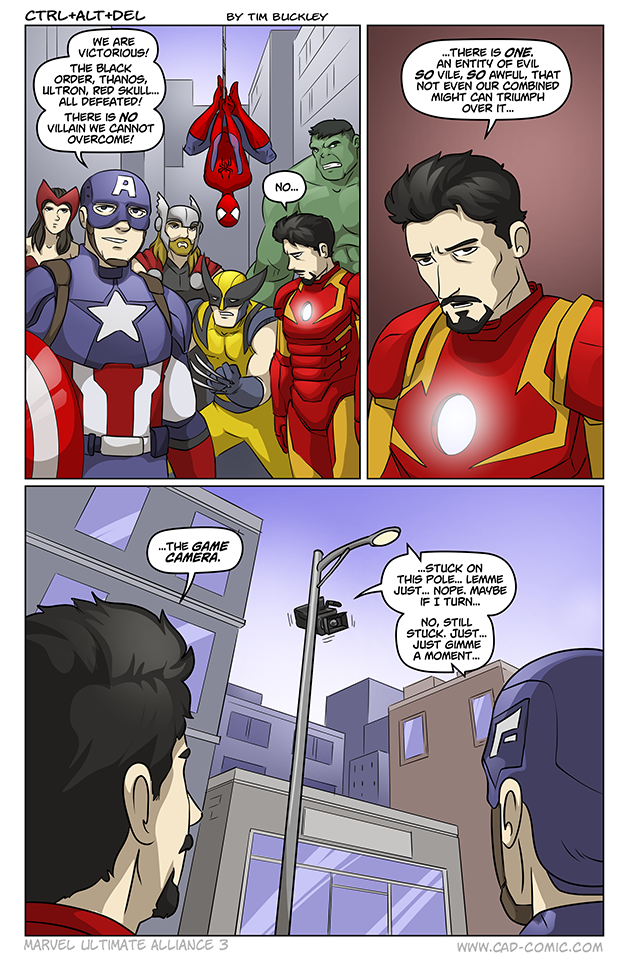 I’m loving Marvel Ultimate Alliance 3. I’ve been playing it with my boys, and even though it’s more challenging than I expected it to be, we’ve been doing alright on the default ‘Mighty” difficulty setting. My three-year-old can navigate and mash buttons, with no concept of power move strategy, but typically I can carry him through the tougher fights and he’s happy just to be playing.

The camera in this game, though. Most of the time, it’s fine. But when it derps, it derps hard. Catching on corners, flipping around in front of our characters super close so we’re looking behind us as we move forward, or zooming way out so nobody can even tell who’s who. It’s not ruining the whole game for me, but it’s definitely noticeable. We’re playing on a TV, I’m not sure how you could even deal with this camera on the tiny Switch screen.

Still, it’s a lot of chaotic fighting and flashy special moves with characters we love, so, it’s a good time overall.

Erik B
Reply to  Crestlinger

I was thinking Steven Merchant, a la Wheatley from Portal2.

nah…Stan Lee would be more appropriate. Plus it would be a cameo.

How’d you get your three year old to even move the sticks around correctly?

There’s only one stick on a Switch Joycon 😉

I admire your ability to put up with such a task. I remember playing the campaign for Halo 2 with my dad when I was a kid and I can only imagine how frustrating that must have been. I remember intentionally jumping off that moving temple repeatedly just to dick around.

there’s probably a lot of bumping into virtual walls involved ^^

Reminds me of a similar issue in WoW regarding terrain. You can fly all over the world and fight godlike monsters 1 on 1, but the tiniest tip of a branch or root can withstand your every mighty attempt to move forward, making you have to take a step back and go around it.

Iron Mans Armor looks like a mashup of Iron Spider.

Evil and incompetence aren’t the same….

I’ve been playing solo in handheld and mostly the camera is not terrible. But the are instances where it is really wonky.
Really annoying when it starts going wild on a bossfight making it hard to see and dodge boss attacks.

Overall I do enjoy the game though. The roster is playing it a little safe with the playable characters though with mostly recently heavily featured ones with few exceptions. That said i still have a few more to unlock.

It’s possible that a lot of the camera issues are caused by trying to focus on multiple people playing on the same screen.

I blame Ultron. It’s his last vengeance and a hint at his eventual return.

Yep, a buddy of mine bought the game and had my two younger brothers and I over to play on release day. Loved everything about it save for the god awful camera. Brought flashbacks of Sonic Adventure 2 and every Devil May Cry 1-4.

And she LOVES it.

I don’t think she quite understands the concept of ‘winning’, though, and that it’s better than watching the character yell over and over as “they fall down!” over and over, so I think I’m going to wait until we’re four for the co-op games.