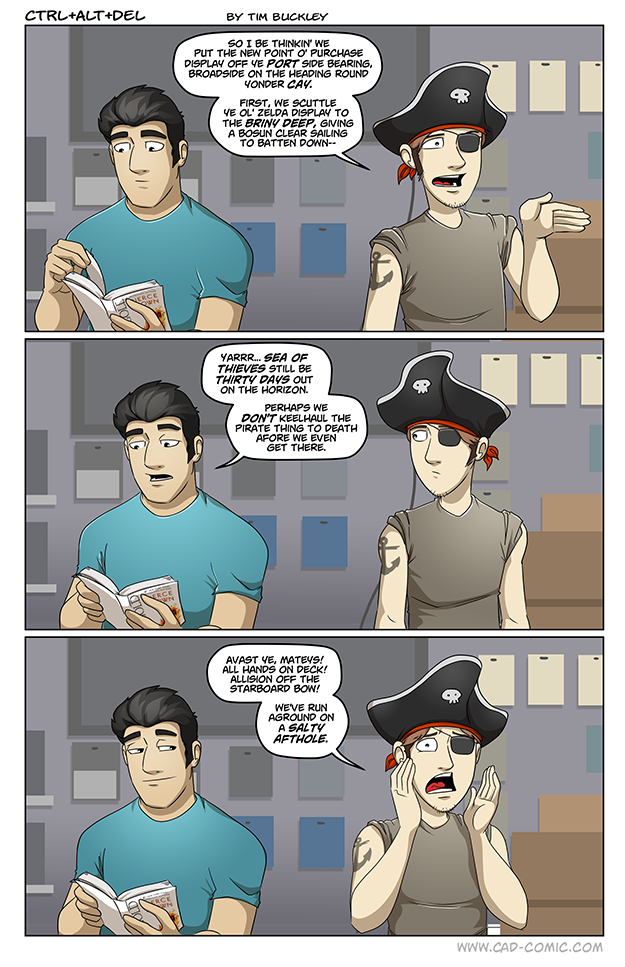 Oh man, thank goodness for Monster Hunter, because without it the Sea of Thieves withdrawals would be too much to bear.

I avoided playing in any of the early beta tests, because the way the game was described had me worried that there wasn’t enough depth, and that if jumped in too early, I’d find no reason to ever go back. I caved, though, and played in the most recent scale test. Just a wee bit, to get a feel for it.

None of my friends were available, so I left my fate to matchmaking for a galleon. I was immediately placed with three guys; one left right away, don’t remember his name, but the other two were a couple of British teens, Max and Peter.

Now I’d never met these guys before, but I’d end up spending the next three hours sailing the high seas with them, digging up treasure, practicing anchor-turning, trying to chase down other ships, and even just making up lyrics to the in-game pirate music we played as we sailed.

With what are, admittedly, a limited set of in-game tools/mechanics, I had so much fun I couldn’t stop talking about it for the rest of the night, regaling my wife with recaps of my pirate shenanigans.

Obviously I hope they continue to add things to do in the game. Things to collect, things to see, things to sail and different ways to destroy those things to sail. But for me, that’s all gravy. The amount of emergent adventure present with nothing more than a boat and the open ocean have more than sold me on the game at launch, and now I’m just dying for another little taste as soon as possible.

Xbox and PC cross-platform play is brilliant as well. Closer to launch I’ll post my username so that you can join me for some buccaneering if you want.

Update: There are lots of clips and streams you can find from Sea of Thieves’ beta tests, but I thought this one was a particularly good example of the sorts of fun adventures that unfold in the game. None of this is scripted or dictated by quests or strict multiplayer rules; this is just what happens when you give people a great set of tools and let them loose.

Already preordered, i really have enjoyed my time sailing so far. hans42

I’m just excited to see Rare coming out with something new, exciting, and fresh after so long. I’m not much of an online gamer, so I’m not going to be playing myself, but I’m sure I’ll be watching some streams of others when it launches.

I hear one of the things that is going to eventually come over is pets for players… I’m crossing my fingers and hoping for some subtle DKC easter eggs. Monkey with a baseball cap, or a parrot who resembles a certain animal companion, maybe…?

They just need to have a chance of islands randomly having a rhinoceros on them and that will do it.
Not any rhinoceros in particular, just one. A large gorilla appearing in the same place also couldn’t hurt ; )

Someone is reading the new Iron Gold book. Just finished. Awesome. And fuck yeah for Sea of Thieves!

I’m so excited for this I even got the Limited Sea of Thieves controller for Xbox. I’ve had some amazing moments playing just whats in the beta and such that I can’t wait to see what all is in the game!

I’ve played through both Beta windows, and the withdrawals are HARSH. Just jumping in and sailing around with enthusiastic rando’s has been the most fun I’ve had since BOTW. The music, the setting, the controls…just incredible. I’ve seen the “depth” argument before, but in the hours and hours I’ve spent in this game, it hits all the right notes for an “experience”. Watching a crew shake out and settle into optimal sailing roles, all so we can flee from an angry galleon who’s treasure we just stole, watching them slowly fall behind as we slip into a fog bank and… Read more »

Exactly. It’s the kind of game where you CAN’T show its depth on paper. Its not like an RPG where you can say it say “Three hundred quests, four continents to explore, 90 levels, blah blah blah”

But once you play it, you can’t deny that they’ve crafted something really special 😀

100% agree. When your game has moments like “Me and my new pirate friends, sitting on the deck playing music, watching the sun rise, with the wind in our hair….only to realize that the helmsman had gone off for a smoke break and OH GOD THERE’S A ROCK DEAD AHEAD”

Sounds great, I wish I had the spare money to get it. Or rather to get a new computer, I am currently using a 2012 laptop or something, it runs well but doesn’t work for heavy duty games. Side question, does anyone know if Sea of Thieves is playable with bots? Because otherwise it will die really hard (may take years to do so, but really REALLY hard when it finally does). The 7-people-to-run-the-Tardis scenario can be a pain. (If you have no one to help you run a ship that requires several people to do so, then it is… Read more »

No, there are no bots. Nor does the game need them to succeed. You can 1-man a small sloop if you don’t want to get together with others on a galleon, and the world is divided into hundreds of identical shards to prevent it from getting too crowded or too sparse. The game will seamlessly move people between instances in order to meet their target saturation goal for the map.

So the issue I brought up exists, but only if you want to do something big. Otherwise you can manage alone if you were to start playing years later. Interesting!
A nice middle ground between the “you must have 5 people to play” and the “Here, no one can hear you spew expletives when you die” that I’ve seen a…”goodly” amount of times.

There are good number of NPC enemies on “Fort Islands”. Mainly skeletons to fight and blow up, who can and will shoot at your ship from towers. But the other people are definitely the driving forces. I definitely agree that on-board bots are not needed. The ships range from 1-4 man, and are designed/sized differently based on this. You choose what you want to do when you first join in, and the ships are pretty well balanced. There’s a definite benefit to having more people of course, but a 1 man sloop CAN outrun the 4 man Galleon, if skillfully… Read more »

That sounds nice.
Incidentally, does anyone have a small loan of a thousand dollars I can have that they will never get back…
*mischievous grin*
I’m kidding I’m kidding

I was playing with a couple friends during the scale test and while we were finishing up a run, they got kicked out and I ended up steering the galleon by myself. A couple randoms jumped on and serenaded me while I got us to the outpost. So much fun!

When attempting to login/register, I recieve the following message;
“The email could not be sent.
Possible reason: your host may have disabled the mail() function.”

You’ve got display problem with the comic – it starts showing below the sidebar instead of next to it. There’s just a black screen until I scroll down.

Also – REALLY hate that I can’t go to a single bookmarked page and automatically get the latest Silly showing like you could on the old site. I have to go to a specifically bookmarked Silly comic, then hit “Latest Silly” link. You need a specific page that autoforwards to latest silly just like the main comic page does.

You mean I’ve got a display problem on whatever hardware/software combination YOU’RE using 😉 And if you told me what that was, perhaps I’d be able to bring it to my people and see what the deal is.

Also, just bookmark the main page. The latest silly/link to the latest is RIGHT there on the sidebar. I don’t update them often enough here for you to need to check them that often XD

This looks so awesome! I have been waiting for a good Pirate game since Sid’s Pirates (the original) when I was a kid to the re-made version that still holds up.

This really looks like it can fill that niche. I am imagining the shenanigans now with a few people. I will be getting looking for this pre-order when I get home.

Thanks for bringing this to my attention. 😀

Clearly there’s no hard feelings for Lucas and Ethan with Microsoft offering Sea of Thieves for free digitally when someone spends $10/month on Game Pass? And thus meaning far less customers going to their store?

Well, they run a physical store in 2018. Miyamoto knows they’ve had to swallow worse situations. Not even counting the Mega-games down the street, that even THEY went to for a mere pre-order.

Gotta make the money on the tournaments and community gatherings. (And Scott’s inventions probably.)

Yeah, it must be tournaments and stuff that they make their best money. Otherwise, they usually seem to have a lot of downtime at the store – reading, playing games, making tearful videos, etc.

Man, even the GameStops I walk into are deserted half the time XD

Yeah, game stores are going to need to change things up for themselves if they want to stay in business. With buying games online and the preference for digital copies becoming more popular, it’s not surprise that they are slowly going out of business.

Maybe change into a computer store that also sells gaming consoles, games, and various other things needed for gaming as well.

Truth be told, I’m surprised Ethan and Lucas are still in business. It’s usually the small business that go first when their business goes obsolete.

Omnitropolis seems to be in a universe that pays attention to and has a greater cultural significance on gaming than ours does. I mean, heck, the people in it actually celebrate Winter-een-mas openly. While it’s clear that Ethan and Lucas do have a slowing business (I can’t find the strip, but there was a short story in which Lucas explained to Ethan that they were doing better sales than he thought), I kind of imagine that they’re probably doing the same sort of sales that game stores did back in 2008-ish. I mean, heck, when we saw the interior of… Read more »

Side question:
Is the church of gaming a thing? Because that would pretty much force stores to have a reasonable amount of buisness whether they want to or not.

My god!
Not an Afthole!
At least it isn’t Dire.

No more No Man’s Sky comparison-jokes?