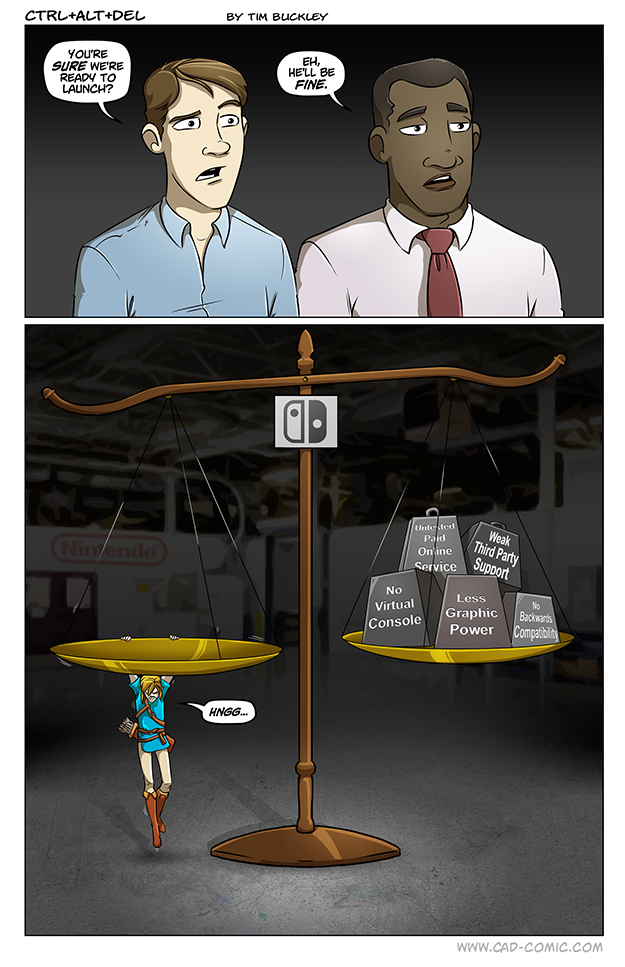 Entirely On His Shoulders

Looks like link could use the extra heavy boots.

Him.
Reply to  Greg

Well, they used those to make the scale so….

The paid online service doesn’t launch until a year and a half after the Switch released, so that’s null.

So it should be
No Virtual Console, weak third party support, and no backwards compatibility
vs.
idk, Arms? 1 2 Switch?

Why the hell would they be comparing the Switch to their own console? The Switch has less graphic power than the other consoles of the same generation (XB1 and PS4).

It doesn’t matter whether the paid online service had launched, the point is Sony and Xbox have had generations to build networks and infrastructure and prove their online services. Nintendo had never done one, thus it is an untested variable.

Also, BotW being on the WiiU is irrelevant. At the time, BotW was THE system seller for the Switch. THE reason to buy one.

Now look at the switch today. Flourishing with alot of 3rd party games.

BOTW was more than worth it on its own. There are plenty of great games for the Switch now, and there even were back then. The only way I’d trade the Switch for any Xbox or PlayStation, including the upcoming ones, would be so that I could sell them to buy a new Switch and more games.

Mario and Zelda sell the system, they always do

They have to. Nintendo doesn’t have much else besides Mario, Zelda, DK, and Samus. And Pokemon. A lot of big-name developers like Capcom and Squaresoft/Square-Enix haven’t invested much (if anything) into Nintendo consoles for years.

Not that Mario and Zelda aren’t worth playing; they are (well, maybe not Pokemon except every 4th game or so 😉 ), and the Switch’s play-on-the-go option is definitely a nice feature. But other franchises are worth playing, too. Some are exclusive (e.g. Final Fantasy is Sony-only, Halo is Microsoft, etc.), but where they cross platforms, in general they just run better on other consoles.