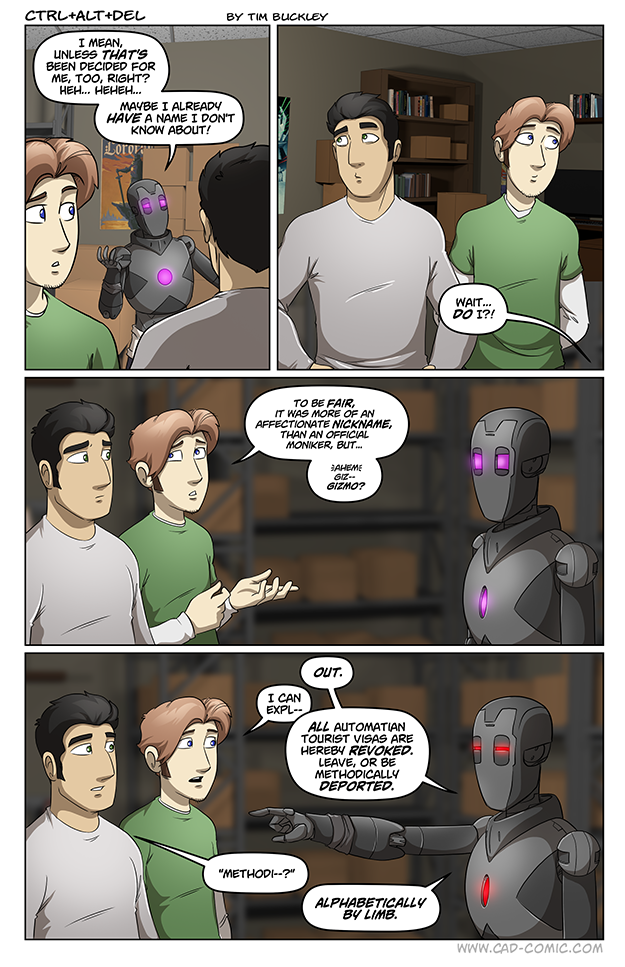 Lol woo talk about overreaction. To be fair, Gizmo was a stupid name.

does Zeke know about gremlins?

It’s also oft used, though old,, slang for “weird mechanical thing with no name that does things I can’t explain”. (Or some such)

So it could easily be taken as disrespectful to Z.

I dunno, I think I’d have about the same reaction if I was the lone human on a Bot planet, and they wanted to name me “Pudgeley Fluffertop,” on account that I have a squishy non-metal exterior and I’ve got hair on my head.

Or ‘fleshy bag of mostly water’? Or ‘part of the carbon problem’? Most names can be taken more than one way. A lot of folks like to call me by the diminuative version of my given name. I prefer the full name (it is what was given me and is an honor to my grandfather) if they are work or other ‘ring 1’ friends (vs. the ‘ring 0’ besties who’ve bled with me and get to call me whatever the **** they want to call me). If it comes to a sales-critter, whose tactics of false presumption of familiarity are… Read more »

But you can call me “Pudge”

I will accept Pudge, on account that he controls the weather.

His name is Punch.

It occurs to me that Gizmo is basically a cute little Muppet they kept as a pet.

That might p*ss off most of us (to be referred to as a cute pet).

Maybe he ought to pick a name from one of the folks who developed the constructs of thought or logic that have led to his creation and evolution? Not the maker, but to the pioneers and visionaries who imagined life beyond just the carbon based variety.

Time to look for a new storage space? XD

It’s ok guys, he is just hitting puberty, it’ll pass. Just give the guy some space for now.
That said, I feel like Gizmo’s overly intemperate approach to things in general is largely due to the fact that as a being he is technically quite young.

Also that last remark makes me wander which part would go first. And last, for that matter.

Are your limbs not just arms and legs?
But maybe it could go something like:

And maybe toss in the head too, but that would be the first to go then xD

Are your limbs not just arms and legs?

I… will neither confirm nor deny that, fellow human.

Jokes aside, though, that depends on your definition of a limb. As usual, there are multiple schools of thought here. E.g. one’s nose can be counted as a limb, as well as… other protruding bits.

According to merriam-websters primary definition – one of the projecting paired appendages (such as wings) of an animal body used especially for movement and grasping but sometimes modified into sensory or sexual organs.
So probably just arms and legs at risk for now, if “Gizmo” had said ‘appendage’ on the other hand, they should be fighting each other at the door to be first out of the room already.

Does that not suggest that if you lost an arm, your other arm could no longer count because it is no longer paired?

And what would they say about the Centauri from B5? They have prehensile male bits that may be prehensile!… but I don’t think they are paired.

Now if that is the full count of limbs, and he said it would be alphabetic by limb, he could mean:

Only the limbs will be deported (plus perhaps any parts that stay attached during the deporting of a limb, which leaves room for an arm pain compliance move to eject the entire offender)

The limbs will be deported first, then the rest in an unspecified order

My vote would be saving the head for last then kick it through the uprights for 3 points.

Head first would give minimum enjoyment for the dismemberer, so, since there’s only one, simply replace “torso” with “the head”

You, sir, have my respect for all eternity

Whelp… The LED situation has resolved itself…

I wonder how many colour coded states he’ll end up with.

At least it is a better way to depict emotional status than the exaggerated oversized eyes you get in some Manga.

I’ll be honest: Red Ring Zeke took that WAY better than I expected.

I know! He warned them, rather than going straight into kill-mode.

So this basically confirms that the LEDs are more in correspondence with his mood, as now he’s mad again. Red = anger confirmed. But is purple happy? Or just…calmer? He seems to be running the full spectrum of emotions, but his LEDs can only keep up when it’s his general state?

Well, blue is commonly considered to be a calming colour, so perhaps purple isn’t outright clam, but at least… somewhat-tempered homicidal rage?

Well, maybe he watched too much Star Wars. The Sith sabers were red, the wise ex-Jedi Grand Master’s saber was purple, and the kinda hapless ones carried green and blue mostly. In that view, red would be tied to anger, frustration, rage, violent thoughts, and the like. Purple would be a balance of the total calm of the blues and greens and the red of the darker emotions, and the blue and green would be totally calm as GraySkye suggests. Yon silicon sapient might not reach blue or green in any particularly short period of time because… he’s still got… Read more »

I don’t think he was *happy*, per se. His rage was just tempered with guilt. I wager it will be awhile and require a rather dramatic sequence or two before we ever see him without the rage entirely. Everything will be a color mixed with red until then.

That’s kind of what I was suggesting towards the end of my first comment. Maybe not “happiness” but just less anger. Like his colors shift depending on what he’s feeling, but stays with a red tint because the anger hasn’t fully left him. Mixing colors will make things weird for other emotions, though. Like, if he gets a mix of red and green that would make…brown. Brown lights. Weird. At this point, I think the color shift is more related to his general state, like rage, depression, comfort, etc. Purple might have been him getting “comfortable” in his new environment.

Honestly, given his origin as a genocidal murder robot offering a warning before violence even when provoked is a step up.

And once again, humanity starts with the racial slurs before even getting to proper names XD

I laughed out loud!

https://cad-comic.com/comic/monikerd/ In case anyone wanted the comic where he got named this.

Thank God, people will finally stop calling him “Gizmo” in the comments.

Boxy McBoxface? Maybe he needs to run an internet vote to get his new name… as long as nobody tells 4Chan or Reddit.

Sheesh, for a non-organic, he’s sure temperamental enough to be organic.

…And we’re back to ‘Murderbot.’ Red suits him better anyways.