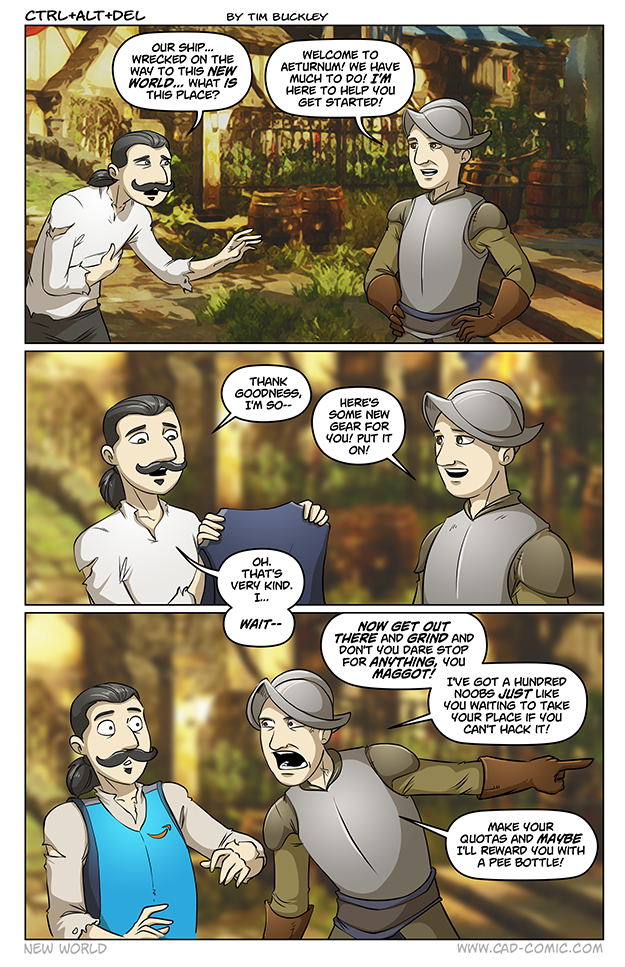 Master Of The Grind

MMOs and Amazon: it’s like it was meant to be. I mean, if there’s one company out there that has experience pressuring people into doing long hours of repetitive tasks for meager rewards…

Jokes aside though, I spent a fair amount of time with the New World open beta yesterday, and I must say… I was surprised. I was prepared to write it off as about five years too late to the MMO fad, but it actually seemed like a pretty solid game. I wouldn’t go so far as to say it’s incredibly innovative (I’ve seen most of the game’s features in various other MMOs over the years), but New World kind of blends them all together in a way that feels rather polished and competent.

I haven’t gotten to experience New World’s “wars”, which are the big draw, but I found myself really enjoying my time running around hunting and gathering, grouping with my faction (Marauders for life) and keeping an eye out for “oranges” and “purples” (the other two factions).

I’m not exactly sure I’m ready to jump into an MMO again, but in general I ended up spending far more time with New World than I expected to, and it may not quite be the easy pass I’d been counting on later this month.

It’s scratching the “new MMO” itch that I’ve wanted for awhile, that other games haven’t really given me. Also, with it being buy-to-play with no subscription, it’s gonna be easy to pick up and even walk away from for awhile and come back to later.

Found one of these treasures in a Hazmat Bin!

Unfortunately for me – or fortunately – my own MMO craze died out somewhere in 2006.

Mine died out a few years earlier. I briefly got into Everquest in high school and played for maybe a year in college, but I didn’t know anyone else who played and got into the classic MMO loop where you know you need a group to actually level at a reasonable speed, but you’d spend most of your time trying to put a group together from online randos and then inevitably people have to quit or your connection goes down. These days I just don’t really have the time for it anyways.

Hah, I know what you mean. I tried to go back a couple times looking for that same pure joy, where it just dominated my life and I loved every minute of it, but no MMO can do it for me anymore as I get older. I end up resenting all the things I loved about it.

Played the Preview, Closed Beta and got to play a few hours yesterday of the Open Beta. New World is my hope of an MMO that can once again get me back to playing one regularly. It’s certainly requires more polish, and mostly more content, but the Devs have seemed pretty good at listening to feedback and updating the game quickly. With Amazon’s backing – I hope it does succeed.

I thought we had moved on from stealing kills and loot in PvE but this has brought it back. I don’t need my grinding prolonged by that so refunded.

It’s actually done away with most of it. Most things if you get a hit, you get credit and loot drops are per person. Most of the “quest” drops from earlier Beta/Alpha’s that were limited have been changed to avoid those bottle necks. Amazon’s actually listened the those who bothered to submit comments during Alpha/Beta.

Beat me to it, but yeah, the kill stealing isn’t really a thing anymore.

Ooh great, I shall return.

They can’t steal your kill, but apparently “skin stealing” is the new norm, especially on things like turkeys with everyone wanting feathers for arrows. It’s kinda cheap, especially if you’re trying to play or level your ranged skills.

I gave feedback on this and have just becomes so used to Betas ignoring feedback, I’m mainly looking at you Ubisoft, that I just quit and got a refund. I’m about to go back in with the free beta in view of your reply.

Trying to load the beta was a wake up call for me. Looks like its time to finally upgrade this old PC…

ive tried many an mmo but i always come back to runescape. it may be a long grind but i actually enjoy the grind and the world. plus it doesnt always punish you for playing alone, only the really top tier stuff is designed around more then one person.

So you haven’t played the game at all and are making judgements on how tactfully it’s done based entirely on the company that made it?

I’ll have you know I judged the concept as fraught long before I learned it was Amazon making it!

More seriously, I do admit I’m very biased against it before having bought it. That’s kinda the point of gaming culture and media, right? To choose what to buy? I could definitely be wrong about this game, though.

Um… It is a game about colonialism and called “new world”… Even if amazon (the king of modern colonialism) wasn’t making it, this game would be an awful xenophobic mess.

I actually think the MMO genre is going into a resurgence now actually with WoW going down the crapper in terms of quality. FF14 is pretty much looking to take WoW’s place as the dominant MMO but it’s pretty much not requiring you to play nothing but that game which allows more flexibility to try out other games.

people say that but as someone who tried ESO and FF14 and basically every other MMO under the sun i find they all sad clones of each other. MMO genre needs something.. big to spice it up again

It scratches a lot of the survival game itch for me along with being a bit like a “3D Runescape” Going around, gathering, crafting, and leveling everything i can is wonderful and im not required to engage with a PVP system or balance that is so poor that playing solo is basically impossible on standard settings like every non-singleplayer survival game

My one complaint is that icons on the compass tend to get lost as more and more things get added to tracking, they all blend together and into the rest of the scenery.

I hopped back to FF14 a few weeks before it exploded, I don’t have the time for another MMO atm

so glad ive out grown MMO’s and not been back since 2004. its a money sink i just can not justify anymore. paying someone NOT to play? being time limited and grinding on a schedule? thats a job not a game.

A bit late, I know… I’ve been reading through the entire back-history and have just now finished! So I’m all caught up (although I gotta check out Analog and D-Pad now). Is there a way to get a notification when a new strip is up? It looks like it’s been just over a month since a new one has been here. That’s not a criticism, by the way. I know that it must take a lot of work and effort to put these comics out, Tim! I greatly admire your skill and the way you’ve stuck to it and even… Read more »