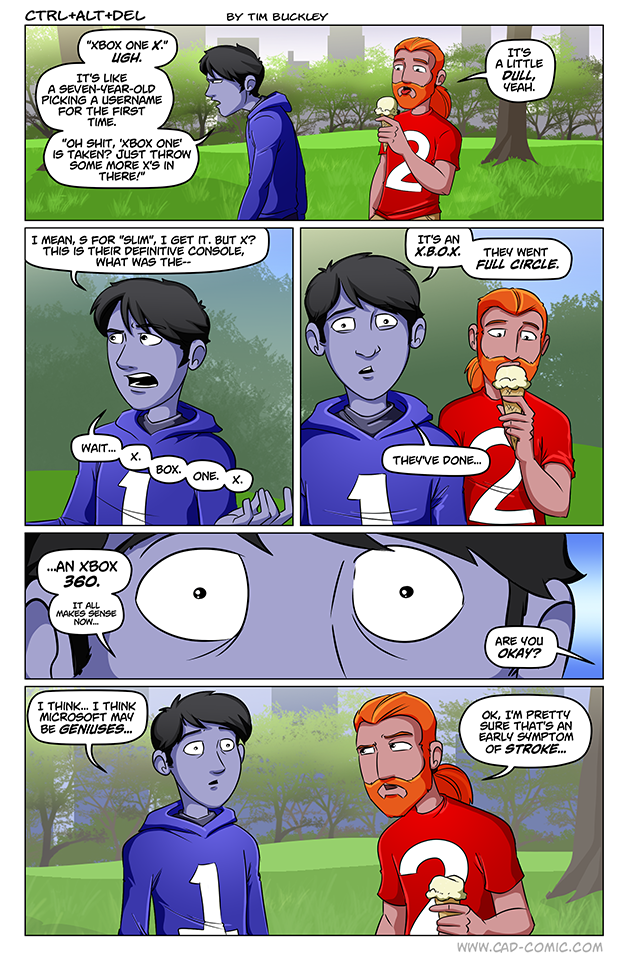 Maybe It All Makes Sense

Pretty sure I need to agree with Player 2 here

See, this is the kind of stuff I follow you for!

And Microsoft has made an art out of making so much crap that the more successful things look like pearls when they’re actually just shiny pebbles in a pile of dirt.

They still have terrible marketing division. Using Z would not make sense either, but would sound way cooler.

Not really. Half the world would mispronounce it as “Xbox One Zed” which is much much worse than Xbox One X.

And the rest would pronounce it as “Xbox Onesie.” Which is a lot worse.

Yay, E3 comics coming in. Hopefully some Console Wars soon. I wonder how the Apple-induced parts shortage that’s cutting supply of the Switch down would factor in to the comic. Apple’s not a direct part of the war, after all…

Say, that reminds me. What would e3 be in Console Wars? Something like diplomacy/espionage neutral zone?

An all-out three way warzone instead?

After all, they big three are pulling out all the products and they’re not pulling the punches…

Are you kidding me!? Diplomacy? Pfft, nuts to that. E3 is D day. Equivalent to to world war 2 trench warfare except it’s with all the new bleeding edge super tech that is experimental without the bugs worked out so you don’t know if it’s going to slaughter a whole battalion or blow up in your face. Nah I think the reason they don’t talk about E3 in the console wars is because that’s how horrific it is.

But games aren’t sold at E3. And we’ve had games with big reveals at E3 that turn out to be massive flops. It’s more like a staging grounds. A military parade, if you will. Like the ones North Korea has been fond of lately. A chance to show off the upcoming weapons at their absolute best, under controlled circumstances, in an attempt to intimidate the competition.

Or, in the case of the X.B.O.X., to show off the new soldier, all full of ‘roids, who’s going to march onto the battlefield with just his bare hands.

I believe it would be more of a neutral zone but acts as a Black Market Expo for better hardware or the latest cutting edge games where deals can be brokered (i.e. Switch and XBOX cross-compatibility support)

It’s a sign that Tim’s made something special with The Console Wars that every time I hear news about one company getting some slight advantage over another, I wonder how it translates to these little robots duking it out. Will we see that giant steel door in the Microsoft R&D lab open, only to see some sort of tiny sleek ninja? Or will cross-play with Minecraft and Rocket League turn into some sort of shaky alliance between the XBots, Switches, and the yet-unseen PC Master Race? Or will we see a sneak peek in a Sony tactics briefing, only to… Read more »

We have seen some stream soldiers in the war. I feel the Pc race are too spilt on parts and specs to form a coherent faction.

I believe Tim said in another comment somewhere that PC will not be seen during the Console Wars series, for the simple reason that PCs aren’t consoles.

Wait… but we DID see PC (A.k.a. mom) on a picture on Xbox soldier’s photo.

I know I am in the minority here, but the console wars never were my thing. I love everything else on CAD and have been reading them for years and years now.. But I tune out for Console Wars.

Fair enough. We all have different tastes. I myself dislike a number of his long running series, such as “The Campaign” and “Starcaster Chronicles”, until the website update made following them so much easier.

Thanks for that update, BTW, Tim!

What Apple induced part shortage? The only part shortage I know of is because people are buying up all the budget graphics cards for cryptocurrency mining.

Apple supposedly bought up all the Flash RAM needed for the Switch for their new iPhone. It’s a relatively low production part, so there’s a shortage, and Nintendo can’t get enough to make Switch systems to keep up with demand.

Sure, it’s symmetrical. Yay. Works great for code names. Recognition, to both insiders and outsiders? We’re going to be clearing up the miscommunications long after the X.B.O.X is dead.

I’ve been using the abbreviation XBO for years and felt like I was the only one!

I prefer XBOne, myself.

Because Robot 1-X was already taken by Futurama, which is literally what I think of every time I hear the name.

Micro$0ft and Genius = two oxymorons that will never meet….

My co-worker John mentioned basically this same thing to my other co-worker Pat. I blew his freaking mind.

It’s all the XBOXes.

anyone else look at the pictures and think it kinda looks like a PS2?

Nope. My PS2 looks nothing like them. Especially the logo.

Pronounced in German, it could well be an character of Asterix: Xboxoneix 😀

Someone at Microsoft thought they were so clever and then this comic came out and now everyone knows and that person is sad.

Welp. That’s the second thing to permanently break my mind.

At some point, someone said, “We have the S and now the X. So when are we getting the Xbox 1 E?” I’ll let you think about that.

*inception sound plays in the background*