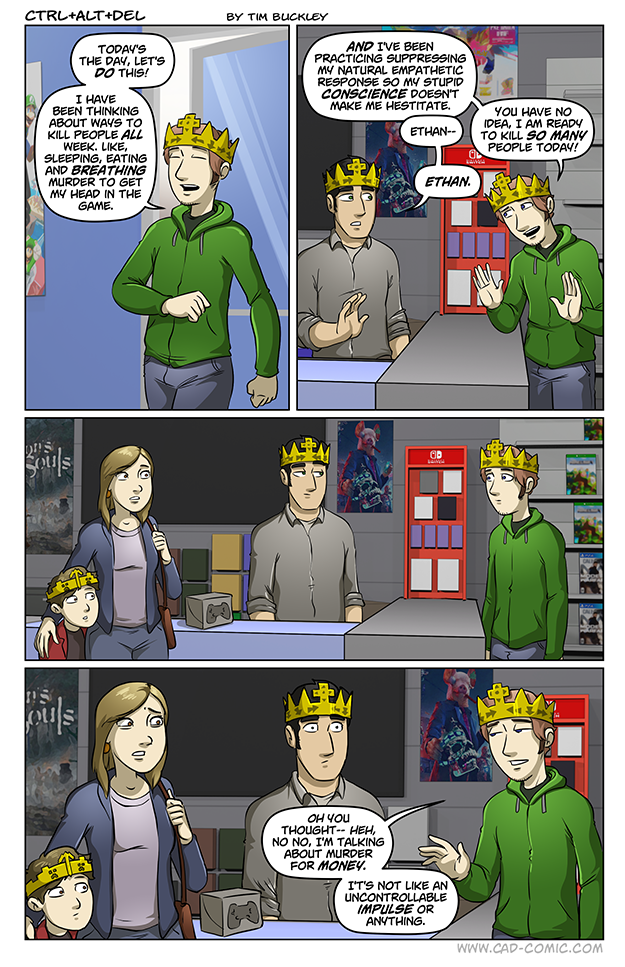 sure, makes it leagues better lmfao

If it’s for money, it’s ok as long you pay your taxes.

If your umm “accountant” can’t get you exemptions for 100% of your murder income doesn’t that constitute a reason for adding them to the list?

We COULD do that, but the IRS are more relentless in their pursuit of you than the police. Not worth the hassle.

Never trust your accountant. They don’t get client-attorney privilege like lawyers do.

That’s why you make sure you accountant is also your tax lawyer.

How can someone be so clueless?
… Wait! …It’s Ethan…

And I’m guessing that Mom doesn’t play anything, the heathen.

Seeing these crowns always makes me so happy knowing that IT is only a few days away.

Meh, she’s supporting her little sprog as he follows the only true path. I say we can put her down in the “Potential Convert” column and leave the torches and pitchforks for another day.

She does so! She plays Minecraft with him. And she *keeps on* playing when the kid goes on Roblox. Trust me. I’m that parent.

Well, I mean, as long as the murdering has ground rules…

I read a review the other day and noticed the launch date and was like WTF!!!!
Today is probably not the best day to have “Hitman” and “Assasination” trending on social media, while the US inaugurates a new President.

no thanks nintendo
Reply to  Michael Delaney

IO Interactive is full of bad ideas. In addition to what you described, they also decided to grab Tim Sweeney’s wrinkly old sack… of money… to make their game exclusive to the Epic Games Store, thus screwing all PC players from being able to bring their Hitman 1 and Hitman 2 levels with them. Also, there’s the ongoing bad idea in all of these games where there’s time gated content, so if you pay for one of the old games now, you get less content than people who bought it at launch. Oh, and the bad idea of always online… Read more »

foducool
Reply to  no thanks nintendo

Hobo
Reply to  no thanks nintendo

i’m a little confused, for hitman 3, didn’t they set up an account system with the developers that you can link all 3 games to in order to make the levels available in hitman 3?

Therefore meaning it doesn’t matter which platform you buy the games on, just so long as you bought them somewhere.

meh, another eg$hitlusive; aka hard pass

Backstory: Before Ethan walked in Lucas was just explaining to the mother that video games have been proven to not instill violent tendencies in children and have actually been shown to improve eye hand coordination and social skills.

Love Lucas’s expression in that last frame. It’s like he’s totally saying, “That makes it worse or creepier.” You can see the wheels turning wondering what kind of backlash is going to come from it.

Yep, I bet every gamer has at some point caused a similar event whether they knew it or not. My college roommate and I used to play 1v1 Counterstrike on occasion and we’d be shouting things at each other which could be heard in the hallway. A very confused father was like “is there some kind of gang war going on in the dorm?”

Will Ethan be resurrected and will he be with his wife and friend? Or this story will be about this dummy, which began after his death?