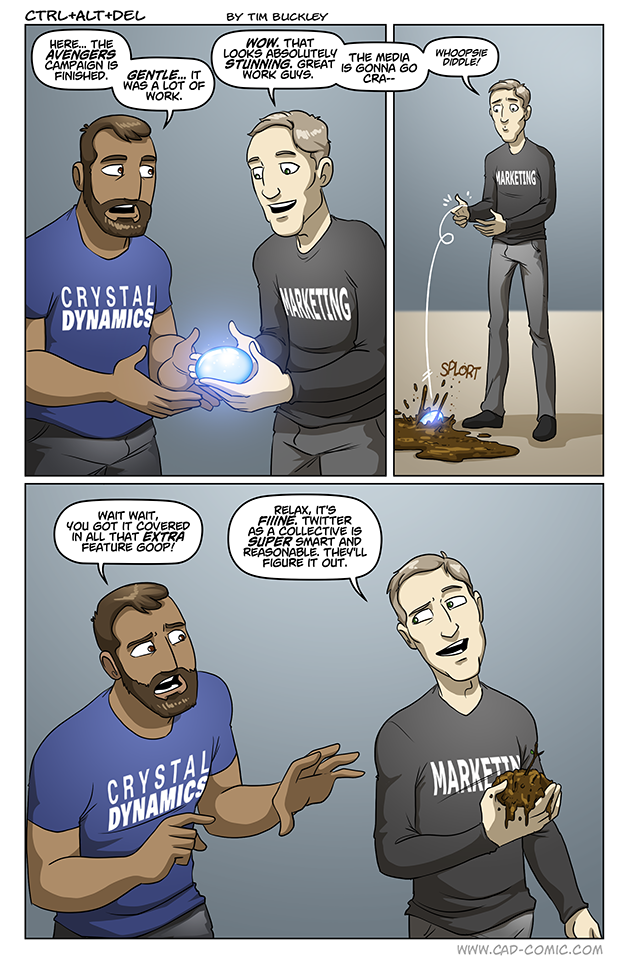 I was genuinely surprised at how good, cohesive and complete the Avengers campaign was, and from a lot of comments I’ve read, I’m not the only one.

It feels like, at least partially due to the way they doled out reveal information, not enough emphasis was put on the fact that this was, in fact, a game with a good-sized story that you can play through alone. The focus then became about how Destiny-like Avengers was going to be, and possibly skewed the expectation for the game.

And yes, the Destiny comparison is apt; the missions are structured for that certain type of gameplay, and once you finish the campaign, the bulk of the endgame is definitely Destiny in style. But when I compare the amount of time I spent on the campaign, to the amount of time I’m spending on superfluous stuff (challenges, collecting gear, etc), it doesn’t feel drastically far off from PS4’s Spider-man.

I played dozens of hours of Spider-man (it’s actually one of the few games I’ve Platinum Trophied), but only 15-ish of those were on the campaign itself. The rest was running around the city collecting stuff, or grinding out challenges and sidequests. Spider-man’s narrative was much tighter because it didn’t have to balance mechanics that also needed to work for a multiplayer mission-based looter, but the rest of the game was still a lot of repetitive mission-grinding (perhaps one Fisk hideout was in a slightly different warehouse than another, but it was still the exact same gameplay loop over and over).

Now, having played a lot of Avengers (through the campaign and into endgame), I really feel like they could (or should) have marketed the game differently. Frontloaded promotion of the game’s campaign more (because again, the story of reassembling the Avengers is solid, and Kamala Khan is an absolute gem), and then also revealed that the game opens up at the end for some ongoing leveling and challenges and expansions.

Instead it feels like the media coverage for this game was dominated first by the non-MCUness of the cast (a problem that also could have been nipped in the bud had they showed more of the campaign stuff early on because these Avengers are plenty likeable), and then by the fact that it was planning to be a game-as-service (which for a lot of people immediately means endless treadmill with no sense of completion or accomplishment).

But the campaign does provide a sense of completion. It’s a good 10-15 hours of narrative, where you can play as a variety of Avengers, face off against a big-bad, and then bring that story to conclusion. And you could stop there, the same way you could stop playing Spider-man after the campaign is done. But, if you enjoy the gameplay, you can then seek out more of that gameplay in a Destiny-style endgame.

Again, I’m not trying to downplay the core gameplay loop here, which involves running missions, finding gear, doing dailies and all of that stuff that, if you get into it, will far outweigh the time investment of the campaign itself. That’s definitely a big part of Avengers (and I enjoy it, but it may not be for everyone). I just think they may have shot themselves in the foot a bit by not playing up one of the game’s strongest features: the story. And you clearly can’t always decide what the audience at large is going to grasp onto as talking points, but having followed this game with interest since its initial tease, I don’t believe they were talking about the right things in the right order.

Even the beta, by cutting out an important precursor to the opening story mission, did not do the game justice. I think a lot more people would have gotten invested in the concept as a whole if they’d realized there was an actual narrative to follow, and not just a loot grinder in a super hero suit.

that last sentence killed me ahah

And how did that ‘goop’ get there in the first place? Who Was on the marketing and design teams that tracked it in with them?

The rAt
Reply to  Crestlinger

Gwyneth Paltrow did it.

Michael
Reply to  The rAt

Is the mud vagina-scented, then?

I was saying exactly this to a friend who cancelled their preorder. The story and characters in this game are excellent. Kamala is far better focus character than I would have expected, and her scenes with many of the Avengers cast are superb (such as the road trip cut-scene with Bruce, which gave me TLOU vibes).

I’ve not finished the story yet but I’m thoroughly enjoying it – way more than the random contextless drop zones I was forced to play in the beta.

Dunno, the beta didn’t amuse me (Ms. Marvel and Black Widow were quite fun to play, but Thor and Hulk felt slow and dull – they could at least make big leaps – and the missions were meh) and really left me with no will to play the full game.

The Beta was ok but didn’t feel like I’d be willing to pay for the full price. After this review I might reconsider, thx 🙂

Right now I’m too busy playing Wasteland 3, and too many interesting games are coming in the next months, so I’ll play when it’s cheap on a sale.

Destiny always gets a bad rap and it is NOT DESERVED AT ALL. Destiny 1 and 2 are fantastic games.

I wouldn’t say that. It does deserve some of that reputation but it is too harsh I think.

seriously, I played both, then I played warframe, never coming back to destiny.

They are fantastic games! Just zero fun to play after like…. 30 minutes. (and yes, I have played more than 30 minutes. It is the only game my two brothers play, and it helps us keep in contact)

not much of an avengers fan so while i do love a good story if the mechanics dont fit for me id have to question it. the last comic kinda sums it up for me…why are the heros doing missions for loot? if you were shield agents id kinda understand, but the heros?

Hard to find praise on game where it’s still has major bugs. Like not letting you finish the campaign, or game play where the least effective synthoid can do the most damage to you. Or right after you build up your special powers, one shot from a laser and they’re gone and you have to wait until you can use them. I especially love how if you have the game on easy, and challenge level 1, which should mean a relatively easy game to play, you get your butt handed to you 30 seconds into going up against the bots… Read more »

is the game as good as warframe?

Well I have a glitch that prevents me from progressing the campaign sooo that’s not fun
/ :

I can understand why someone would like the grind post game. I myself am an avid destiny 2 player and always do the grind even though I hate it. Why? Because I think the gameplay is fun. When I played Marvel’s Avengers, I expected to be able to do some superhero shit, not build up meters, not keep on hitting bullet sponges until they die, not replay the same 3 loops of game play over and over again. I expected something different from destiny, but it was not. To me, this game was not a breath of fresh air, it… Read more »

And absolutely none of that matters to me, because Square Enix entered into a deal with Sony to deny Spider-Man to PC and Xbox players. I prefer to play on PC, so Square Enix will never sell me a complete game. And I will never buy the incomplete game they wish to sell me. Plenty of other games coming out with a sizeable campaign that aren’t denying content to players who are playing on the “””wrong””” platform. I’ll go buy and play those games. (And no, Sony Simps, Sony does not own Spider-Man. Sony Pictures owns Spider-Man film rights, Marvel… Read more »

ChefBrianWasRight
Reply to  no thanks nintendo

They are selling you a full game though. You can put the game in and play from start to finish without having to use Spider-man. In fact if you own a PS4 and play the game at the moment you can’t play as Spider-man at the moment anyway. Spider-man is one additional character that will be added at a “later date”. It is entirely up to you if you don’t want to purchase this game purely because you can’t play as Spider-man. But don’t try and make out like Square Enix and Sony are some big evil corporations trying to… Read more »

Author
Tim
Reply to  no thanks nintendo

So what’s your plan here, to repost your argument word for word on every comic I do about this game? We’ve already HAD a discussion on your purposefully antagonistic point of view that it’s “not a complete game”. As someone who’s ACTUALLY played it, it feels very MUCH like a complete game. A game that we’ll get additions to in the future. One console may get one EXTRA addition over the others, but that doesn’t change the “completeness” of the baseline game.

Eldest Gruff
Reply to  no thanks nintendo

I understand being frustrated that there are a few features locked off to certain consoles, but dang, exclusive content has been around ever since competing consoles were similar enough that they could be playing the same game. It’s part of gaming, and this one doesn’t seem ridiculously unfair at all.

I don’t suppose it would be too much to hope that Crystal Dynamics can be allowed to close out the Legacy of Kain series finally while some of the original voice actors are still alive?

I just wanna say your timing has really improved. Instead of SHOWING Twitter’s reaction to it, you leave it at insinuation, because we already know what happens (Or “happened,” technically) after. Your writing is nowhere near as excessively elaborative as it used to be (Like that Puzzle Quest comic). GG.

I do about this game? We’ve already HAD a discussion on your purposefully antagonistic point of view that it’s “not a complete game”. As someone who’s ACTUALLY played it, it feels very MUCH like a complete game.