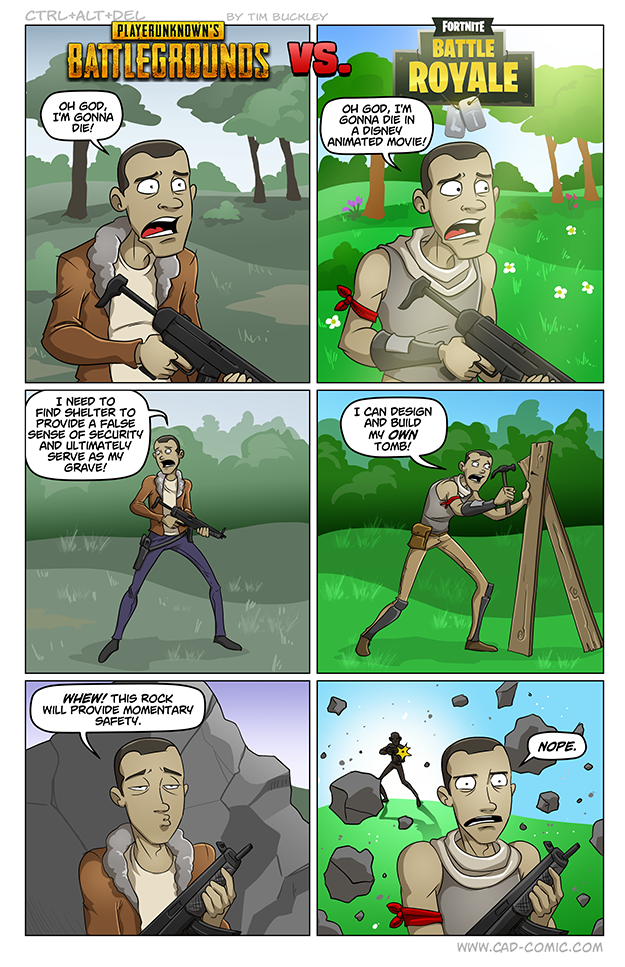 Everything is destructible in Fortnite’s PUBG “homage”, which is both the most amazing thing and the worst thing, depending whether you’re on the receiving end.

I’ll admit, the building aspect also adds a neat twist to the battle royal format, and I’ve seen aggressive streamers make really clever use of it in battle.

Overall, though, I’m still not convinced I would choose to play Fortnite over PUBG on a regular basis. I think I prefer “simulation” over “arcade” for this sort of game (also the reason I never got into King of the Kill). But Fortnite’s take on the mode is better than I expected, and despite actually removing a lot of your safety, ends up feeling less… tense? As a result of the more stylized tone of the game.

Have you given Fortnite’s new mode a try? Do you prefer it to PUBG? Are you worried that battle royale is our new DayZ/survival sim, and we’re about to be inundated with every game under the sun jumping on the bandwagon?

I’d sooner play Fortnite than PUBG simply because Playerunknown and Bluehole are assholes. PUBG is a game where you can get banned if a crybaby streamer who can’t accept that they aren’t perfect at video games accuses you of stream sniping. PUBG is a game that thinks microtransaction loot boxes are okay in an Early Access game; they would rather monetize their playerbase further than focus on finishing the game. And of course, now their petty accusations against Epic. Which is great because they did a pretty good job of advertising their competition to everyone and I can get in… Read more »

So you are saying you don´t like a game because you got banned in a stream? Which is only reinforced by your need to mention it one more time at the end – maybe just grow up and get on with your life?
Also you are not forced to buy crates in that game to play it.

I understand the kneejerk reaction to “offering microtransactions while in early access”, but the logic also kind of falls apart if you dig any deeper than the surface. 1) If you’re playing PUBG, you’ve already decided you don’t mind paying good money for a game that is admittedly still a work in progress. You’ve already crossed that threshold. But you draw the line at them… trying to make money while the game is still a work in progress? 2) In the case of PUBG specifically, that game launched in a far more stable, polished state than most Early Access titles… Read more »

In general, I don’t understand being salty about companies trying to bring in money. It can be done badly for sure, but people seem to get mad simply for the microtransactions being there even if purchasing them is completely unnecessary for gameplay. Microtransactions for cosmetic gear should be the holy grail of monetization from a gamer’s perspective. If you want to be salty, look for games that require pay-to-win.

I think that if the paid lootboxes offer clothing like in Tim’s comic a while back, then there is a problem. I have only played PUBG a few times, I think I unlocked a grey shirt instead of a white one…

If the lootboxes give you actual camouflage or clothing that will blend in, then you are already bordering on Pay-To-Win. If you cannot get seen, you cannot get shot so you last longer.

I think the issue is that we were promised no microtransactions in early access, and they broke that promise. Many players would’ve been fine with it if they had them from the start, but the way they did it makes it hard to trust the company. At the same time though, I think people are being too hard on Bluehole about their complaints towards Fortnite. The issue, from what I’ve heard, isn’t necessarily that they’ve been “copied” (nothing new under the sun and all that), but specifically that the people who make the engine they’re using are direct competitors. Which… Read more »

Yea its a war game if your going to tell your enemy what your doing why shouldn’t they use that to their advantage. You can sure bet your assets a real world enemy would

Um. Fortnite is a game with RNG lootboxes too, ones that revolve around obtaining new heroes/guns/survivors/etc. in the PvE game. It’s abused the Early Access title and has falsely advertised that it’s a full game at retail stores/on the Xbox Arcade or whatever. FUBG will get its own lockboxes soon enough that sell cosmetics, don’t you worry, and Epic will almost certainly find some way to milk people as much as possible with FUBG given their track record with Paragon and how heavily they’ve reamed their PvE playerbase with RNG in what they’re now calling ‘Save the World’. Let’s not… Read more »

also, it has been confirmed that the company accidentally enabled cross platform play the other night. for several hours xbox peasants and ps4 serfs were able to play together.

I havent played pubg yet (i know gasp! i want to i really do) but i have been playing fortnite for a while so i figured i may as well give battle royale a go. I love the building aspect and that you can set traps. It is definitely different than pubg (i watch a ton on twitch) that being said…is it just me (as i havent played the other) but the environment seems to close so fast!. I played one that pretty much as soon as i landed I was running the entire time just to keep up with… Read more »

I think the map in Fortnite is a lot smaller, so that’s probably the reasoning behind no vehicles.

1. I haven’t really heard of Fortnite until now. I might read up on it. ((Then again, I haven’t played PUBG either, but at least I’ve seen Youtube videos of that.)) 2. Fortnite certainly seems interesting, but if it’s just PUBG with a more bright and colorful style + building and destroying things, not really too interested. 3. I wouldn’t have a problem with it becoming “the next DayZ,” but then again games like DayZ and 7 Days to Die were interesting for me back whent hey happened. I wouldn’t be complaining if they managed to make a comeback, nor… Read more »

not to go off topic, but I was wondering when your going to get back to Analog & D Pad, and Starcaster Chronicles?

I’m not entirely sure he even knows when he’s getting back to either of those.

I know he’s been doing a bunch of Ethan and Lucas “side-storylines,” showcasing them in their day-to-day activities. Nothing about returning to the main story, however.

I’m chipping away at AnD issue #5, trying to get to a point where I can just start posting the pages and then continue working on them as they update from there.

Him.
Reply to  Tim

Any chance we could skip Starcaster? Because that usually means I can skip on checking this site for a month or so (and then browsing back to see if I missed any non-Starcaster comics).

Sure, you get everyone that enjoys Starcaster to agree to cancelling the series just because you don’t think you should have to simply ignore something you don’t enjoy, and I’ll never draw another Starcaster page again. 🙂

For the record, I -love- Starcaster. ?

Burn ? got to love his witty skills that’s why the comics are so good

Hi there, bit late on the reply but anyhoo… got a list with people who enjoy Starcaster? That way I can thr… persuade each one of them personally.

P.S.
If that list were to contain home adresses that would be great!

Haven’t played PUBG and don’t want to with the stuff I heard about it. I was tempted originally when it first came out but decided to hold off to see where it goes. I can safely say I’m glad I dodged that bullet there. I’m not getting that game even if it’s on discount. With Fortnite I haven’t gotten either but my gaming library is pretty full and it just doesn’t appeal to me enough to want to get it and play it over other games I have right now and I don’t want to add more games to my… Read more »

Thanks for the update.

I will admit to not having played the released version of Fortnite. That’s only because during the beta periods it just seemed to keep missing the “fun” factor with dumb design decisions. Just my opinion though.

PUBG is awesome, forget about the nay-sayers. You don’t have to buy micro-transactions if you don’t want to, and they make zero difference to the game except cosmetically so not like anyone is getting ahead if they have a fatter wallet than the other guy/girl. Fortnite interests me, as I love those sandbox type games but I’m not sure. Wish I could try it without paying full-price, PUBG was pretty easy to know what I was getting into when I paid for it so no problem there, but Fortnite is a bit more complicated plus I know it’s co-op mainly… Read more »

I didn’t have to pay anything to play Fortnite, so I’m quite enjoying it.

Wait since when is fortnight Free to play

The Battle Royale mode (in the comic) is free.

So recent news from the developers of fortnite say they are adding vehicles, more maps, and since its come out they have already done 2 bug patches, which is a quick response time. Until PUBG gets to PS4 and XBox fortnites a pretty good substitution.

I think we might be surprised of the Fortnite success in near future, since it gives chance to play to people with older HW. I don’t think it will be an ultimate game changer, but it surely will attract players, who cannot or are not willing to buy better HW in order to be able to play more performance demanding games such as PUBG.

Another prediction that turned true.