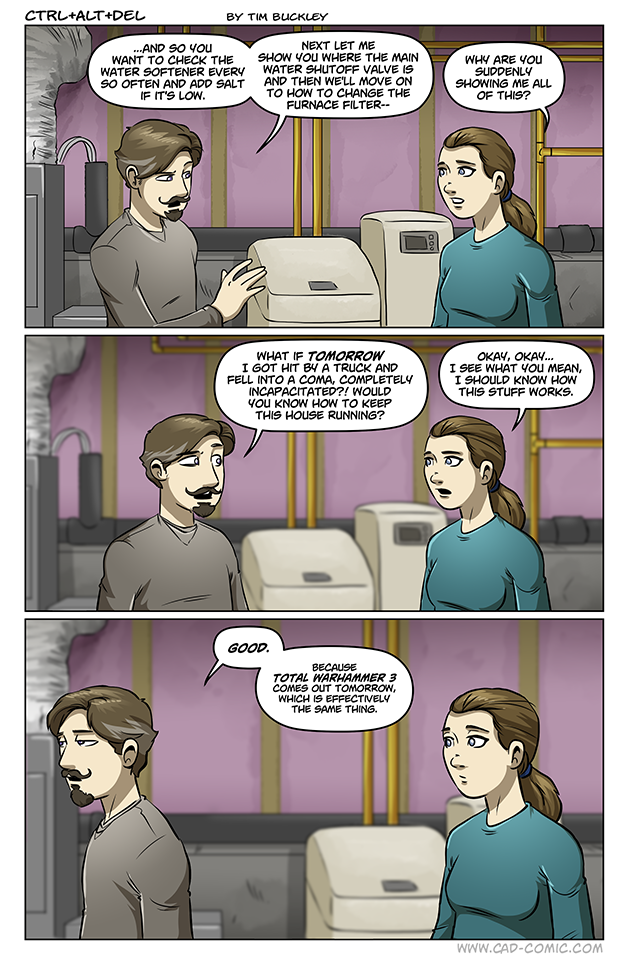 So, are you actually freaking about your own mortality, or did you make it a gaming joke. Either way…Calm down and take it a day at a time. well with the gaming, maybe 4 hours at a time. Hope your doing well.

Skull the Troll
Reply to  Jesse

no thanks nintendo
Reply to  Jesse

Thank you for being a person who can see both sides, and cares enough to say anything. <3

I like a man who’s got his priorities straight.
On a completely unrelated note – somehow “The Shining” made it impossible for me to see boiler rooms as something normal, they all seem menacing to me.

I remember seeing a boiler room in an old apartment complex when I was a kid, before having seen The Shining, and I thought they were sinister AF. Adult me still isn’t convinced they aren’t powered by the souls of the damned.

Oil and gas furnaces are most certainly powered by the damned. Dinosaurs. 🙂

The furnace from Home Alone still gives me the creeps… and that was over 30 years ago!

Dinosaurs only count as fuel after decomposition in a good tar pit….

Boilers are menacing to me. They are ticking time bombs just waiting for one bolt to come loose to cause a catastrophic failure and explosion, destroying everything around it in a ball of super heated steam, fire, and metal. Absolutely terrifying machines.

You’d have loved my old apartment building. When the boiler had problems, it vibrated the whole building like the diesel engine on a ferry. It also made the radiators so hot you’d burn yourself if you touched them.

I didn’t see “The Shining”, but you reminded me of a boiler in “Vampire the Masquerade: Bloodlines” Ocean House hotel (which I’ve read is based on “The Shining”) – if you played it, is it about the same?

Oh wow thanks for the heads up on that. Kind of horrible timing for me, I’m not gonna be able to carve out time to play it for like two weeks. That’s gonna be rough. I might have a few hours free, but without 16 hours straight to play, are you really getting the true total warhammer experience?

In these times we live in, everyone should be expected to know how the house runs. Not just “the man”. Equality between the genders is what we want, also in the areas usually thought of as “man stuff” amirite? =P

All very true! But I wouldn’t mind a comic about how to load the washer-dryer evenly and how to fix the on-off leaky bathroom pipe with the genders reversed. Statistically more home maintenance is taken on by female partners than others, so it’s funnier if she’s the one loading it all onto him for a few days’ play than the other way round.

Already preloaded. Took off work so I can’t wait for the clock to roll over too 3am. Tho I work 3rd shift so I’m normally up at this time. So it’s not quite as bad as it sounds. LoL

Extremely good reasoning 😀 …. also, great setup and stuff, especially the water softener. Changes SO much more than you’d think …. not only less chalk and stuff, which is already great…. but the general taste and feel of water and use of detergent/showergel and stuff is such a big big bonus 🙂

no thanks nintendo
Reply to  Arcdar

That occasional shower where the softener hasn’t been run in a while for whatever reason is so gross. 🤮

I miss living in the country where our well was 140′ down in sand and we got amazing water – very rare any sign of even minute coliform, no city ‘tastes like bleach or sulfur or iron’ water, and cold and no necessity for a softener. That was the best water I ever had the joy of in any house or apartment I ever lived in.

Am I the only one whose wife is the one who knows how those things works? I know how to manage budgets, but no idea about furnace or how to properly manage the fire on a barbaque

My husband and I have a pretty neat division of responsibilities in that that I take care of our electronics — PCs, servers, network-setup, home-automation, any custom self-built devices and so on — and he takes care of the noisier, dirtier and/or stuff benefiting from more physical strength, like e.g. all the outdoors maintenance.

My wife takes care of the numbers-stuff, as well as most of the stuff that needs accounts, subscriptions, settings, etc. Like, I have a vague-ish idea of how our DVR works and Fire TV works, and if something were to happen I think I’d probably have a good idea of how to find out what bills are due when.

I handle all the icky, gross, smelly, sweaty, chemical-ish, whatever stuff. On no uncertain terms. She said it was a condition of marriage (probably a joke…?). Except when kids started and had to deal with diapers; that’s a two-person job.

i hope you got some syringes on sale, for when you shoot wh3 into your veins! <3

This is me… except I’m installing the water softner in between TW:WH3 turns.

thanks for reminding me to do this. my wife needs to know.

Meh. Wake me when they make a Total Warhammer 40k.

Total Warhammer 3? Pff, I would never be “incapacitated” by … THAT!

Ehm … cancel all my appointments and tell everybody, they don´t have do be concerned about my whereabouts, I´m still … well … here.

AND DON´T TALK TO ME FOR THE NEXT WEEKS, I`M VERY BUSY!

“Tell them I’m spending a week or two dead for tax reasons.”

three games in the series and i still cant get a review that tells me anything other then “oo pretty mecha animals and scenery”. i need something more then “pretty” to play a game unless its of a very specific kind.

Well, you get to blow up robots by shooting fuel canisters on them, that’s a good time. And it’s exceptionally satisfying when you land that perfect shot on a robot’s one weak spot. I’ve only played the first one myself, but they *are* right about the game being gorgeous. I really enjoyed just running around the environment exploring the world and sniping robots when the whim struck me.

i was half expecting something isekai related, wasnt far off

That’s me when Triangle Strategy comes out…

I should do the same prep. For me, it’s Horizon coming out tomorrow!

random thought : how many approval sketch drafts went through wife approval before wife approved being visually in these comics 🙂

I could understand if the game was Horizon Forbidden West…

I pretty much told my wife I was going to be unavailable.

Same for me and the New Horizon game.

This comic made remember that I enjoyed my short foray into TWW1 and that I actually own TWW2. So I fired the second game on Friday… and I can say that this comic is too accurate.

me when a new hunt:showdown update comes out lmao