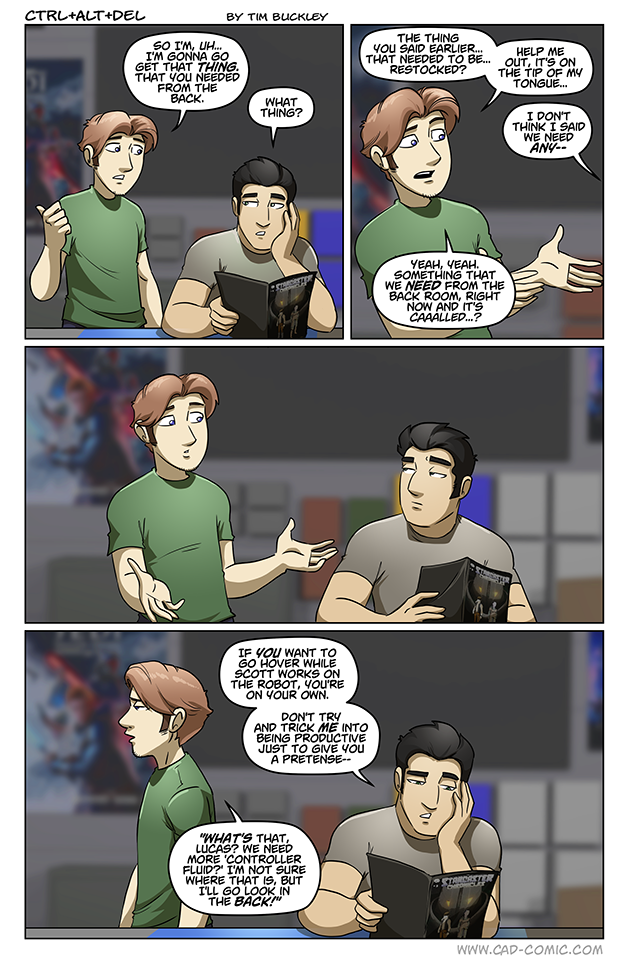 Probably about the same way I feel about Iron Man being an existing IP in this universe, except I’m not getting any royalties.

Lucas has good taste in reading. In fact, I suggest everyone buy into the comic!

Didnt want a cease and desist from Rooster Teeth for using headlight fluid and elbow grease?

Maybe he’ll come back with the flag…

I think that joke was around before them

Dammit, I forgot the bacon-stretcher. go borrow one from the next camp will you?

Yea sure. My bacon -stretcher is between the skyhook and bucket of steam. If you see the left handed screwdrivers and 710 knobs you went too far.

“Headlight” (or, rather, the *original joke* turn-signal/blinker) fluid has been a joke/prank since shortly after they were invented. RT can’t claim jack on either!

Don’t even get us started on how long “elbow grease” has been a thing.

no thanks nintendo
Reply to  Tonkin

Headlight fluid (rather, turn signal/blinker fluid) and elbow grease existed way before Rooster Teeth. Also, neither of those make sense for a gaming store.

Analog & D-Pad is an ongoing Superhero game The Players from The Campaign are playing.

The Starcaster Chronicles is a popular comic book series published in the world of A&D.

The Console Wars is a children’s cartoon in the world of The Starcaster Chronicles, telling stories of a planet filled with robots that war for ages.

The Campaign is a series of religious stories and epics in The Console Wars; describing what biological “players” are like, who they are, how they interact with games, and each other.

It invokes the same paradox from that filler comic in Spinnerette where 3 versions of the main duo enter a comic shop and read a comic about each other. That is to say, I love it.

And then in The Campaign is the CAD: The First Ten Years boxset

It’d be funny if in the CAD universe, the main character was named Tim Buckley, and the artist/author was Cort Ryder.

I am expecting Scott to accidentally discover Not Zeke is made out of an Xbox and Ethan spending the next few comics playing Halo on him. If you think the Flood is hard on Legendary, try it when they are controlled by something that ACTUALLY wants humanity dead.