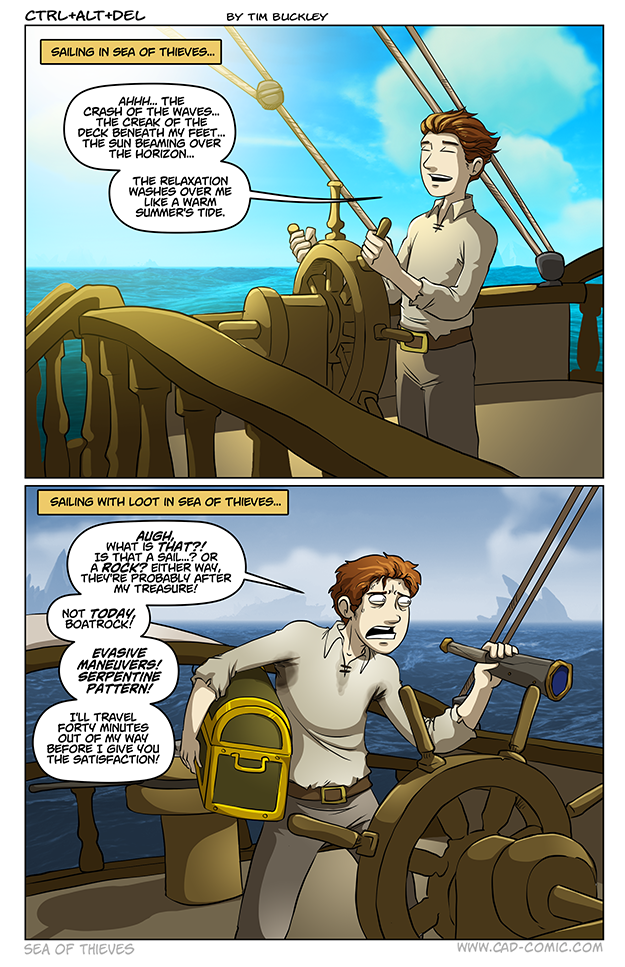 Happy New Year, everyone! Will this one be better than the last? I doubt it, but there’s always a chance, right?

I’ve recently gotten back into Sea of Thieves (again), a game I first started back in the beta of early 2018. I enjoyed it a lot back then, even though you could argue it was, at best, the foundation for a game rather than a fully-fledged game itself. Regardless, I had a lot of fun sailing and plundering with friends and strangers alike. I found it to be a game of moments, if not substance at the time.

And over the past nearly three years now, it has become a game that I find myself constantly returning to. In the quiet moments, the lull between other new releases, I always gravitate back to Sea of Thieves. And even in the interim, in those stretches where I’m not actively playing, I follow the game’s updates with genuine interest. Like other games that launched only partially baked (No Man’s Sky, for instance), Sea of Thieves has spent the last few years constantly adding to and refining the game, turning it from merely a bare foundation into something resembling a structure you could live in.

The core gameplay loop is roughly the same as it was back in 2018, along with all of its charms (or faults, if that’s how you view them). You sail around, and collect or steal treasure, fight or avoid (or befriend) enemy crews, all in the name of creating fun memories, (which is how I’ve always viewed the purpose of a game like Sea of Thieves). There are now more ways to find and hunt loot, more ways to battle, more ways to earn huge piles of gold, and a lot more refinement to all of the systems interconnecting them… but if you’d previously played Sea of Thieves and not been enamored with the prospect of setting sail, and trying to get your hard-earned (or hard-stolen) loot back to sell, I’m not sure I could argue you’d feel differently playing it today.

For me, what Sea of Thieves does just hits right. There are few games that have so deftly combined the feeling of soothing calm I get from sailing the virtual waters of the colorful and cartoony sea, with the sheer pins and needle of anxiety I get from stacking more and more loot on my deck, knowing that until it’s turned in, anything could happen. Seeing sails pop up on the horizon when I’m carrying piles of loot still puts butterflies in my stomach after all this time, because it means the outcome of the next twenty minutes could go any of a dozen different ways, and every single one of them will be a story to tell.

I’m always happy to see when a game with promise is able to stick with it, survive and even thrive given the chance to realize that promise. Sea of Thieves is one of those games for me, and it’s a game I’m always excited to dive back into, whether it’s for a few days or a few weeks at a time.

I don’t like SoT – don’t get me wrong, I want to like it really badly, but the constant PvP and griefing is just not my idea of having a fun game. I’m trying it from time to time though, but in the end it’s always the same.

Anon A Mouse
Reply to  Alexander B

Nothing wrong for not liking a game for exactly what it is. I’ve loved No Man’s Sky since it’s launch and since they’ve only added fluff and kept the core gameplay loop essentially the same I still play it to this day, much like how Tim describes his time with SoT, but I 100% understand why someone would not be able to play it for more than an hour or two.

ghost of the system
Reply to  Alexander B

Yeah thats exactly the reason why I dont give it a shot, even if I have looked at it for far more then 3 Mississippi´s from afar…
I hate (not feeling soso, I HATE) unregulated forced PVP.
I dont mind loosing a fair fight but this kind of gameplay usually invites the kind of loosers I dont want to spend my free time with.

I didn’t play for long, but my crew and I never initiated hostilities, but we always ended it. There were some close calls, but my blunderbuss never failed me.

Is it just me, or is the “Daily Esports wrap up video” has been the same “Day” for months now?

Should’ve just hung out with those stupid-ass mermaids…

The outpost seems to be directly behind you, Captain. Turn the ship around!

…I feel called out by this.

I really really wanted to enjoy Sea of Thieves, so bought game for myself and friend he in turn purchased for his SO, that way we could immediately start up at troupe. game loaded after much gnashing of teeth against the xbox login, start “tutorial” progress! ship sails in I drop off loot so far so good, beautiful out on the seaI admire while standing on the beach watching the sunset I die. huh weird. respawn back on ship i proceed to head inland and retrace. no clue as to death until I see a guy running around on the… Read more »

This embodies everything my husband and I experienced yesterday lol. It’s almost as if you were there with us because during our 12 hour marathon we saw not one but TWO rocks that looked likes ships that we freaked out over. I hope we run into one another on the seas and peacefully pass by each other without incident! I also agree with your comments fully! This game has evolved beautifully and I’m glad they have made such leaps and bounds in development. I wanted a true pirate game ever since I played Assassins Creed: Black Flag, and I feel… Read more »

KaBOOM is a classic. I remember watching it when you first uploaded it. It made me want to try Sea of Thieves, but my brother talked me out of it. I’d love to see you stream this game again.

SoT is a great game that i’d love to play… but the pvp is not for me.

I love Sea of Thieves, but the community is extremely toxic. You don’t even need to have loot for people to attack you. Besides, the vast majority of PvP aren’t interested in getting your loot, they’re only doing it to be harassing and toxic.

There’s also ZERO anti-cheat in the game…and I’ve noticed a lot of cheating. One shot pistols, rapid fire cannons, people flying through the sky to get to your ship (NOT being shot out of a cannon, just people flying around and then dropping on to our ship), and god-mode.

I do about this game? We’ve already HAD a discussion on your purposefully antagonistic point of view that it’s “not a complete game”. As someone who’s ACTUALLY played it, it feels very MUCH like a complete game.