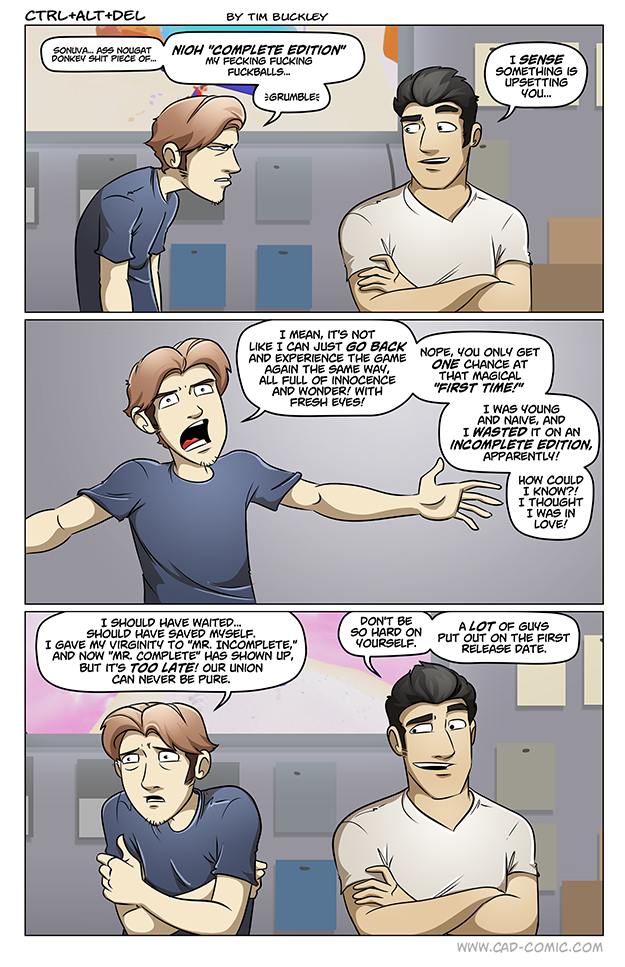 That is why I have been saving myself for Horizon: Zero Dawn – Complete Edition. It’s almost out. Not much longer, but it has been difficult.

And then there will be Horizon: Zero Dawn – Complete Editon Director’s Cut GOTY

Hey.. Tim, You should draw this instead!” *gets tosses out window*

Personally I can’t wait to see more console wars, but I also like analog and D pad. .. your Star series is also good.. Hell, I like almost everything in this reboot personally.

I’d be curious to see how the first year of the Switch played out. With the monthly influx of huge titles, including multiple Game of the Year contenders (would these be more handguns, like Zelda, or massive, landscape changing nukes?), to being the best selling console every month since release (except for two months when it was supply constrained but still sold out), there seems like a lot of potential material. How about the influx of indies seeing massive success? Armaments and munitions normally held exclusively by the “PC Master Race” (which held itself aloof and apart from the bloody… Read more »

Most games aren’t Nukes but they may be Rocket Launchers or maybe semi-autos.

Has it really been since April? 😮

Maybe to rekindle that inspiration, I’d love to see another The Campaign series. 🙂

but what about the secret weapon “XBox One X”?

Actually.. it’s the console wars comics that I skip. I love Ethan strips 🙂

I LOVE the ethan comics

Weird, cus I only read the Ethan comics. They are the only ones worth it…

This sounds like Total War : Warhammer Mortal Empires to me 🙂

The game is so rushed its silly…. and the AI just clearly hasn’t been programmed to deal with ANY of the new features…. or even some of the old ones…..

That is me every Borderlands game. I beat it, sell it, then buy the GOTY 6 months later. Starting all over

I feel kinda the reverse about FFXI. That’s the game I gave up my MMO virginity to, but over time it changed, and we grew distant. It stopped trying to hold up it’s side of the relationship, until I finally had to ask for a divorce. Of course, it got custody of our children. 🙁

I gave FFXI 9 years of my life, lol. I ended up quitting March of 2011. I feel the game was ruined when you could just join a party and walk away and come back 8 hours later to a level 85+ character. I worked for months to get a character to 70+. Appropriately geared, skills leveled, spells purchased, everything needed. Then the expansion comes and you see people just camped out getting max leveled characters in no time.

Heh, that’s what I meant by it changed and stopped trying 😉 . They had dumbed it so much down to WoW levels. I know they’d mainly done that because they were ramping the game down, since they expected FFXIV to take the ball and run and FFXI to shut down not long after, but that flopped massively and they had to somehow backpedal in FFXI without being able to take away all the changes they’d made. They had to add new things back in to give people a challenge and keep them interested, so they added those new grind… Read more »

Him.
Reply to  Jakk Frost

It’s kind of funny how they’re putting more importance than ever on release sales while pretty much guaranteeing that I won’t buy a game until three years later on a 90% discount.

My feelings exactly. The only reason to buy a game early is if the content is online based (like a Call of Duty, etc.) and you need the extra time. Most solo games, we’ve been conditioned to wait for at least the GOTY edition, or a few years later, second hand.

And of course, most major titles are essentially in “early access” without calling it early access for the first year anyway. Have to wait for at least one major patch before buying.

That’s kind of the fun of a Beth game though, playing it when it is the most hilariously broken.

This is why I generally wait a little bit. Let the first wave of hype subside, and by then the game will have been patched and if it is for a console or a handheld it has often dropped in price by like 5 bucks. Better to wait briefly than to feel ripped off.

Does anybody else hate DLC for that reason? By the time DLC comes out, I’ve usually beaten the game and moves on.

Depends on if it’s a good game, and if it’s a good story-focused DLC. If those things are working for them (like Elder Scrolls expansions, for example) it feels like returning to an old friend. Otherwise, it just feels like a cash grab.

Story based DLC is usually only a couple of hours worth so not usually worth jumping back into.

The old expansions that were released years ago were usually an equivalent games worth of content for about half the price of the original game and were worthwhile.

…and that’s why I always expect for the GotY edition.

So are we back to the old CAD universe now, with Ethan being a quirky quirklet and both being perfectly mundane shopkeepers? The crimefighting seems almost like a distant dream, now.

This is E&L’s normal lives in the 2.0 timeline.

Actually, this is still 100% a part of Analog and D-Pad Timeline. They’ve got normal lives outside of their superhero lives.

Hey Tim
In the end, what happened to the timeline where Ethan sacrificed himself? I feel like this is just not it.

It’s a different timeline.
Also, right after Tim showed a hint of what happened.

I know, but it just doesn’t feel the same as the older timeline

The ending is kinda vague though, like is the baby Ethan’s or Lucas’s? I’ve always wondered that.

We do not have any pop-up ads on this site. We have a video ad, but it takes place in the same browser.

@Tim-
I usually read your comic on my phone – and those “video ads” turn into “full screen face fucked by the ad until you can get it to close” kind of things.
Just letting you know that you may want to discuss the mobile ad setting a bit more then.

I can certainly look into it, but they’re pretty small on my phone. What sort of phone/browser are you on?

Part of the problem for me is clicking the close x doesn’t work, instead it just opens the ad. Is small, but distracting. Better than the old ones that redirected I guess.

Bah you want a challenging MMO? try everquest when it was first released and it took 3 days of killing wolf pups and ice spiders to get from level 10 to 12…unless you died and had to tack on 2 more hours.

Most downvoted comment in all of reddit history now concerning Lootboxes and trying to validate them in this new money gouge. https://www.reddit.com/r/StarWarsBattlefront/comments/7cff0b/seriously_i_paid_80_to_have_vader_locked/dppum98/