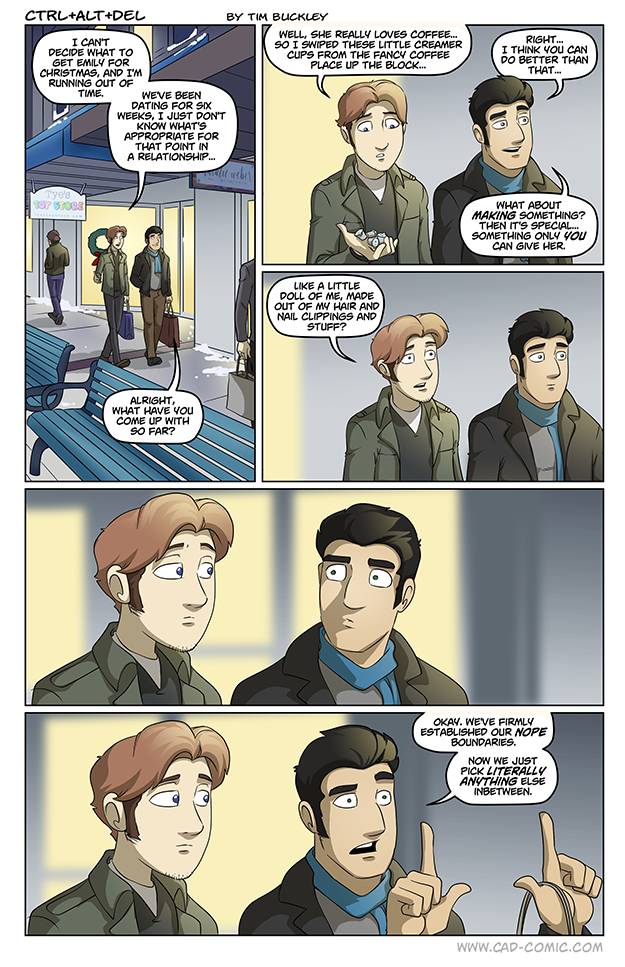 I think it shows the strength of their friendship that Lucas just rolls with it in a constructive manner.

At that point he’s just got used to it.

Lucas got some great expressions in this page. I love how Ethan can still surprise-shock him after all those years. xD

I also love how Ethan has that “What?” look on his face like what he just said was perfectly normal.

I love how much the art has evolved that we can talk about how great the expressions are.

FYI, it looks like the RSS feed sent out an incorrect link this morning: https://cad-comic.com/comic/the-spirit-of-giving-2/

Eh, it was correct at the time… I changed the title.

Penultimate panel just reads; “I share my living space, profession, and superhero identity with this man; Why do I do that again?”

Can someone direct me to the first issue of the new Ethan and Lucas arcs ?

I’m dying on that 2nd to last panel. I haven’t laughed that hard at a comic in a while. Lucas’ “What’s wrong with you” face is on point.

Ethan is the David Cage of Christmas gifts. The idea is there, and it’s usually a good idea, and even occasionally a well-planned one, but there’s always something that doesn’t quite work with it.

At least we know, if he’s anything like old Ethan, he’ll absolutely nail Valentine’s Day. Christmas he always either wrapped everyone’s gifts together or set the house on fire, so this is a step up.

The most absurd part of this for me is I was once almost gifted a sculpture made from a friend’s toenail clippings.

The timeline here is throwing me off. Ok, so I’m not so worried about games – they’re in an alternate universe, so maybe Sea of Thieves and Octopath and Fallout 76 came out six weeks apart. But we had a summer scene back in July – that blackout scene, which the lighting and outfits and everything suggested a hot summer day – and now everyone’s in coats, scarves, and there’s snow on the ground, and they’re discussing Christmas. The seasonal progression of time was giving me the impression that this relationship had been taking place from March to December, a… Read more »

I knew it. I was writing it, and a little voice in my head said “Don’t do it. Don’t put a number on it. If you do, someone is going to pick it apart.”