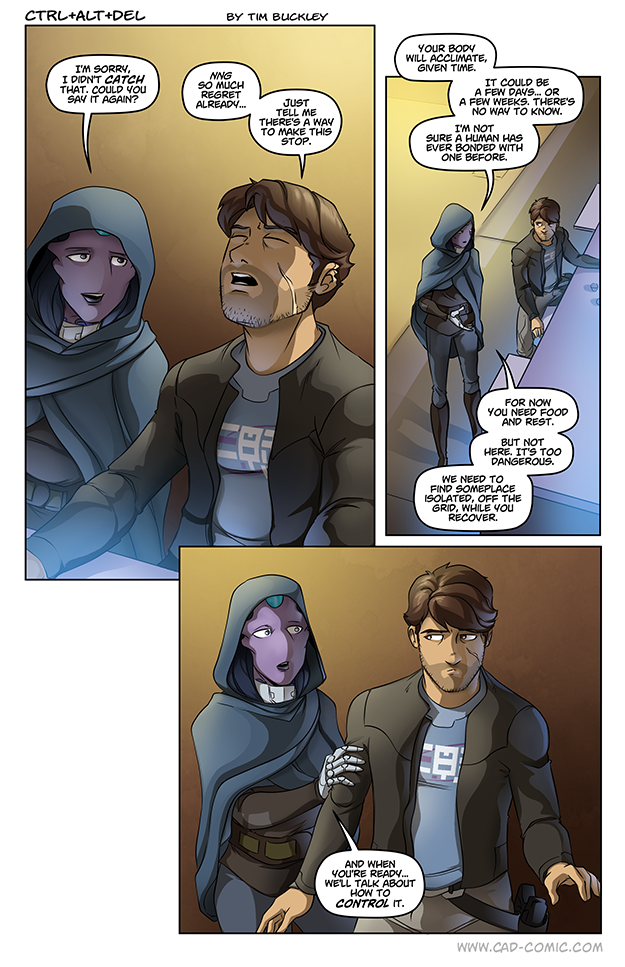 So she’s just another typical female xD Making it even harder for Ethan to ask for help….tsktstsk. Shame on you, Nyrah.

Cort. This is Cort’s tale. Ethan’s tale is along the Analog + D-Pad storyline

Right. That’s what I wanted to say xD

“another typical female”
Well someone isn’t afraid to look like a jerk on the internet I see.

Oh, salty Nyrah is salty! I love this path already!

Quick idea, guys – maybe….and this is just a thought, but….maybe, while Cort’s resting, you could get Nyrah a replacement arm? And an explanation for me of why she needed to get rid of the other, since I’m pretty sure it wasn’t organic in any aspect

I’d love to know that too! I spent quite a while the other day browsing the archive to find an explanation of this, but it looks like she just rips her arm out for no reason.

Her arm was shot and dangling limp by a thread. She had to get her backpack off to get to the Starcaster to save Cort before he bled out, and the arm was in the way.

Thanks, Tim. I’d been trying to figure that out for a while and the only explanation I could come up with was her forearm was still organic and she didn’t want to risk any accidental bondage.

I have a feeling that Nyrah’s not going to get a new arm any time soon. She’s looking for isolated, off the grid. Even if she wasn’t completely conspicuous as a member of a species thought dead for 100 years and a cyborg to boot, they’d have to park themselves somewhere semi-frequented to get that arm. And there’s no way that Nyrah would put something of her own comfort and convenience over the safety of the Starcaster, at least not until Cort’s trained enough to use it.

New age Amazon? Prime Member and get your new arm in two days?

Well, at least she’s a consistent pain in the ass, but this could be the moment. This is where the war against the Drangalex turned. And it wasn’t the fleet, it wasn’t some fancy new weapon. It was an ex-Marshall named Cort who pummeled them into the badass crater of baddassitude.

Can’t be that simple. He hasn’t even gotten accustomed to the Starcaster yet. At some point, after he’s had the time to adjust and recover, he needs a little conflict. A chance to hand the Starcaster off, or to choose to keep it and defend it.

That was a reference to the ending of Starship Troopers

Nyrah’s reply in Panel 1 is golden. I don’t think her gentle teasing is really making it very hard on Cort – I think they’re kind of showing that they’re getting closer, at least on a friendship level. Nyrah reminds me of an older adult sister ribbing her younger brother.

Besides, she’s immediately giving him information, coming up with a plan, and will eventually be going full-on Yoda here. Cort’s in a crazy situation where he doesn’t know where to go and what to do. That’s got to be a relief to him.

I don’t know, it seems odd to me, she’s been nothing but earnest so far, to see her teasing like this is rather jolting, it also makes her character more stereotypical to this kind of space opera genre. I think I’d rather she stayed as she was to act as a point of conflict rather than a mirror. I suppose I can deal with the change in direction a little though as long as the trope doesn’t carry on to shipping levels.

Not really. Well admittedly it is rare, we have seen this before. The first was in issue four when they were doing that job and she was on the docks saying that they could call her knowing he was following her superior training on her part instead of ineptitude on his. There was also the moment in the temple when she noted that any useful objects would have been removed long ago and Cort responded with, “Yeah? Did they take the exits too, because those would be useful about now”, eliciting a brief smile from her. I think it’s therefore… Read more »

This was almost exactly what I was about to say, though I forgot the bit about the exits. Yeah – Nyrah’s been hurt a ton (psychologically, through torture, etc) and doesn’t give trust easy. She doesn’t feel comfortable with people easily, either. But I think that little by little, she’s letting her guard down here and there and allowing herself to act more natural. For all we know, she and her brother used to act just like this. So yeah, this might seem a tad out of character, but this page is literally character development. Cort’s putting a lot of… Read more »

*10 weeks later* “Okay Cort, I found a desolate desert planet. Apparently this was all swamp and marshland a few hundreds years ago but then it got super developed and the resulting shift in temperature humidity and nutrient levels turned almost the entire planet into dry wastelands devoid of life. As such no one would ever want to go here on account of it being a hellish chunk of brittle rock that could be destroyed if put under a few hours of solid artillery fire” “…” “Also the sun is about to go nova so it should be easier to… Read more »

Eldest Gruff
Reply to  Him.

Learning to use the Starcaster in a system where the sun’s about to explode is not the ideal location for learning how to use a Starcaster. It’s just a tad bit too easy to wind up with your constituent atoms dissolving in that scenario.

Concievably while a star nearing nova would only be able to sustain the power of the Starcaster for a relatively short period of time (assuming the power it drains is derived from the closest “compatible” star or something) the star would also be generating higher levels of energy, meaning that the last few hours or days or even weeks of the Starcaster using that star’s powers might be extra powerful. That said, 1 a showdown between multiple starcasters in that location would result in that star going boom quickly 2 while it may be stronger, the expanding star may also… Read more »

Do we actually know that is how it works? I mean all I remember is them not wanting to use it on an aging star because it would push the star to die, I dont think there’s ever been anything said about the star itself effecting the caster’s power.

Brent
Reply to  Him.

Now I haven’t studied physics of any type, but wouldn’t training with a weapon that draws its power from the star in a system whose star is about to go nova limit training time to a few hours before you need to find another system?

A good point, which is why we must embark on a journey to find a star that is about to go SUPERNOVA!
…bad plan?

Depends. Earth is about eight light-minutes away from the Sun, so with a similar planet I’d imagine that would limit training time to about seven minutes.

What, so everyone rants about stars (should have been star not sun sorry (?)) but no one gets the Dagobah reference?
C’mon people, try a bit harder ; )
Nah its fine

I actually thought you were going for an Earth reference

Time to head out to a small, unregarded yellow sun, far out in the uncharted backwaters of the unfashionable end of the western spiral arm of the galaxy.

gaaaaaaaaahhhhhhhhhhhhh this is getting so interesting

Hi I was wondering if CAD had the animated videos here on this site?

Is there a list somewhere of all the choices we’ve had? Can only find some of them through Google, usually the more recent issues.

No, the Aug created life, using some of their own DNA as a foundation.

The Aug also used their Starcasters to shape planets, alter terrain and climate to make them more hospitable for burgeoning life.

The Aug did not leave the Starcasters “so that their creations could use them.” They merely left some Starcasters when they disappeared from the known universe.

That these species have Aug DNA allows them to use the devices they’ve found.

Not sure if you can answer this or not, but just curious- the dominant species of this space opera all seem to share several common traits – bipedal, vertical symmetry, eyes, mouth, ears, arms all roughly in the same location, etc. Are these inherited traits from their Augish DNA? And would that mean that alien species who do not share those traits (like the worm-hive Ssissimias) are not Augish, but either from another part of the galaxy or having independently developed?

He answered that last page that there are Aug-species and native species that developed on their own. And there were some other species besides the Aug but sadly he didn’t answer my question if any of those ancients have left behind creations as well or are still alive as well.

I get the feeling g the answer to that question is a single word — “Patience.”

What about “Magic” or “Science”

Eldest- Yes, those are traits common (but not exclusive to) Aug-descended species. An “in our own image” sort of a thing (the Aug are, in fact, worshipped as gods amongst certain Augish species).

With that said, the Aug did not engineer EVERY planet, nor every species on the planets they did visit. There are intelligent races that evolved independently.

James- In regards to the origins of species, who the Aug really were, where they went, and what other species might have lived at the time of the Aug, well… that’s all story for much further down the road 😉

now im getting Ben 10 vibes, like the old show with the kid and the thing that turned him into aliens