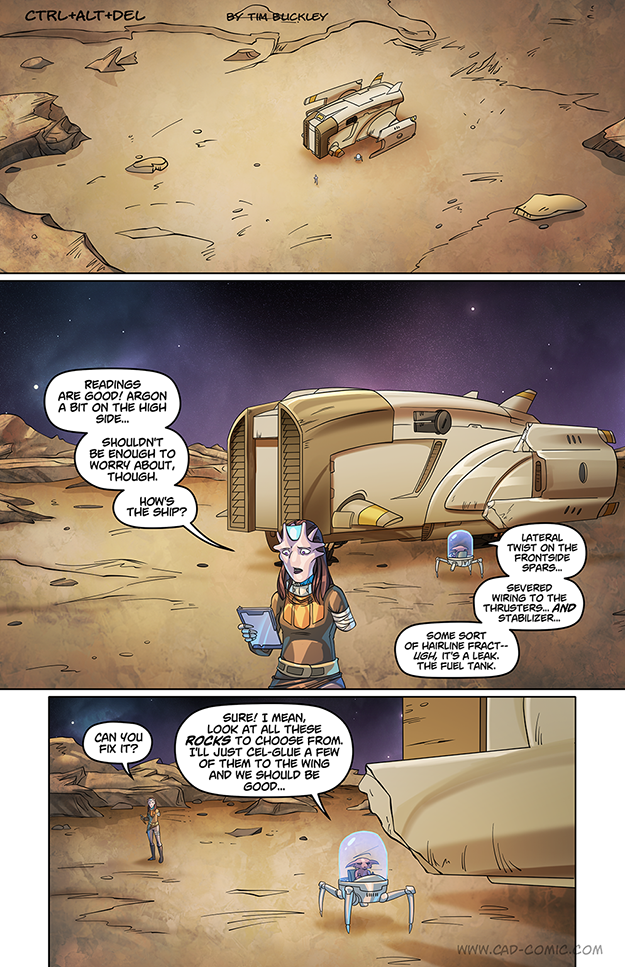 Nobody
Reply to  foducool

That is assuming they have a survival kit or refinery/assembler to process the rocks on board.

Without those your kind of screwed. The only way to build is to scavenge other ships for parts, until you can make the processing machines.

But that planet sure has a lot of sarcasm available!!!!

Is this the part where Nyra arranges some random stones in an specific pattern and suddenly a whole black ops hidden cache reveals itself, with food and provisions and battle armor?

Hmm doubt he can weld with his muck, would be great if they can fabricate stuff with that star caster.

Maybe it’s like Star Wars, he has to master the F̶o̶r̶c̶e̶ Starcaster with help from a small large-eared alien in order to l̶i̶f̶t̶ repair the ship and move on his quest to destroy the evil empire

Should be able to do exactly that (weld with muck) especially for a hairline fracture as they’ve already sold muck to mechanics because apparently it has all sorts of uses. Not to mention it should be stable around fuel as it’s not heat based. The question likely becomes having tools for precise application, but seeing as they have a source on-board, I would argue that not having some of the tools to make controlled application possible is a severe oversight.

I have no idea what I’m talking about(in the real world, much less in a sci-fi one), and with that said: I thought ‘welding’ meant putting molten metal between two other metal things, so that it fuses with them when it cools and solidifies, but I’m unsure. If that’s how it works, acid wouldn’t really work, right? You could melt stuff, but wouldn’t have anyway to ‘unmelt’ it. Maybe that’s not true, though. Maybe something like welding could work if he diluted his acid a bunch, and he could turn it and (some non-essential part of the ship) into some… Read more »

Let me introduce you to “Solvent Welding”, where you dissolve the material in a solvent, then let the solvent evaporate, leaving a freshly solidified weld puddle.
It’s mainly used for plastics, but if you have something that reversibly dissolves metals, it could work.

How exactly do you weld with a corrosive substance if it doesn’t generate heat?

Chemical reactions can be extremely exothermic.

The first thought that comes to mind in these situations is use internal paneling. Almost every starship I’ve seen has paneling covering the internal parts of the ship. I realize the internal paneling likely doesn’t have the same protections the outer paneling will have but I don’t believe I have ever heard this addressed in a story before.

Havok
Reply to  Anon A Mouse

that’s a good idea……And maybe something an engineer considered when designing a spacecraft…….it would be a pretty good design concept…..thou there maybe weight considerations to take in to effect……I mean in order for the internal paneling to have the same protections the outer paneling it may increase the weight of the space craft to unfeasible weights but we don’t have an understanding of how physics works in the starcaster chronicles to say either way

You’ll use ripple shields: A sandwich of layers where the outer layer will not stop micrometeroids but they will burst into nanometeroids (i made up that word); the next layer can stop a distributed bunch of nanometeroids.
Since the layers are thin and since the space between the layers weights nothing, that might actually be not that bad, assuming you’d be able to give up sone rooms within the ship. Also if you do have rooms to give up, you don’t care that much about weight..

Jetroid
Reply to  Anon A Mouse

I’m almost certain that they’d be different and incompatible materials. Like trying to repair your hood with your dash.

It doesn’t have to be perfect. It just has to keep the fuel from leaking out long enough to get to a place that has fuel and repair services.

It also has to form a protective seal from the vacuum of space and a heat shield against the friction of leaving and entering atmosphere.

Next time, let’s go to “The Planet of Fuel and High-grade Plastics”

Was that a Six Days, Seven Nights reference there?

Has everyone forgotten that a Starcaster is a tool of creation, and not an arm cannon?

Looks to me like Nyrah chose a great place to hole up and help Cort figure put his new Jedi powers.

Also / related: A lifeless planet / moon cannot have breathable air, the oxygen would be gone after 300 years. Argon-40 is the product of radioactive decay of potassium-40.

“Reading are good”
Shouldn’t you have checked the readings before stepping outside?

Learn your ‘caster to avert disaster. But for now, ship plaster.