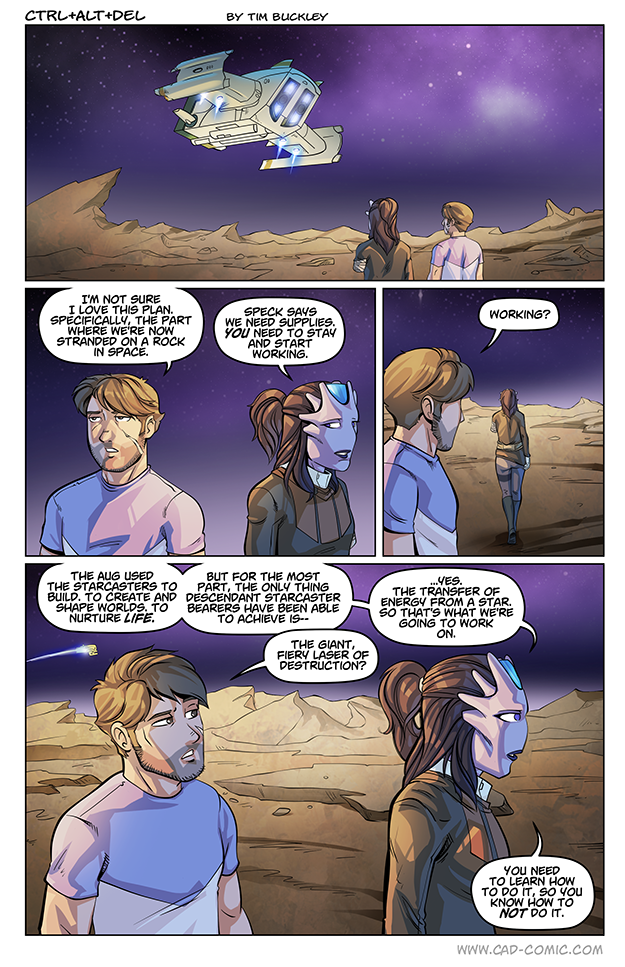 So essentially it is possible just to create food and water right here, but no one was able to actually control Starcaster that good

I mean, there is an easy way to create supplies out of nothing, all you need is one person with a Starcaster and one without. The algorithm’s simple: point Starcaster at person -> ask politely for supplies.
#NotLegalAdvice

Technically that’s just creating supplies out of another person who already has supplies.

I’ve tried to breath underwater a bunch of times, and I was never able to “create oxygen”.

As a matter of cosmic history, it has always been easier to destroy than to create.

Not anymore; now we can do both at the same time! According to myth, the Earth was created in six days. Now, watch out! Here comes Genesis! We’ll do it for you in six minutes!

I understood that reference

Wait, because I think we will see one do it before this arch end XD

If that was possible, her brother wouldn’t have starved to death though.

could be that her brother decided to not to try because he was afraid of being discovered.
keep in mind that this guy decided to allow his planet to be wiped out without a fight.
sure him fighting the enemy coulda resulted in the destruction of their solar system yet he woulda had a chance at defeating a race of genocidal monsters hellbent on wiping out all other sentient races in the galaxy.

Feel like you’re overestimating the practicality of the starcaster as a weapon. It’s incredibly powerful, sure, but space is big and we could, with current earth tech, already bombard mars with nukes from a thousand directions if we wanted. Aiming your death laser that’s strapped to your arm is nontrivial. It’s a great asset, but needs to be just one part of a military response or it will quickly convert to the enemies asset. You’ll note that federation isn’t expecting to have a good time against an any that has half as many starcasters as they do.

They opted to try to get as many of their own people out alive as they could, and get their Starcaster bearer to join the Federation’s ranks. The Dranglaex could have largely escaped a sun going supernova just by blasting out at light speed, but they, still in atmosphere and largely not on their ships, couldn’t have. Also, it’s likely they didn’t expect to be completely wiped out, but rather to be conquered and subjugated. The choices didn’t look to them like “let 99% of the population die to try to save 1%” or “sacrifice everyone but take our attackers… Read more »

I’m pretty sure he’s going to start by creating a ball so they can have a catch. And then, once he learns he can do anything he wants, he’s gonna make some weird shit.

So it is basically a Garden of Life Creation Kit (G.E.C.K.) but more portable and can be used infinitely.

Except without the instruction manual it is now an infinitely resupplying suitcase nuke that will swiftly kill the star your planet is revolving around if you use it too much.

Admittedly, if the civilizations here are ANYTHING like ours, I doubt the inclusion of a manual into the package would make things any better. I mean, the thing shoots pretty lasers – would anyone even bother trying to do anything else with it?

I dont recall hearing anything about it killing the star, just takeing the energy of it. There is an ungodly amount of energy in a star. If the whole output of our sun was focused on the earth it would take a week or so to completely vaporize the whole thing (only hours if you just wanted to slag the surface and render it lifeless). It will be puting out that much energy for a few billion years. Considering most starcaster weilders use it as a “fuck everything in that general direction” yamato cannon they could probably destroy millions of… Read more »

It stated that it drains the energy from the star and hastens its life cycle. While normal planet shaping usage wouldn’t be too bad, prolonged drainage from a old sun could trigger a supernova.
mentioned here https://cad-comic.com/comic/the-starcaster-chronicles-02-08/
also probably wouldn’t be particularly safe to be in a system with 2 or more starcasters fighting

I noticed my mistake. Unfortunately, I cannot edit to fix the error.

Haha that’s how you train a dog not to bark. She’s taking simple approaches.

Was Vectanix from the Dranglaex also wearing a Starcaster or was it just space jewelry?