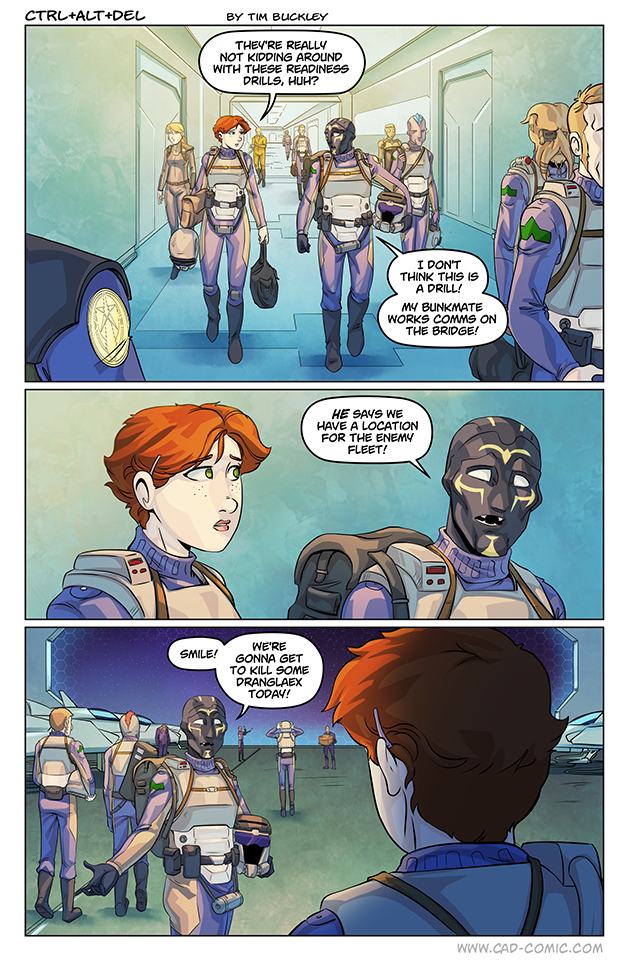 Get in loser, we’re going killin’!

I hope most of the survive…

Well it was nice knowing you, unnamed side character guy.

This guy reminded me of “Starship Troopers” movie (perhaps because I just watched it a few days ago).

Early on, the infantry soldiers were all “We’re going to kick their asses, huzzah!”.

Then they attempted to land (not even landed, attempted) on a hostile world and all sorts of hell broke loose (like heavy casualties before they even reached the surface, and down there it was even worse).

That movie could well have a title “War Is Hell: The Movie”.

What do you expect from a movie directed by an avowed pacifist?

I mean, the original book was also a satire of fascist militarism. It would have been weirder if the movie had been directed by somebody who thought wars were cool.

The original book was actually 100% serious, sadly. It has been adapted many, many times, and any given adaptation has like a 50/50 chance to either play it serious or be a parody.

I don’t think the book was satirical at all. It lionizes militarism, and heaps praise upon the military underclass, the grunt.

But I don’t think any part of it isn’t sincere about the political philosophy of “sometime the only solution is violence, and this is how we’ve found the best way to organize violence.”

I mean, the whole point of the movie was satirizing the unchecked militarism/fascism of the novel…

So… how do you pronounce “Dranglaex” anyway? Is there a canon answer, or is it one of those “it’s a mythological creature I’ll pronounce it how I want to” situations.

I’m sure there is a correct way, but since I don’t know it I pronounce it Drain-Lax.

I prefer “drain-glay-ex”, hopefully Tim will settle this.

That’s how I say it in my head.

Thank you for clarifying, Tim! I’ve been saying “Dran Glay Ex” all this time 😛

I’ve been pronouncing it as the “dr-grumble-grumble-baddies” I am glad that I wasn’t too far off.

or just dran-gla-ex; when your mother language is not german based, its easy to pronounces

It’s either pronounced “drang-leaks“, or “drang-lair-ks” assuming the spelling makes sense. “ae” Gives you a long “ee” sound, as in “anaemic”, or the “air” in “aerial”.

I always thought it was pronounced like leaks. Thanks for clearing that up, Tim!

I read it too fast in the first issue and always do a double take because between issues my head keeps reverting back to pronouncing it to the mis-spelling I keep misremembering: “DRANG-a-lex.”

“Right now, I feel like I could take on the whole Empire myself!”