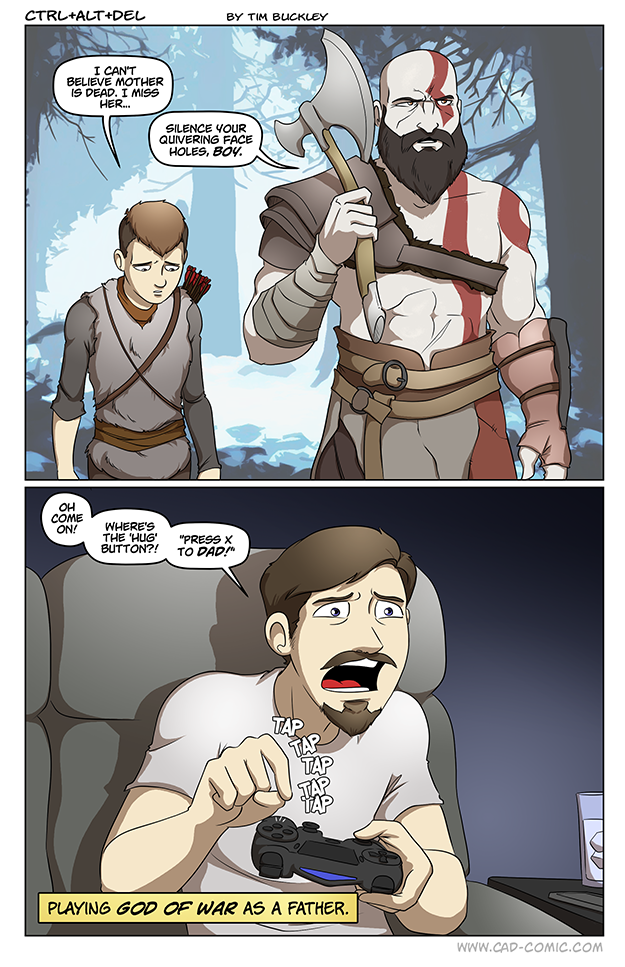 I am savoring the shit out of God of War. This is one of those games you remember for years and years after the fact. So many incredible moments. Sindri is my new obsession.

However, I don’t know if its just me, but as the father to two little boys, it is hard to watch Kratos give his kid the cold shoulder at the start of the game. The boy’s mother just died (you literally spend your first moments in the game constructing a funeral pyre for her), and Kratos (as I guess you’d imagine), expresses all the compassion of a giant, concrete sculpture of a middle finger.

On a couple of occassions, he even almost reaches out to comfort the boy, and rather than giving you, the player, the option, he retracts his unnoticed gesture.

Now, a caveat here, as spoiler-free as I can make it: as you continue to play the game and learn more and more about Kratos and Atreus’ distant relationship, the game does… things to show you something deeper. Kratos doesn’t become warm and fuzzy, but the game illustrates his love for the boy in very nuanced and powerful unspoken ways. I know that particular father-son dynamic doesn’t sound like anything that hasn’t been done before, but it’s executed really well in this game. It’s something that’s going to stick with me.

That’s all I’m going to say about that because, again, I don’t want to get into spoilery territory. But as difficult as it is to watch Kratos deny his son some basics like praise and compassion (and honestly, the tough love approach does make sense in the world they’re living in, and given Kratos’ background), you do at least get to see something below the surface.

On a different note, I think my four-year-old is starting to wonder why I’ve begun addressing him as “boy.”

I dont typically watch Jacksepticeye or Markiplier anymore (I prefer long running series, not short one-offs) However, Jack started playing God of War and it is amazing. I totally feel that “Oh come on, one hug wont kill you!” mentality.

Although I think God of War one of the best games ever, especially the 3rd part was not entirly easy for me to watch (my colleague played, I was just watching, enjoyed it very much) because of similiar moments….I mean, GoW 1 and 2 were gory….but GoW 3 was just over the top in some regards….

So I really can imagine how it is to play Kratos with such a tough father-son dynamic. I think I have to watch a Let’s play at least….

but being a compassionate dad wouldnt be toxic, and any kind of masculinity that isnt toxic is fake news. how do you go to conventions and not know that?

I’m hoping this is a joke.

“Toxic masculinity” does not mean that all male behaviour is toxic, but rather that some traditional expectations visavis male behaviour are toxic. The world abounds with positive male role models, from Mr Rogers to Steve Rogers. Unfortunately, it also abounds with sexual predators, from celebrities, to senior politicians of any and all affiliation, to college students and professors. It also abounds with mass killers, from the oklahoma city bomber to the 9/11 terrorists to the Norway shooter, the Vegas shooter and the Toronto truck driver. These are toxic, and predominately male, behaviours, are they not?

Those are not predominantly male behaviors. Anyone regardless of gender is capable of either great good or great evil. Neither sex is more predisposed than the other.

I already call my son Boy, and referred to him as “The Kid” all the time. (ie To my wife: “Where’s the kid?” or to my coworkers: “I’m taking The Kid to karate.”)

Show me “Sand the floor.”

I think the new rule of law is anyone under the age of sixteen can only be addressed as boy.

“BOY.
YOU THERE. BOY
QUIT ALL THIS SCURRYING AROUND BOY.”

luminantAegis
Reply to  Cue the lights

My good sir, have you run out of shaving cream so soon?
I told you not to eat it

Side note what are the commands for italics, bold, etc

I have 4… 3 boys and a girl. And a dog. When I holler down the hall for one, I usually call all the other names first, and the dog’s name… Then I fall back to “you. kid. Thing [#]”. It’s gotten to the point that if one of my sons is picking on another, someone will say to me “Thing 1 is being bad!”

Names are for the weak! …said as I am required to type my name for this comment (^.^)

My grandparents frequently go through the family tree before finding the right name. My dad has started mixing mine and the dogs name, too lol

I absolutely love this dynamic. The desire for Kratos to be Mike Brady while knowing that the world they live in and Atreus’ lineage stops any of that kindness from being useful…It’s heartwrenching. I love it. Kudos to Sony for playing this genuinely horrible dynamic so well.

I love your comics detailing how your perspective as a gamer has changed as you became a parent ( or have you always shown that perspective and I just failed to notice? ). Every time I see it I feel warm and fuzzy.

Were you a dad before starting the comic strip? If not, are there any old favorites you feel like revisiting and giving a new look from a dad’s point of view?

Noooo, I’ve been doing this strip for 16 years. I’ve been a parent for four. 🙂

Actually, Tim, that brings up another question – apart from the superhero thing, do you find yourself writing Lucas and Ethan (or even Cort and Speck and Nyrah, not sure where they fall on your timeline) any differently now that you’re a parent as opposed to how you wrote them when you weren’t a parent?

Hey there Tim, seems like your new video advertising in the bottom right corner has issues with autoplaying, just blasted me with sound despite the little tick on it saying that it was muted.

It’s a new code from Google, and there seems to be a weird bug we’re trying to track down. If it happens again, can you note the advertisement and exact time?

I just saw a Deichmann advert around 5 minutes ago, at around 9:40am (British Summer Time).

Because I realise I wasn’t clear, the Deichmann advert autoplayed with sound.

As someone who had a dad who served in WW2 I can tell you that seems very familiar. It sounds like Kratos is a 1950’s kind of dad who is trying to teach you to be a man no matter how much it hurts him to do so. I have two boys and it has been that kind of battle, though I give a lot more hugs, to teaching them to be men, and showing them the love I feel for them. To quote my favorite MTG card “Experience is a good teacher, not a kind one.” I try to… Read more »

These comics about being a dad but ALSO being a gamer are just as insufferable as mothers who constantly share images and posts on Facebook reminding you that they’re mothers.

“Only moms will get this image!”
“Look at this picture of a kid, doesn’t it make your mom senses tingle!”
“Nobody knows just how being a mom is the single most important thing in the world!”

We get it dude, you’re a dad, you don’t have to keep reminding us every few weeks or so.

Please only use topics that apply to every single demographic from now on, Tim.

I guess that means no video games that everyone hasn’t played, or consol Wars.. or Super Heroes .. or ..anything. =U

From here on out I shall run a poll with four hundred choices of topics, to be voted upon in waves over the course of weeks as we slowly narrow down subject matter that will be palatable and relatable to all.

In other news, my new update schedule is now one comic per year.

Shush, don’t give Tim any ideas.

Alternatively we could just ignore the trolls.

Dude, I laughed my ass off when I read today’s comic!

But you know one of the greatest things about this comic and the plethora of other media out there? – If you don’t like it you can piss off and go read something else.

You’re not alone, Though in my case, it would be “press x to uncle”

Applying 21st-century relationship dynamics to 1st-century characters. This seems to be a problem with many media formats nowadays. I get that we are trying to relate to these characters in a manner that we are more familiar with, but I just think that it is also cool to have them be how they would be in the time frame they are set in.

I dunno, Norse Mythology seemed pretty big on family, even if it wasn’t the “blood is thicker than water” kind

Goddamn Freya went and shook down almost everything in the world to get it to promise not to hurt Baldr to try to prevent his dead.

God of War was one of my favorite all-time series to play with PlayStation. It helps and it’s all wrapped in Greek mythology. Which is one of my favorite mythos. Plus, the gameplay was unique, the scenes and movement and backgrounds beautifully rendered in, and even the story and plot line was intriguing. I really miss it.

So it’s like the complete and polar opposite of Asura?