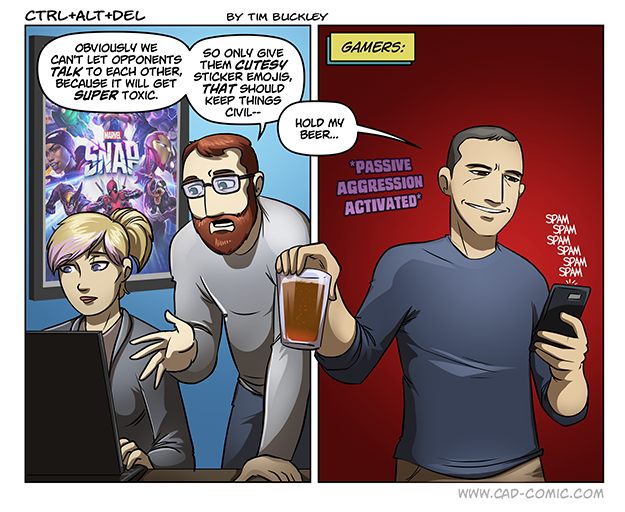 I’ve been playing Marvel Snap lately, which is a sort of Hearthstone-ish card-battler, but the matches are a lot faster (which is great) and there’s no buying card packs hoping for good cards (which is also great).

Similar to Hearthstone, even though you battle other people, you can’t actually communicate with them outside of some pre-canned emojis and sentences. Of course, where there’s a will, there’s a way, and some gamers will weaponize whatever is available.

Stripped of all but the most benign communication tools, they still manage to make them feel they radiate with trollish aggression. It’s a little impressive, actually, like finding a way to make smoke signals seem petulant and mocking.

I had one fun interaction with a player where we played the same card at the same time, and then both did the Spider-man point meme at each other, which was awesome. But when I run into a player that immediately snaps turn one, and then starts spamming the grinning Thanos sticker, I’m thankful that mute button is so conveniently placed.

First thing I do when playing hearthstone: muting the opponent. About this game, I am unable to find any fun in it, I got bored very fast, but to each his own I guess 🙂

Ah, I always Snap first turn. Its rarely worth waiting to see if the snap will happen, and losing 2 to a retreat isn’t that bad.

I mean, in Dota2 there’s the option to ‘Tip’ a player and give him these points that can be used for cosmetics. It was introduced as a way to show gratitude, but… It’s only every used on players after they make a shitty play as a way to tilt them. At this point it’s basically an insult to be given a tip (and you can get tips from both teams, yours and enemy). You can mute people all you want, but you can’t turn tipping off. It’s maginificent.There truly is a way as long as there is a will. =D

no thanks nintendo
Reply to  Derptastic

Sounds like Steam Awards, except I’m certain Valve designed those to be toxic on purpose. There’s surely no way they didn’t know that creating a “clown” award would be used to harass other users. And you can’t turn them off, either.

Plus Steam user reviews and the Steam forum are already so toxic. Seems Valve is leaning into it rather than doing anything to clean it up.

raven0ak
Reply to  no thanks nintendo

well, thankfully valve is private owned company; and they really understand what it would mean to start fighting against windmills … mean where there is will there is way and company behind would be only one truly burned for it (long as valve keeps things bit civil that no malware or personal information are shared in forums, alls good ; and if you take offence from just words just quit or grow thicker skin, mute things from your end)

are you a bot , or just struggling with English as well as common sense

I’ve found one of the best ways of dealing with trolls, whether it’s ingame or on e.g. some forums or such, is to just agree with anything they say or thank them. Don’t say anything extra, don’t argue with them, don’t explain yourself — just go “Ok, I agree”, “You’re right”, “Thanks!” or similar and watch them begin to over-exert themselves trying to get you to blow your gasket. Many of them will sooner or later completely melt down in various hilarious ways. Now, I don’t know what options you have in games like this, since I don’t play these… Read more »

Most of them exist in a state that is already halfway into total “triggered meltdown mode,” anyway. Their entire expression skill set is subsumed into ways to immaturely project their personal frustrations, coupled with hilarious amounts of painfully transparent overcompensation. So, poking them into a full blown rage is so easy, it’s boring most of the time. I mean, they’re so predictable. They’ll end up there, whatever you say or do. But yes, reacting like you said will probably make it sting some more. Yep, I can be a pretty condescending and arrogant bastard. But a rational and mature one,… Read more »

Another good way to deal with trolls is to point out that they’re trolls and the only reason they’re trolls is because their life is empty and meaningless. Don’t deviate from that message no matter how much they insult you. They really don’t like it.

The Legacy
Reply to  WereCatf

Alternatively, just outwit such comments. One time while playing a game, someone made the comment that I made their package soft. I simply replied with; “That’s unfortunate,” followed by “You know there’s a medication for that?” Guy ended up making a remark about my mother. Shame that I didn’t think I told just after the match that I could have replied to *that* saying “So you’re a necrophiliac? Because she’s dead.” 😅 I find that if you can deadpan a response without showing offense or hurt, that can be the strongest defense against the troll because they can shut them… Read more »

That or just ignore them completely. It pisses them off to not get a reaction.

Gamers will always find a way. It’s always best to give the necessary communication tools needed for the non-toxic gamers to play properly, and include a mute button that silences those toxic ones. That way they won’t find more elaborate ways to be toxic, and people playing the game get to have a fun time. It’s a win-win situation.

Heck, you could even make it muted by default if you really wanted to dissuade people from using it.

I figured someone would know it, I just didn’t check in after I posted yesterday. I guess you could say I roped.

And then they take their sweet time for their own turns and you just play normal…I then like to wait until the last moment the counter starts wearing off. If I beat their cheesy tactics thats a bonus, replying with “Oops” and kisses. 😉 You can literally smell the rage over the Internet.

while it sounded good at first… i dont like the attributed author who seems to be quoted.
So, it seems even i can agree with words spoken from someone i dont agree with generally.

This is the reason why the “Sorry” emote in Hearthstone was replaced. Barely anyone used it in a sincere way.

Oh shit, I remember that being one of the ones! They removed it? I had no idea, I haven’t played Hearthstone in ages. Hilarious XD

I think these days the standard troll stuff in Hearthstone is to use “wow” as “man, you screwed up, look how stupid you are” and “Hello” late in game as a denigrating “I don’t care enough about you to greet you at the start, look how much I think you’re dumb”

I played and even hosted a server for World of Warcraft for a time I got fed up with both the insane amount of coding involved with all the updates and the “trolls” or the other stuff people would do to ruin honest players’ gaming. So I switched the server to “rpg mode” no pvp and half of the players on my server complained and left, no skin off my nose but some players still found a way to mess with others. Even with a mod to mute spammers it didn’t stop.

It’s a crazy addictive game though. The length of the matches is just enough to make me think ‘one more game…’.

Best interaction I had was when we both got random cards played and simultaneously tapped the Deadpool emote at each other.

Yup. I loathe how people go to great lengths to turn restricted communications into insults. This is also a lesson to game devs: you will not stop people from being jerks. They will find a way. The only way is to 100% prevent communication. No signals. No emojis. Nothing.

No communication. No interaction. Each player is placed into their own walled sandbox where they cannot interact with any other humans.

I shall call this invention “single player”.

Trolls are among the lowest forms of humanity. That is all.

Is that supposed to be Ben Brode? where’s the flannel.

Hearthstone even had to swap out the “Sorry” emote with “That’s amazing!” because players were using it in the most sarcastic way possible. Like others have said, muting my opponent is my first action in any Hearthstone game. My opponent can emote into the void to their heart’s content.

Man Mtg Arena has only 5 emotes, and players will find a way to hassle you. Toxicity doesn’t care about barriers.

The only thing that would be better than muting a player would be if they sent you an emote and it notified them that they were muted.

Oh that’d be great. And maybe a note, saying if they spent more time learning to actually play they might have a chance at winning a game.

Fortunately I haven’t ran into anything like that with Marvel Snap. I’ve sent a few Emojis but nothing really spam like.

Lol, isn’t that the truth.

Hahaha, that exact same turn 1 Spiderman point meme interaction happened to me too!! I suspect it was someone else I ran into, but it was definitely the highlight of my play time that night, agreed on that. One of the few positive emote-related experiences I’ve had across most games!

That’s why I stopped playing Clash Royale. Yes, it is sometimes impressive what the puerile can achieve in the face of such obstacles. And a shame they can’t direct their energy and intellect into something more constructive. In this situation mute is great, but a setting to mute all players would be better. Another option I’ve considered is a +/- response where if you don’t like what a player has sent you hit – and if you do you hit +. If a player is below a threshold configured in your settings, they can’t communicate with you. Might need to… Read more »

Like the 13 year old with a cracking voice shouting obscenities when he keeps getting killed in a shooter because he just isn’t very good yet and he’s angry about that fact. Last time I saw that, nobody even gave him a hard time for not being good. They just asked him to refrain from swearing on the voice channel. The mods didn’t even kick him, though they muted him finally after he wouldn’t calm down.

Anger and mean-spiritedness are a sad part of humanity, moreso when adults are all about that.