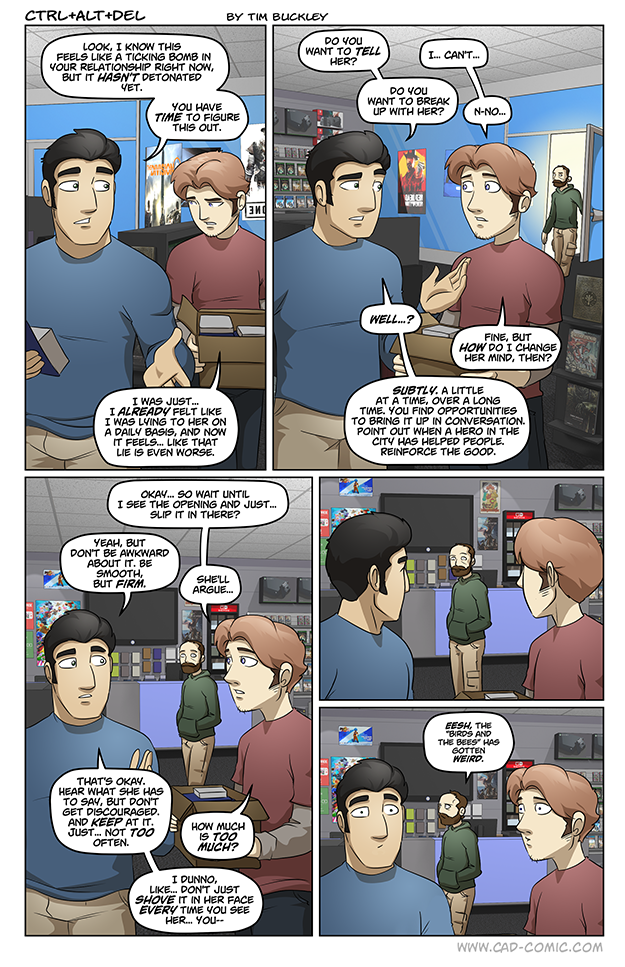 A Difference Of Opinion, p4

NOTE: Momentary hiccup with the layout while we update some stuff. Should be fixed soon.

I am loving The Division 2.

I may not get to fly around in a cool suit of armor inbetween fights, but there is so much content, so much fidelity and detail to the world, that it more than makes up for it. The enemies, so far, have just the right amount of bullet sponginess. Tougher enemies are clearly telegraphed by the amount of armor they’re wearing. In the first game, end game enemies would just absorb a few hundred rounds “just because.” Now, you actually see their armor breaking off as you damage them, giving a visual cue that you’re whittling them down that feels fantastic.

Loot drops are interesting and varied, and I’m constantly making cool choices because hey, maybe I haven’t gotten a new M4 in a while, but I got this other assult rifle that looks neat, so let’s try that out.

And the world… it’s been a long time since I’ve been to DC, but traversing the streets, fighting through the Air and Space museum, coming across the Air Force One crash site… inbetween fighting roaming packs of baddies, I am constantly ogling the environments they’ve created here. And not just because there’s so much to look at, but because there’s so much to find. Crates and chests and backpacks are numerous and contain valuable supplies and gear, and there are hidden chests, often stuck in trees or scaffolding, that contain dyes and cosmetics.

And while I miss the eerie, quiet snow of the first Division, the sequel feels so much more alive and volatile. There are friendly civilians roaming the streets that actually do stuff. They’ll fight enemies, reinforce you, go out and collect supplies. It makes it feel like I’m actually fighting to save a city, as opposed to just fighting to clear out the number of bad guys in it.

Thunderstorms are pretty damned cool, too.

All in all, The Division 2 feels like one of the most complete “games as service” titles I’ve played in a while. I’m not at endgame yet, but it feels like it launched fully prepared for level 30 and beyond. There’s so much content and it feels fantastic. There’s a couple of little things I don’t like… the UI menus are a bit dense, and balancing negative stats on mods with positive ones still feels weird. But overall, they learned so many valuable lessons from the first Division that this launch just feels fantastic and whole, and like something you could play for a good while.

Also thanks for your opinion on division 2, it sounds like they’ve made some advancements from their previous queueing simulator!

I’ve been hearing good things about The Division 2. Me? I’m a Destiny 2 man…I don’t know why, but I love it. Never got into The Division, though.

I get it, there’s definitely an appeal to having a strong sci-fi bent like Destiny or Anthem.

On the other hand, I really love the firefights in Division with real weapons and cover, etc. So many of them feel like that one street scene from Heat. 😀

I have doubts that Ethan “Master of Subtlety” McManus can really pull this off without either blowing his cover or causing a major fight. It’s not easy to change a person’s opinion, especially when it’s backed up by logic, like Emily’s is. Trying to change another person in a relationship, also, doesn’t usually go over well. Plus, if he really starts debating with her over this, she might start looking more closely at the Supers, and may well piece together on her own that her boyfriend and his best friend that own a video game store look suspiciously similar to… Read more »

If Tim uses the cases of “Super Hero logic”, she won’t get it by looking at them (and I think he is using this sort of logic, because nobody recognized them yet).
I mean, one of the most famous cases of this “logic” ist Sailor Moon (and most other magical girl anime, except “Phantom Thief Jeanne”), where everyone should know who they are, after non of them were wearing masks (exept Venus at the beginning). In each case they have to see them morphin to recognize them.

… and now, I can’t stop imagining Ethan and Lucas going through a Sailor Moon-style transformation cutscene.

Och, Ethan was once quite near the point to be Taxedo Mask (or the Pinguin) 😉
https://cad-comic.com/comic/fish-in-the-sea-p3/

This strip made me laugh so hard and reminded me so much of that one where Ethan wants to buy “Caulk” from a long time ago.

When I played for the beta weekends, it felt so much like it was a reskinned Division 1 (with a few minor tweaks, like mods having negatives), because everything else was pretty much the same. You have your central hub that you upgrade as you go about playing in the world and collect resources. The abilities are mostly the same, the types of missions and baddies are pretty much the same, etc. I’m not saying that’s a bad thing. The first Division was fun and the environment was interesting. Just…if I want to play The Division, I’ll go load up… Read more »

It’s a sequel, I don’t know why you’d expect it to reinvent its wheel. But it does accomplish what sequels should do: learns from past mistakes, provide more of what works, and innovate in a few key areas.

And there are a number of things that really change the feel of the game, that you can’t get from a few hours with the beta. The communities/settlements change the feeling of the way you progress through the game quite a bit in my opinion.

Yes you do want to break up with her, Ethan. Even if we didn’t know you had a thing for Lilah, that stutter on the “no” says it all.

The one thing i liked about the Div 2 beta (havent gotten Div 2 yet), in regards to the enemy armor, is that sustained fire on a single part can actually break the armor while they still have some armor elsewhere. Meaning that you can effectively kill an enemy that still has 2/3rds of their white bar left. Feels way more rewarding than the “Its totally not a shield that doesnt recharge” kind from Div 1. That and the way that certain enemies with armor have reduced armor in places based on their type. No “dude with 3 million health… Read more »

I was planning to try the Division 2, but I received the Escape From Tarkov beta key from a friend of mine. OMG. you should really see it, of course this is a PC and not an arcade, but tactic, using of cover and gun modding. everything is there..

I knew that sort of joke was going to happen, was laughing before the old guy spoke up

Have you played with any other players yet? The balancing between higher level players and lower level players feels very broken to me. I was playing with some friends who are are lower than myself through missions, activities, etc, and they are getting wrecked. I recognize everything is getting a stat/level boost because I’m the highest level player, but there is clearly something missing when I am effectively soloing events in between constantly reviving my teammates. I completely agree with your assessment though. This feels like a proper sequel and release. And oh man. Just wait until you finish the… Read more »

There is a bug where, if you group with friends of different levels, their damage and skills scale, but their armor or health don’t. So they can do the right damage, but they also get 2 shot. The devs are working on it.

It’s fine in matchmaking, though.

That’s good to know. I hadn’t looked up to see whether it was a bug or intended. Hope it gets patched soon.

I also love the subtle touches to the scenery. Like the hints of Christmas decor that hasn’t been removed.

Have you had a fire fight at night, in the rain, with fog? 😐 talk about stressful.

Or when you’re fighting indoors, but the sun is coming in through a hole in the roof and blinding you XD Yeah, definitely some memorable environments for some cool fights.

I played Div 1 for 2 weeks on release, went on holiday, then didnt get back into it until 2 years later when they had revamped. I went into Div 2 very hyped (I love the world and story-telling of the team over at Massive), have played since Friday and reached end-game last night. There’s been so much content for me to get my teeth into (I’m a 100% completionist/Collectible Goblin), and I feel that they have learned from their mistakes. I too love the way the armour works, I like the new additions to the skills and I feel… Read more »