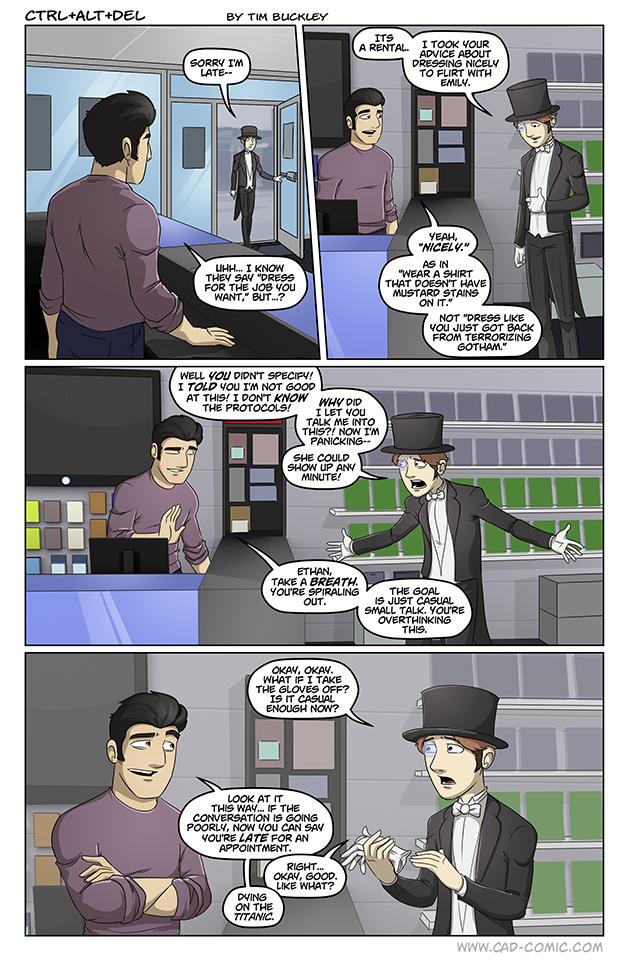 If Emily does not die of laughter seeing this, then she’s an angel in human disguise.

Nah…. she’s an angel AFTER dying of laughter and then coming back because she still likes Ethan for it.

He could claim his atire is themed for a new game or something.

Then he’ll know if she knows video games, important detail.

Inb4 Lilah shows up instead.

Maybe he can just say he’s on his way to a Dishonored-theme party? Or possibly Bioshock?

Ethan, would you kindly take off that ridiculous…never mind, put it back on.

The line about terrorizing Gotham got an abrupt chuckle out of me.

This was pretty much me in the dating world the past few years (before finally meeting someone, that is haha). It’s so hard to know what the actual protocol is! What clothes are acceptable? What places are good to go to? What can I and can’t I talk about? Haha.
I always thought maybe I was a calm and reserved Lucas, but maybe I’m closer to Ethan than I thought.

In this universe, when Lunas references Gotham and alludes to The Penguin… is he talking about a fictional location and character, or a real-life city and supervillain?

I think he meant because your own comic is itself a fictional story, and sepcifically one about superheroes and villains in perfect Marvel/DC-esque format in which it would not be insane to wonder if Batman coexists with Ethan in Lucas in a shared general world of superheroes. I mean, it would probably be illegal even if you wanted to do exactly that.

I figure you already got that much and were just making a snarky reply , but still.

You say that, but I still half-expect to see Deadpool as a background extra one day.

Probably staring dead on and flicking us all off, but still.

That’s because Deadpool is real. He’s actually one of IT’s children, but because of circumstances dealing with the Dark Tower and some Wrinkles in Time, he turned out to be not evil, just crazy, and being an entity outside time and space, spends his free time as a comic book character mostly.

Your confused claims are like Wind in the Door

Tim wouldn’t include Deadpool. That would require maximum effort.

So, I’m confused; these are clearly the Analog and D-Pad Universe Ethan & Co, but it’s labelled as generic CAD comics instead of appearing under the A&D-P list. There are another 48 A&D-P comics on the CAD list in addition to this one. By the same token, the previous and next buttons will only work within the particular grouping that you’re in as opposed to jumping between them when they’re posted the way the comics used to be before the original series ended. This means when you’re reading the archives from the beginning (which I just recently did) it skips… Read more »

I’m aware. I’ll likely re-classify them in the near future. The reason I started tagging Ethan and Lucas comics as CAD is because we were inbetween a cliffhanger issue of AnD. I didn’t want people reading issue 4,then those one shots, then issue 5 (which picks up right after #4) and wondering what was going on.

See, this is why I’m so glad I’m not single anymore. That would be me too, no clue how you are supposed to flirt.

As someone who is equally terrible at flirting. I can honestly, seriously, relate to Ethan here.