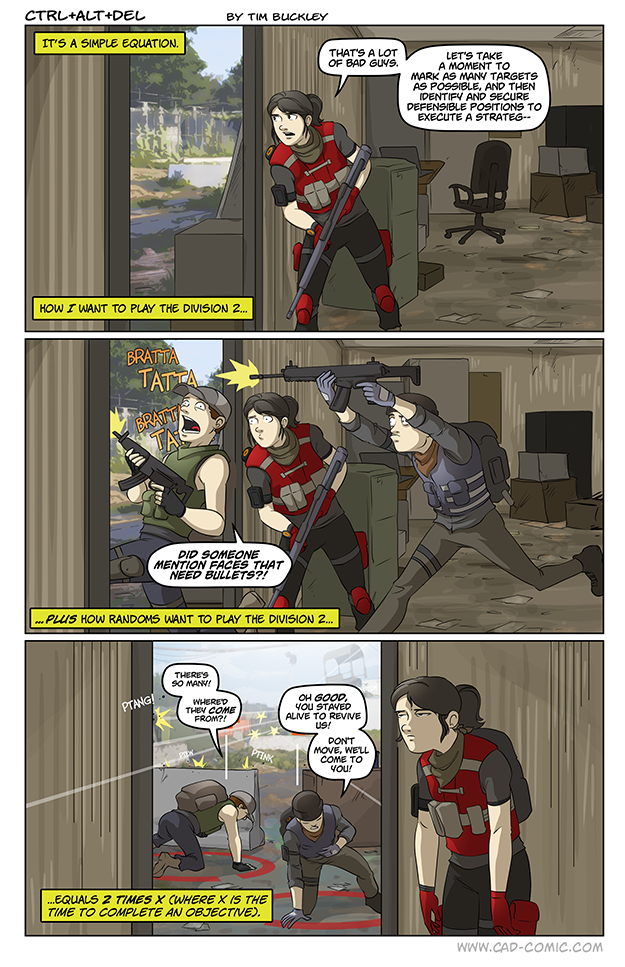 I’m not asking for much. A minute. Enough time for the whole squad to actually get to cover, identify targets, and start a coordinated assault. Apparently, that’s asking for the moon.

Joking aside, The Division 2 is a master class in launching a looter shooter in a complete and finished state. I have been consistently impressed with the number of layers they have continued to stack on as you journey through the game, adding systems, and activities, and things to collect, solve, farm, battle, etc, and then to change and evolve those systems further at end game.

Hopping into The Division, I can choose to go help fend off bad guys trying to take one of my outposts, try to find special hunter NPCs for their masks/ivory keys, go underground and farm faction keys for special chests, take on a bounty to hunt down a specific boss, head into the dark zone for some risk vs reward, play a little straight-up team-based PVP, run a stronghold with other agents, work on projects, and the list goes on.

And throughout it all, I constantly feel like I’m getting loot so that I can upgrade, or complete set bonuses, or try and get a better roll on an item, etc.

It’s just a really solid, well-planned, fleshed-out launch, and that feels fantastic. They’re opening up another World Tier next week for those that have already rushed through T1-4 (I’m only on 2), but it just feels like they have the runway they need to keep getting to those next updates without feeling like the health of the game hangs in the balance. After Anthem (or even because of it), it’s really nice to play a game that just feels like it launched… well not “finished”, because these sorts of games aren’t designed with that in mind. But ready. It launched ready, and it’s kind of a shame that that can be so rare these days that it feels like a breath of fresh air.

So yeah, I’m digging The Division 2. And Outward is fucking amazing too, more on that next week.

I was pleasantly surprised by Division 2.
Seeing so many people online saying how they are enjoying the game, I gave in. A week later I realized I haven’t played anything else.
Unlike most multiplayer games, I never feel FORCED to play with others. That is refreshing in and of itself. The game feels whole, there’s only a few bugs, plenty to do, and I don’t feel like I’m just waiting for some other game to come out.

My only complaint is the time I spend staring at the map trying to determine WHAT to do next.

I have named the two heroic men storming into battle on Panel 2 “Leroy” and “Jenkins.”

This pretty much sums up why I hate playing with random people online, and always try to go solo if possible.

I guess I’m spoiled since I usually play with people I know, and we do start off the encounter by a good opening barrage and set up positions to cover flanks. It really does change the game to work together using Discord to coordinate an assault, even lightly.

My sqaudmate always laughs because I run with Marksmen rifle and a LMG, so I tend to play cautious and strategic, choosing targets from afar…..until they rush me and I break out the Rambo-Machine, filling the world with bullets. Tim, if you need sqaudmates say the word.

Are people forgetting about Borderlands? The first was already fun and great, and each game after that pretty much improved and improved. I haven’t played the Pre-Sequel personally, but I doubt it was bad.

The master class in launching a looter shooter in a complete and finished state belongs to Borderlands.

That being said, I’m glad The Division 2 is doing well. Glad that the devs actually learned from their mistakes.I only wish the missions weren’t so damn repetitive. Otherwise I might have looked into buying it.

I believe it’s really more an observation founded on the amount of poor releases leading up to Division 2’s release. Fallout, Anthem, etc, have all been pretty poor showings at their time of release. So it’s a relief to see a good release in TD2.

Also TD1 was apparently rather weak on release.

I so agree with this. I play solo, but do the missions part in random groups and so many times do I see someone rushing forward and then dying.

At least they are smart enough that they come to you.

I am lucky enough to belong to a small but diverse discord gaming group, so we pretty much have a full squad for any game we attempt. It makes games I might have rage quit solo, or gotten bored with solo much more enjoyable. We usually start off with a grenade barrage after setting turrets (whole squad has them) that nearly destroys the waiting wave. (WT2-BTs have started to resist this tactic)

I’ve found that Rando-PUGs are never the way to go with these games.

That said, even with a legitimate, communicative, solid crew, the AI does some weird things with this game. The mobs constantly moving and twitching in ways that, along with the super tight hitboxes, negate the viability of a sniper and sometimes make AoE ineffective.

It’s still a game I rush home from work every night to play.

Him.
Reply to  Steve

I mean, if the AI is constantly twitching making Snipers useless and AoE weak, then wouldn’t you say that they are learning successful strategies against those two things?

I actually like the tight hitboxes as a sniper. True, the enemies don’t always move predictably, but I’ve managed to pull some super clean kills through a sliver of space because the clipping/hitboxes are so spot-on to the visuals. And it adds an element of leading the target/intuition when sniping. The fact that the enemies are so mobile is, for me, what makes the game so exciting and challenging. They don’t just plop down behind on barrier and stay there. They move up, they move around, they often try and get behind you, etc. You really have to pay attention… Read more »

And if you suppress them, they don’t pop their heads up or even move.

It’s this way in Destiny 2 and Warframe as well. Everyone wants to rush and then complains should the team wipe, blaming everyone for “being terrible”.

This is how every squad/team based game plays for me. The only exception is when I have a squad I’m well acquainted with and we are talking on either discord or through a system chat.

I usually know how it’s going to go the minute we all spawn, and I see all of my squadmates scatter in random directions. Nothing worse than getting killed from a direction you know a squadmate should be covering.

Although nothing is better than hearing in your headphones “gunner to your 3. gunner down.” from a squadmate.

So who’s copyrighted work did you steal to convert into those exterior landscapes?

Author
Tim
Reply to  Deary me

Those are screenshots that I took in-game using The Division’s photo mode, that I then painted over to use as background.

I feel like this is an old player versus young player preference. I had the same experience when I first started playing MMOs. When approaching dungeon bosses in WoW, I always wanted to take my time and figure out a strategy before we began wailing on it. The preference of most random players was to plow through every instance as if they were personally paying the other party members by the hour. Eventually the game evolved to accommodate that, and every dungeon run that drops any kind of meaningful loot is effectively a time trial. That’s why I don’t do… Read more »

You are asking for people to behave tactically during a FPS match when in the last 20-something years, the best strategy for FPS has always been charge and shoot first?
There’s a reason why the military doesn’t like gamers as boots on the grounds, it takes too much time to uncondition what videogames taught.

Compared to the original The Division. How does this one measure up?

Author
Tim
Reply to  The Toddfather

This one has launched in a drastically better position. The original Division eventually figured everything out, but it took them over a year. I miss the snow, but they definitely learned some valuable lessons for the sequel.

If I hit the previous comic button it goes back to March 8. What happened to everything since then? I missed Monday and Wednesday this week, and wanted to go back.

Use the top navigation bars from the front page. The side ones navigate to within whichever archive the comic is placed (Analog and D-Pad, Ctrl+Alt+Del, Console Wars, etc).

For what it’s worth, I will try to communicate with other players what I’m doing. I’ll tag targets, I’ll launch my recon drone early and get it into position to highlight enemies so the others can see, I’ll warn people I’m tossing a flashbang, I’ll call out targets when I can. But yeah, way too many people follow the “Leroy Jenkins” school of tactical thought, then wonder why we keep getting wiped and get all sorts umbraged when you recommend a temporary adjustment to their loadout. One conversation literally went like this: Party Leader: Dude, you need more firepower. Try… Read more »

Ha! I’m doing a side mission right now, and I’m pretty sure its the one this comic is based off (at least background wise)

So now, are you all still playing it .,.. My guess is no.
TD2 is plagued by (almost) the exact same dum decisions as TD1 was.
The developer, Massive, have no idea (or so it feels) what they are doing. Try to watch “State of the game” ( their “update show” ) and see all the negativity in chat.
When I saw https://cad-comic.com/comic/roadmap/ comic it instantly reminded me of TD2.