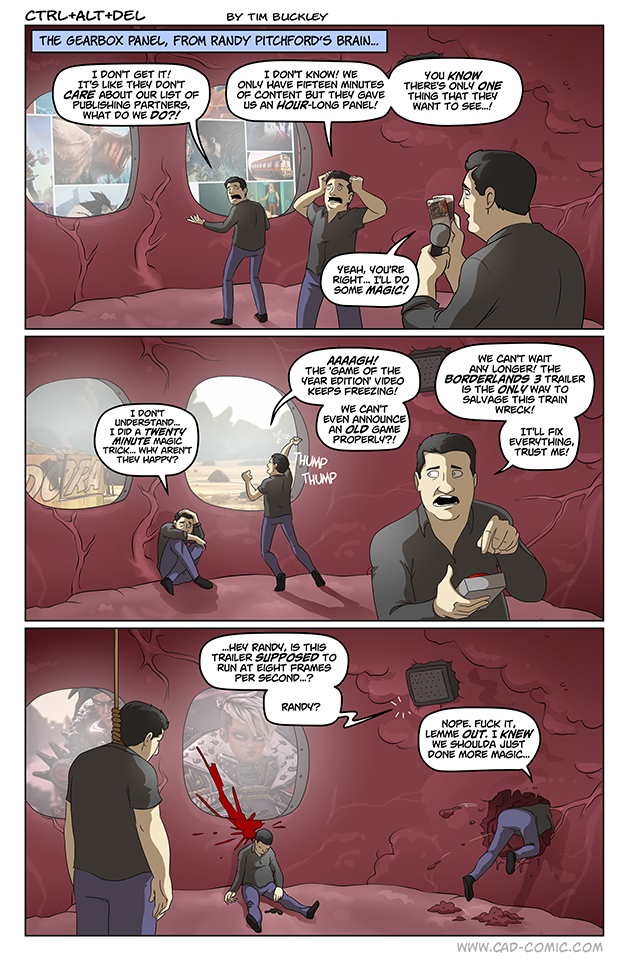 The Magic of Cringe

Wow, I’ve seen a lot of cringey game panel moments, but that Gearbox panel last Thursday was painful to watch. It was almost non-stop awkwardess; even the big finale we all waited for was not without issue. You can find the whole hour online if you’re brave, or just watch a cliff notes version.

Not to discount the difficulty of putting on a live demonstration in front of a lot of people, but it just felt incredibly unorganized. And there was too much filler. Like, don’t hold people hostage for an hour while they wait for the one thing they care about. Make your other announcements, and get to it. Stop with the padding for time (I actually drew an alternate comic on this for today, because up until the last miniute I couldn’t decide which direction I wanted to go). I don’t think we need all the extra fluff that gets thrown into game presentations these days.

In the end, we did get a Borderlands 3 trailer out of the wreckage, and it looks fantastic (or it does now, running at full framerate). Obviously they teased it out enough beforehand that we knew it was coming, but still seeing it exist is a big deal, and I’m hyped as fuck to go back to Pandora (or, you know, whichever planets we’re on this time).

There was a lot of talk about how the next Borderlands should fit in with the newer looter shooters like Destiny and The Division, and frankly, I hope it doesn’t. I’d be thrilled if Borderlands just continues to do the same old thing it did ten years ago. Let the other ones worry about the online component, and raids, etc, and Borderlands just be Borderlands.

Though if Borderlands is still Borderlands is another question that concerns me. The lead writer behind BL2 and The Pre-Sequel, Anthony Burch, is no longer with the studio, so it remains to be seen how the game feels without his voice involved in it. But I’m sure, ultimately, as long as we get to splatter creatures alongside a few friends and have a bunch of shinies pop out, the game will be pretty good regardless.

Twitch chat was terrible as well. The Borderlands fans logged in as soon as the channel started streaming content, which included Storytime and the PA Q&A and basically hijacked it to just hype BL3. Was very frustrating seeing people ask when Gearbox was on every other minute when the schedule is readily available on the Twitch site and Google is a thing. I like Borderlands. I was excited for the BL3 trailer and reveal, but it was just ridiculous.

Ahh, I tuned in directly through the Borderloads website front page, so mercifully, I missed any related internet chat.

i always hop into twitch for these. and if i see the chat is getting ridicilous then i just hide the chat.

I blame the woman in the audience that yelled “More Magic” 🙂

I guess I was lucky. We already had Friday tickets (so we weren’t in the room), and I didn’t think to tune in to the live stream until 2:45, so I missed all the time wasting.

Fun Fact:
If you didnt register BL1 to steam before the announcement, you dont get GOTY edition and have to rebuy it.
Ask me how I know.

Ouch. That kind of blows. 🙁

“We should’ve brought our own equipment.” Um. Duh.

they really messed up everything. even the magic trick.

tldw: cute blond girl accidentally showed every card was signed by the plant in the audience.

I actually enjoyed it. I mean, of course there was a lot of cringe, but still I was entertained pretty well (and in the way they planed it, not the watching-a-car-crash way).

Still, it probably should’ve been have an hour, not a full one. The smaller stuff was pretty nice, like Risk of Rain 2, but the magic trick, as much as I loved it (I mean I REALLY did not expect to see that :D), very much felt like filling time.

No one wanted to waste 20 minutes watching a magic trick, and after all that, after all the glitches, we got a new game that looks and plays just like the last two games. What a waste of time and money. 5 years development, and they give us the same thing they gave us last time.

… At least Bloodlines 2 release was done so much better, even if you could probably argue that it had so much more padding, but it was so smoothly done

The Twitch channel was a nightmare in the chat section. Nobody could get real questions in or commentary. Just a bunch spamming the same crude images the whole hour plus.

Luckily going full screen solved looking at chat. Once they finally got to the main trailer I was able to forgive them for the rest of it. Hopefully what they drop on Wednesday will be good too.

Yeah, it was a mess during the countdown. No mods, ascci images, spam messages. Terrible.

@Tim What’s the second comic within the news post from today? Is that a bonus one? Accidental? I’m confused. ?

Logan
Reply to  The Legacy

It’s a bonus for the topic, as he said two sentences before it.

Personally, I think there’s some wiggle room in the muppet:gameplay ratio.

Depends on the muppet, I suppose. I’d watch a whole game presentation by Dr. Teeth and the crew.

Statler and Waldorf from the Muppets all the way. ^_^

Wow – that would make any EA presentation almost watchable.

well, presequel was not THAT good so maybe it was the good time to let someone else try… still hyped AF

Yeah, it sounds like they gotta hire some better people to handle that sort of thing. At least their game quality is through the roof, usually.

Kinda sad the guy behind BL2 and the Pre-Sequel isn’t there, anymore. My ONLY concern for BL3 is how well (or poorly) they’ll handle the new “baddies” they have. They look a little too cliche to me, so I’m hoping that the plot around them isn’t.

Also, keep in mind that Borderlands has always had an online component. You could always pull in random strangers into your personally-hosted BL games.
Not quite the same as the live service games that became popular, obviously, but the online part is still there. They never really had raids, though… the game’s always been completely story-centric. So yeah, let’s hope they stick with what they know works.

I wish they would have. We got some good dlc, but still got raids too. Story is… well it depends on who you ask.

Another thing Gearbox got wrong: Nobody wants to see Randy Pitchford. After the lies about Aliens Colonial Marines, the continued lying and insulting of customers regarding Aliens Colonial Marines over the years, the petty jabs at Jim Sterling in that awkward as hell IGN interview, the stealing of money from SEGA, the accusations of embezzling money from Gearbox, and the accusations of child pornagraphy, I would be quite happy never to see and hear that sack of trash ever again. Don’t put him on screen. Don’t put him on mic. Shove him into a dark corner in Gearbox’s basement and… Read more »

Funny thing is since I had work during the stream. I got on during lunch, saw the countdown and decided to just listen to it, no video. So I didn’t get the cringe faces, no visuals of any of the trailers.

At first I though bringing the birthday people up was a proposal. Then I thought it was to show off the game. No, just some odd trick that did take way too long.

It was funny to listen to how much trouble they were having and the awkward improvement talk. Didn’t even realize the release trailer was stuttery.

I think the most hyped moment of the trailer for me was seeing rhys and fiona. i loved tales from the borderlands and glad to see they’re staying in canon for this game.

Middle Randy was like : “Gentlemen, calm down, there’s a solution here you’re not seeing”

I hope that the team that wrote tales from the borderlands got scooped up from telltale so they can write borderlands 3, they had far far better jokes and much more fun characters. maybe just get them to write the dialog while gearbox writes the story

I believe Anthony Burch was hired to consult on Tales as well, and even wrote a couple of the episodes.