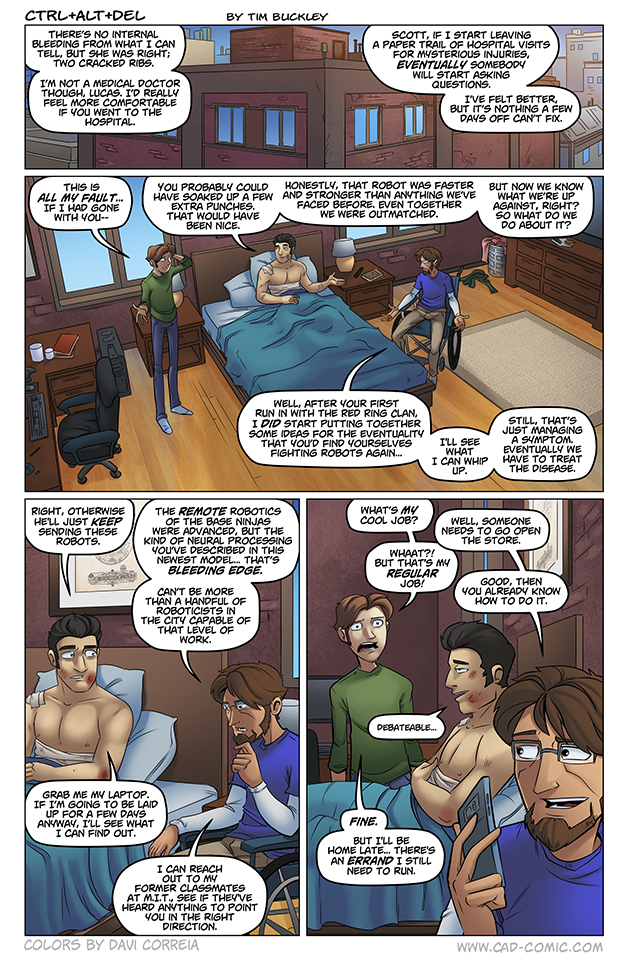 a handfull in the city? I am clearly used to living in a tiny country 😛 how big is their city?

Probably Chicago, Los Angeles, or New York sized based on the appearances we’ve seen of the skyline and type of buildings.

Roughly the size of planet earth about 100 years from now.

Er, the size of habitable area of Earth.
Also, I hope not.

Indeed. That really broke suspension of disbelief for me. I realize he couldn’t quite well say “there’s only one guy capable of that”, since that would twist the story into a Big Bad trope (there’s only one bad guy in town, and everyone knows who it is). But, at the level of sophistication we see in the background characters, it isn’t really very believable to say there’s a handful of guys capable of creating an intelligent android that can whoop two superheroes. “Oh, another one of those”. Perhaps it would’ve been best to just not touch the subject?

An alternate reality where super heroes and villains, advanced mystical/magical/genetic powers and tech are taken as business as usual… and multiple people working in advanced robotics is what’s tripping you up? 😉

FWIW, Omnitropolis is to technology what New York/Paris is to fashion, if that helps you out. It’s considered a hub for that sort of cutting edge stuff.

And finally, Scott said “capable” of that level of work. Not “producing.” Meaning there are likely only a handful of roboticists in the city that are in the ballpark of a breakthrough like that. 🙂

Well, of course when you put it /that/ way… 😛 Nah, but I mean, we haven’t seen any indication so far that fancy advanced AI robots are a normal thing in Omnitropolis. Superheroes, yes. This isn’t meant as a jab or anything; I realize you couldn’t really address the issue in any other way without sinking into the all too common trope “Weird things afoot? It must be Dr Weirdo!” I guess my point is that I was already expecting superheroes and supervillains in this reality (i.e. we literally see them flying around and people don’t freak out like there’s… Read more »

Really? You’re just NOW questioning how many people can build intelligent android when pre-reboot Ethan could do it? Although I guess the reboot is supposed to be more realistic.

Man of the West
Reply to  ask christensen

That statement didn’t trip me up at all. Maybe its because I live near the Silicon Valley. In certain regions, there is a lot of cutting edge technology being made.

Well, after learning that some wizards can set up tentacle bombs, I think I can safely assume there are at least few people making robots in cellar…

A Metropolis can have a huge number of people, given that Tokyo has about 36 Million people. Even if this city is nowhere near that crowded, the sheer number of people would guarantee at least a handful of experts in any given field. Not even taking random “super intelligence” powered people into account.

Does this errand involve a certain reporter?

Hamstermer
Reply to  Man of the West

You know, I was wondering when that would happen…
OI! TIM! Was Lilah’s job in 1.0 originally going to be a reporter? We never got specfics but it sounds like she could have pulled that off. Also fits in with not-rory dying in a robbery or something.

Scott was a graduate from MIT?
…
How did he become part of Ethan and Lucas’s 2.0 lives then…
Maybe no one wanted a Linux user?

he found out the M.I.T was just a front for the government to have access to fresh brains to develop new weapons, he didn’t want to have anything to do with that

I have a feeling that the errand is something more personal.

I laughed hard. Good wrap-up to the action!

What if it’s related to the “tentacle bomb”, and the look Ethan had at the end of the last page?