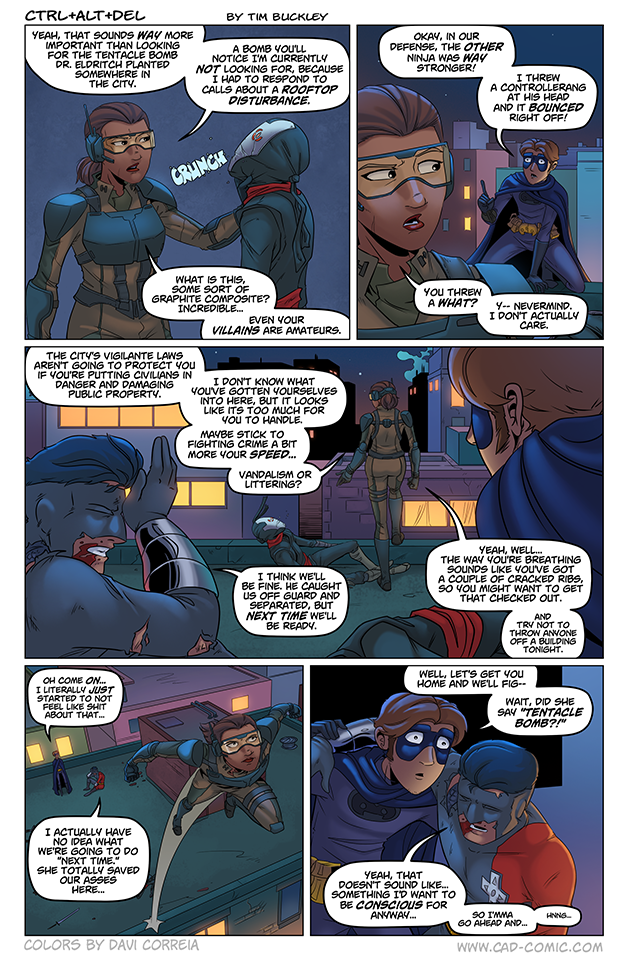 Man, what a DICK!

You mean not asking the newbies for help finding a bomb? Lol Seriously though she is right on the other stuff.

She is but her attitude is ten miles up the sphincter.

She’s government appointed and created, everything “great” about her was created in a lab. At least Captain America isn’t an elitist bastard.

I dunno, I kinda like Captain Prime now. Someone who doesn’t believe in sugar-coating the truth, and also doesn’t fall into the usual “superhero problem” of letting the ‘amateurs’ keep trying to fight crime. After all, it makes her look bad if they get hurt.

I mean, sure, the “don’t throw anyone off the roof” was a bit much, but everything else was logical.

Making fun of them because those grunts were weak was kinda lame, though. She knows they fought off a horde of ninjas previously, and there’s a bunch of destroyed ninjas on that roof that Lucas beat earlier.

kinda wanna see what it does, now…

Dr. Eldritch? Tentacle bomb? Kinda on the nose for a bad guy, isn’t it? But then, most of the supervillians in comics usually are… Either way, I can’t wait for Wednesday!

The look on Ethan’s face on the last panel is interesting… that’s not a “wow, that’s weird” face, that’s an expression of sudden realization. But how would Ethan know something about “tentacle bombs”?

Google tells me a Tentacle Bomb is an enemy in Starbound, but that doesn’t seem to match the context.

Now to see if Ethan can pass an extra life to his buddy to patch him up.

Yes, they REALLY aren’t cut out for superheroics…. One of them has DYING as a superpower, the other throws energy blades, but it’s already been seen that even a normal person with enough training can elude them.

And, since immortality is Ethan’s ONLY power… Just strip him of his toys, lock him in a room, and bam, instant playtoy!

@Jon Ethan’s immortality can be a useful power. Ethan just doesn’t really train extensively or else he’d really be a threat to villains. Imagine if Batman had Ethan’s power.

Big thing is that our two heroes just do the hero thing more as a hobby really than as a job. If they were truly serious they would’ve done some pretty intensive training before getting into the hero business.

Not to mention that it isn’t just immortality; he gets fully healed and a short teleport(?) when he dies. His gear is also restored. He can and has abused this by killing himself to gain a tactical advantage, or to recover after injury. It doesn’t directly power him up, but it opens up all kinds of otherwise impossible tactics as long as he can withstand or cancel out the pain.

It is potentially scary if he gets captured though.

It’s nice to see a female super hero in not only a sensible costume, but armour as well. And with a tactical attitude!

Now we are in uncharted territory.

What would be tactically smart is to go on the offensive:

Destroy the kill switch for Zeke, incite conflict between Zeke and the Red Ring, take down Zeke while he’s distracted before he can kill the Red Ring, then arrest both.

The last line of Captain Prime: might this be an indication that it’s Lilah? If I recall correctly she saw Ethan drop the guy from the roof?

Man of the West
Reply to  Timothy Blokland

Not to say yes or no to your theory, however I will say that Ethan dropping the troll made all the papers. Captain Prime could have read an article by Lilah.

I know this isn’t gonna sound PC but Lilah isn’t Captain Prime, the skin colors don’t match. Cap is some kind of unknown brown ethnicity while Lilah is white.

Well you never actually know anymore. I guess I’ve been on the dark end of tumblr and Facebook too many times.