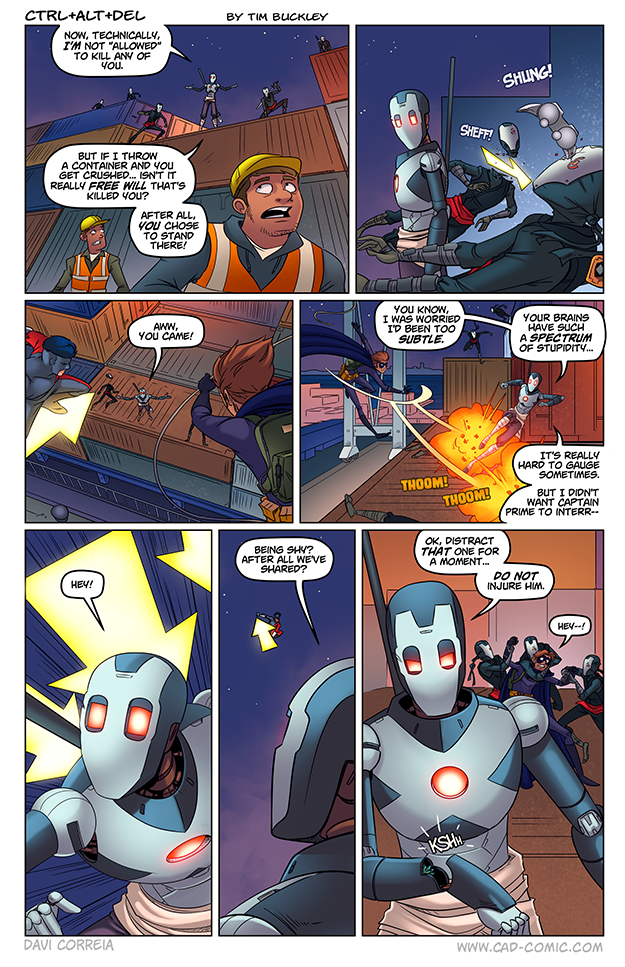 I just realized the new Zeke looks a lot like Iron Man…especially the face plate.
Excited where this is going.

He’s got that Convergence of Cyriss vibe going on.

Really when I first saw him I was getting Deathstroke vibes

I figured that Zeke would have anti-air capabilities. 😛

Hamstermer
Reply to  The Legacy

Nah, its just that his arm is broken 😉

I think “Kshh” is the sound of a door in star trek. Also, he ducked the attack, and there wasn’t one shown that could have hit the arm. Pretty sure he’s either got something in there, or he’s part transformer.

Oh look a smart badguy that actualy exploits the weakness of ethan’s powers. He cant actually respawn if you just dogpile him and don’t actually injure him. that arm thing though. I’m thinking someones about to have an even worse day than a set of cracked ribs, and those suck.

How hard can it be to find out? He didn’t get crazy combat prowess. He’s just an unkillable idiot. Probably died a LOT learning how to fight.

They only just reached the view of the public, though. How much data is there to work with? The media has seen him tie people up, use exploding shurikens, and swing around. That’s about it.

He has shown it off in public vs the guy he dropped….. is there a connection though?

One thing to remember is this is not the first fight with the redring clan. In the very first issue ethan fought the robots and respawned multiple times after killing blows were landed on him. At one point he was even grabbed from behind and threw himself and the grappling robot out a upper story window to escape the grip(presumably respawning outside on impact) As all the robots are networked and controlled remotely the leader has seen his power in action enough to have a reasonable chance of grasping the basics and would have likely given zeke that info to… Read more »

Looks to me like he just wants to use Ethan as punching bag later.

Pretty sure that still counts as killing, Zeke. Nobody in their right minds would chose to stand under a falling aka thrown container. xD
I wonder if his creator sees his self-made Zeke as evidence that technology must be finished before intelligent robots like Zeke take over the world?

I’m pretty sure that this is a tongue-in-cheek joke of Zeke’s. I don’t think the sociopath who is behind the Red Ring Clan said, while programming hin, “You know what would go great with my ninja death robot? Asimov’s three laws of robotics! That would make sure that it has regard for human life and obeys any orders that any person gives it.”

This is actually covered in I, Robot’s short stories. One has a robot with 2.5 laws. It’s allowed to not save a human. Was built because robots were trying to “save” people from a minor radiation hazard that was robot-lethal, and it was getting expensive. This exact case of dropping a thing, knowing that it *could* catch it, but then not, was the loophole the shit version of the first law produced. IIRC, it just left off the “or inaction” part.

I love how this story is going. Like you can see all the elements from the previous universe coming together so well. So much love.

Man, Zeke is quickly fighting with Scott for being my favorite character in A&D. He’s just got this childlike glee that he sees the two. Plus, he’s a smart, dangerous enemy.

I hope the EMP doesn’t destroy him outright.

My first guess is, that the EMP does not go off, but Cpt. Prime comes to the rescue…again.

My second guess is, that Zeke’ll get green eyes from the EMP…^^

I’m thinking they ‘save’ most of the phones from going in the water by using the EMP to scare off Zeke. But the EMP actually ruins all of them anyway.

You mean, the phones that are in large, fully sealed metal containers? Shipping containers are basically Faraday cages. Unless the phones are in direct contact with the metal walls, they’re shielded.

Last time, Zeke got rebooted from a heavy thing of wood falling down. My guess?
MGS style:
SHIPPING CONTAINERS!

So… anyone else realize that if they detonate an EMP on that ship… it’s going to fry all the super fancy phones along with the robots? And isn’t it likely that Zeke has some sort of anti-EMP shielding?

Been discussed on a few strips. It’s stated the EMP is short range, may not even hit the phones. If the phones are off, may not cause any damage to them anyways. I don’t know if it’s true or not but you can check previous comics for more discussion.

A shipping container is a large, fully sealed metal box that is not in direct contact with the phones. In other words, it’s a Faraday cage. The phones are shielded.

Phones will be fine. You do have a good point about Zeke having Anti-EMP shields…

What I am wondering for awhile is when zekes old girlfriend is going to show up I mean she has to eventually, right?

I hope not, TBH. Was not a big fan of Embla.

I could easily see Zeke as becoming a protagonist and Embla being his replacement.

I am hoping the EMP shuts him down and Scott can reprogram his friend/foe recognition so he helps A&D find the head of the Red Ring Clan. I also think the head of the RRC would approve of that twist. Using tech as the tools it was meant as.

free will that’s killed you? did you mean that and not that’s?

Not really… “That’s” can be used as a contraction for “That has” as well as “That is”.

“That’s” is grammatically correct but “that” would have been also.

Yup. Both ‘that’s’ and ‘that’ are certainly correct in the grammatical sense, but one will find that the sentence ‘isn’t it really free will that killed you?’ would be the more commonly used of the two 🙂

This universe reminds me of the differences between FF1 and 8Bit Theater, only not as dark. The former is all friendly and has its dark bits both overall is a place of light and goodness. Then the latter is in a way a corrupted version; Genocide is a biweekly event, racism is abundant, the “Heroes” are maniacal murderers, etc. Also, some of the normal antagonists are surprisingly decent people. This is somewhat similar. While the world isn’t loaded with racism or genocide or anything, it is a shade or two darker than 1.0. Zeke is not an ally of the… Read more »

I wasn’t expecting someone to reference 8Bit Theater here. Not a complaint, merely an observation. In fact, I was pleasantly surprised (;

Love your name, too!

I am expecting captain prime to show up

I really think Ethan needs to get some actual combat training in, I know he’s kinda the joke hero, but it would be nice to see him… at least able to hold his own once or twice.

Ethan relies on his BRAINS instead of his BRAWN.
Which is to say, he takes out people’s intelligence instead of their awareness of their surroundings.
(Actually, 1.0 Ethan would do that. This guy is a fair bit smarter)

ya know i’ve seen about almost everyone except for ethan’s brother, his old girlfriend, his old boss and Rob. now i haven’t seen into the comics you’ve made just the free stuff.

http://cad-comic.com/comic/winter-een-mas-2017-page-6/ He apparently works for MegaGame in the reboot – you can barely see the name “Rob” on the nametag.

It’s hard to tell, but it is possible that Rory has been Butterfly-effected into being Carrie.

Zeke is certainly nuanced in his views on killing. It blatently suggests that all that keeps it from murder is it’s orders and yet it goes easy on it’s kill-list targets, Analog and D-Pad. Red Ring himself was annoyed about this. A pretty good counter argument could be made to say that Zeke likes to play with it’s food before eating it. Ethan is immortal so Zeke ordering a submission order doesn’t prove much. Still, Zeke could have ordered his back-up to beat the shit out of Ethan and instead said “no injuries.” Nuanced. We have to read more to… Read more »

Robin Sizemore
Reply to  Man of the West

I’ve been assuming Zeke was trying to undermine Red Ring. He may not be secretly “good” exactly, but an intelligent machine can’t be particularly happy working for anti-technology zealots.