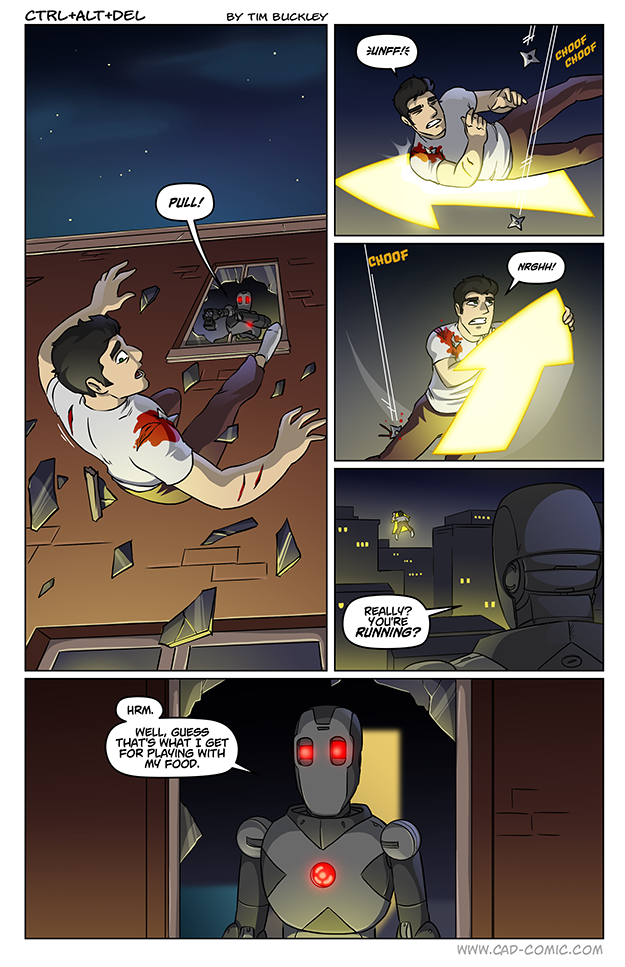 Daaamn. Zeke is a cold bastard in this.

Something tells me finishing off Lucas was merely a “side quest” and capturing Ethan was the main mission.

Glad Zeke is not that good of a shooter. XD

I literally just noticed that Zeke has the red ring of death. He even has the top right segment missing. I originally just assumed the red was just a visual sign of his alignment. Wonder if this plays into a possible redemption, like Ethan fixes his red ring and he turns green and complete and becomes a good guy.
I don’t know why I’m so convinced he will become a good guy, there is no evidence whatsoever but he seems like a good and popular character, easiest way to keep him around is redemption.

Well, he is forced into service (as per his own words, the guy giving him orders has a kill switch – well, unless he was lying), so I think it’s quite possible he’d be doing something else if free (though not necessarily become a “good guy”). In previous strip someone commented, that he could be in fact intentionally sabotaging his kill of Lucas, pretending to fail, as his master is probably remotely watching everything that happens through some camera built into Zeke – I think it’d make sense and is possible.

Red Ring Redemption? :p
After all he had those red eyes also back then when he (in the other continuity) he burned down the house where our until then merry crew lived.
However, it might be that other continuity – other rules.

What I am actually afraid of is what _might_ happen when Sam the Gameboy joins Lucas in an effort to free Ethan.
But then – why even bother? Ethan dies, respawns and is free again… 😉

Might wanna rethink that “is free again” thing. There are several examples in old stuff (mythology, literature) where an immortal foe was thwarted by being imprisoned.

Ethan seems to respawn either in the same spot he died, or within throwing distance. Just lock him up somewhere big, solid and isolated enough that he won’t respawn outside of it, and he’s done.
It’s not like he has any other supernatural tricks, and taking away his gadgets is part of the obvious precautions.

… who said that of all of the terrible, excruciating, torturous, insanity-rending things that are about to happen to Ethan, death was one of them?

There are so, so many worse things that can happen to a man other than death. He may beg for death by the end.

Hope they do it by locking him in a industrial kiln or something.
Or wrap him in a blanket until he overheats.

Wearing socks in bed? To each his own I guess, but I couldn’t handle that even in the dead of northern winter.

Probably to make the drawing a slight bit easier.

Hmmm. My first thought after seeing zake left Lucas to run intentionally so as to find any secret lair they might have (notice the shurikens stuck on Lucas; think hidden GPS), but while writing this, another idea came to me:
What if it’s meant for Lucas and co. To find “him” and subsequently, his boss?
Remember he said that he has his own will and obeys his boss because of the kill switch. Them following zake may end in his boss’s capture and his freedom.
Food for thought, eh?

I’ve got a hunch that Zeke is a good guy, or at least neutral, but his “creator” is forcing him to go after our boys. When he deliberately gave them a clue to the location of his next crime, or when he “played with his food” instead of fighting a bit more tactically, he’s actually making small, deliberate mistakes in an attempt to betray his “master.”

yeah i would consider “playing with his food” to apply to using shrukien instead of something more useful….like bullets

Any really bad guy would have poison on those darts.

That seemed intentional, letting Lucas go to save Ethan and take down the bad guy to free Zeke.

Damn Lucas got messed up. Not sure how much we’ll be going with the “walk it off” kind of healing, but looks to me like he’s down an arm and a leg for a while at least.

Is there a limit to the amount of space Lucas can spend on his arrows? I don’t see why he didn’t make a surf arrow and then a smaller shield arrow or something here.

Lucas conjured two arrows at once at one point there, but after being hurt he would only make one at a time.

It’s only common sense, that being injured would lessen his ability to harness his super-power.