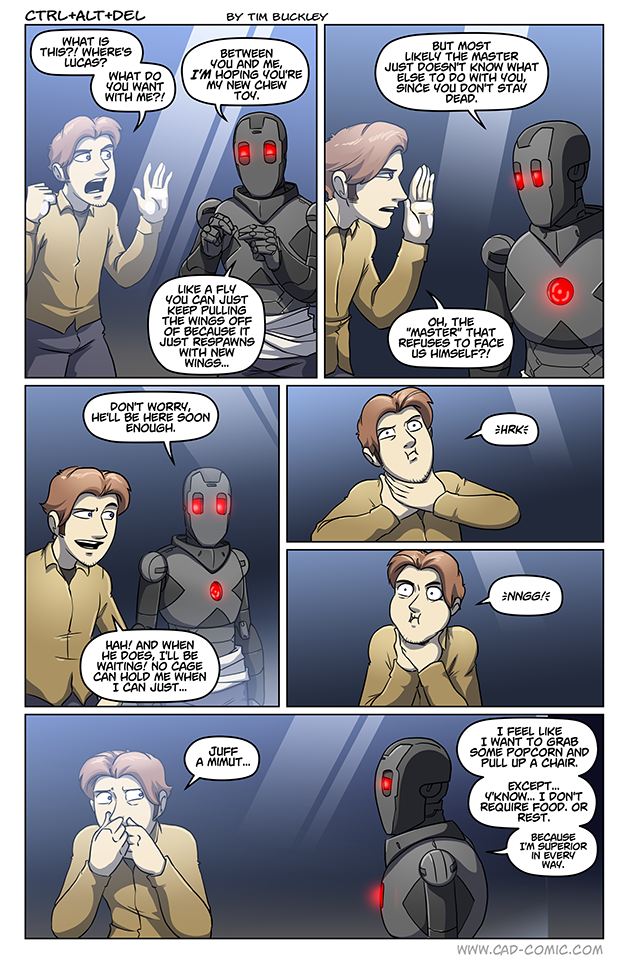 Reminds me of the cute little Spanish boy in one of the Asterix comics who tried to blackmail everybody around him by threatening to hold his breath “until something happens to me”.

Yeah.
You might lose consciousness (if your self-discipline reaches epic levels), that’s all.

Oh, and a Happy New Year everybody.

They have left you clothes, hang yourself with them, you are not a Metabaron

He’d need somewhere high to attach those clothes to hang himself, and I don’t think he can reach the air holes. Choking on them would be easier.

Doesn’t even have to be that high, just around doorknob height. but yeah definitely nothing in that box to hang himself from

Nobody
Reply to  Rex Vivat

The drop is part of a proper hanging because it reduces the suffering of the condemned. Breaking the neck knocks them out so they don’t suffer as they are strangled to death.

The numerous cases of auto-erotic asphyxiation that come of every year shows that it isn’t needed to get the job done. Tie his pants leg around his own neck tight enough and he will die unless they come in and take it off of him.

I repeat my post from last article about them being smart enough to place the breathing holes beyond reach. lol

Well, Epstein was able to commit suicide by hanging, even though he shouldn’t have the change to. Also, both failed to commit suicide before, and needed to be monitored.
Later Suicide Watch has been deemed unnecessary.
In Ethans case, because of his power.
In Epsteins case, because he claimed one of his cellmates wanted to kill him.
If now both of the cameras i.e. both of Zekes eyes, turn defect and the guards (Zeke himself) falls asleep, even though he shouldn’t, we might see a reconstruction of how Epstein killed himself.
Or does anybody disagree?

You are all right, I should have said “strangle yourself with them”…my mistake

I dunno. If you can’t partake in traditions to mock and belittle your opponents. How superior are you?

Happy New Year Everyone. May it be better for you than the last.

So should we be excited that we finally get to meet the master? I mean what odds are we giving that it’s someone we know?

It’s going to be Ted…

I’ll be honest…. I could just sit and listen to Zeke being a smartass forever. His writing is hilarious in every fucking pane.

Ethan has an audience! Talk the bugger over to your side or self destruction. Zeke Just said that he wants to stick around so capitalize on it.

What is Ethan doing at the end? Trying to strangle himself?

If you’re superior in every way, why do you have a master? (conversation ensues…)

Am I the only who thinks “Master” is OG Ted’s Penguin?

You are not. I was just coming through to see if anyone had predicted the Linux Penguin yet.

This is the part where Ethan breaks his arm, exposes the arm bone, and stabs himself in the heart with it.

If you’re superior in every way, why do you have a master and I don’t?

It would take a few days to die of thirst and some weeks to die of hunger. Were he to bite his own wrists/tongue… Now I am starting to think he should get some explosives implanted to his body so he could easily Chiaotzu (Dragon Ball Z) himself.

Off the top of my head, Ethan:
1) Bite you tongue
2) Bite open your veins
3) Smash your head open on the glass or the floor
4) Smash your windipipe with a punch
5) Eat your shirt and jam your throat closed with it
6) Strangle yourself with your pants

I have sortof been wondering: In most games you don’t have an unlimited amount of respawns. Having Ethans ability would be terrifying – sure, you might “blip” back into existence… untill you don’t. Does Ethan have an intuitive feel for this? Does he know that he will respawn? Or does he just assume that he will?

I’m not sure, but I think it was indicated that he has no idea. That he worries about it sometimes.

he was trying and failing to strangle himself and force a respawn.

Would wager that since Ethan resets to last state and place to be alive on death, he just respawns into cage

Considering the first time he respawned, he respawned next to the couch on the opposite side of Lucas rather than on the same side he died, I would say he just randomly respawns somewhere or has some sort of “choice” where he wants to respawn. The latter feels like a possibility due to him respawning behind the Robot Ninja the first time we even see him respawn while he died on the sword in front of the Robot Ninja. Same way how he has respawned a ton of times just in the same location like when he killed himself after… Read more »

Also, I still would wager “master” is Emily the UPS-girl

Unlikely. Zeke’s master was motivated by a hatred of technology, while Emily actually enjoys JRPGs.

And then irony of irony Ethan chocked on his own vomit.