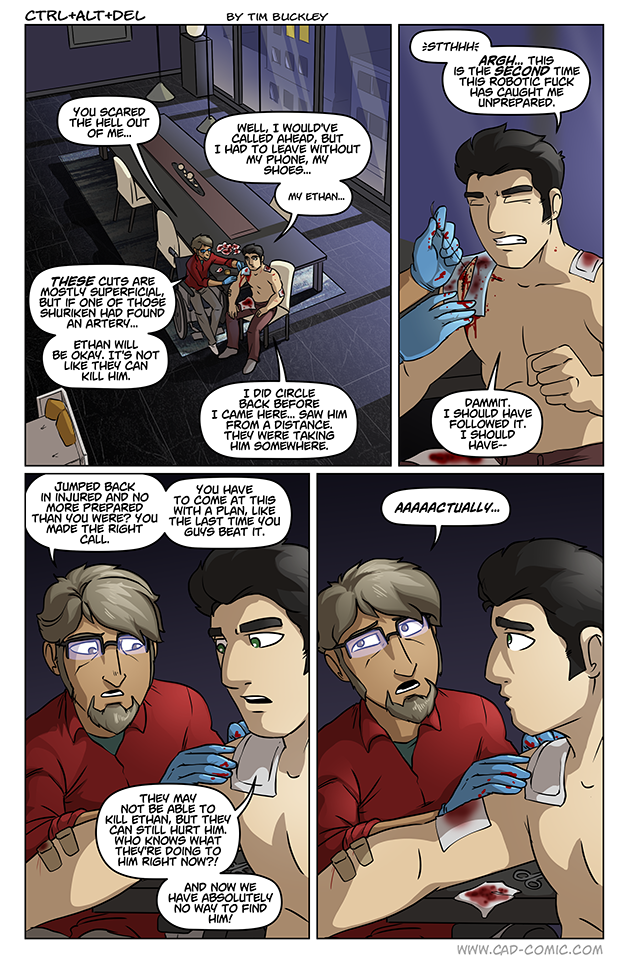 NOW I am curious.

Must have a density detector… I bet the scanner shows up a couple of near by Neutron stars… plus Ethan.

He put a tracker on Ethan, didn’t he? Honestly, I’d be more surprised if he didn’t. This is Ethan we’re talking about.

Problem is how would you put a tracker on him or in him that would respawn with him every time he dies? Although it IS worth pointing out that when he respawns he is always fully clothed and has all his gadgets…. Does he get back all his gadgets when he respawns, like a full reload? Either way, I’m willing to bet this tracker is in something Ethan flat out refuses to go anywhere without, something very personal and probably related to his sister, like a locket etc. Otherwise he’d forget it, loose it or there would be the risk… Read more »

But if it is something belonging to his sister, would he really risk bringing that into battle with him where it could get lost or damaged? I know soldiers will do that with wedding rings and such, but this is a situation where he’s a masked hero and the object in question could clue someone into his identity possibly, so……seems dubious

on the other hand he was in his civvies when captured. It would be more reasonable to have some sort of keepsake on him when relaxing around the house. If he wont take that out heroing then just tag the keepsake and all his costumes.

If it was surgically implanted and allowed to heal, it could definitely stay in after respawns (whatever it is)

That was what I was thinking. If it was surgically implanted into Ethan and the wound it was implanted in healed up naturally to the point that he was back in perfect health then it could easily respawn with him. Big thing is that we need know what Ethan’s powers do. I imagine Ethan’s captors are going to be working on that.

The question is where did he put the tracker. I say he put it in his butt, left cheek probably.

One Ethan-detector coming right up!

Can’t blame him. If I had a friend like Ethan, who also happened to be immortal, I’d look into tracking measures as well.

Dauym. I don’t think we have seen Scotts home before – I thought he was working in the gameshop, but clearly he is just there for fun.

There have been subtle hints that he is independently wealthy for awhile now. You didn’t seriously think Ethan funded all his gadgets did you? lol

Makes me wonder why the robot’s boss, for all of his preparedness, didn’t think to look through the entire network of people connected to Lucas and Ethan, rather than just attempt a direct ambush on their home turf. He should know they own Gamehaven, and would thus know that Scott works there, unless he’s only employed off the books (which he may well be; we don’t know for sure). Still, you’d think the mastermind would have scoped it out via camera or something to identify a pattern, such as the dude in the wheelchair who was always around.

It’s possible Scott is considered a lower priority because, y’know… he’s wheelchair-bound. It’s a lot harder to fight when you can’t walk.

Alternatively, they might not think he’s even a target at all – they could think he’s just an employee/friend, not involved with the duo’s crime-fighting life.

…I’m assuming he learned after Carrie.

He’s been around them both long enough to have learned that skill through the inevitable patching up of them both during their years of being supers.

My not medically trained mind has trouble parsing ‘superficial cuts’ and stitches. . .

The superficial might just be that they didnt hit any major arteries, nerves, or organs and the damage will heal with no long term damage unless the wounds become infected. Stitches are still a good idea for wounds that will not stay closed otherwise, and are often used on even superficial wounds to keep the chance of infection down.

He does say “mostly superficial”, which means some of them are at least a little ficial, just not ficial enough to warrant an actual doctor.

Even my totally superficial stab that only separated the skin from the fat and muscle had to be stitched. You don’t stitch stuff like Muscle.. that just has to heal on its own.

If he put a tracker inside Ethan after he got his powers, would it stay in him after a respawn?
His clothes come back, so it’s not out of the question.

Anyone ever notice that Tim leaves the slightly larger cliffhangers for Friday?

And then doesn’t update on Monday?

Everyone keeps saying that he knows where Ethan is, what I got from it was that Ethan might actually be killable

I don’t think so – he flat out says they can’t kill him, and the “actually” line is in response to Lucas saying “we have absolutely no way to find him.”

Ethan is absolutely killable. His power is that he doesn’t stay dead – he respawns in his last healthy state.

The thing is, He still gets killed, and he still experiences his own death. Over and Over. I am sure that it hurts etc also. I would think that would do some kind of damage to ones mind. The other scary part, is he will only revive until he doesn’t. What happens if he is part Cat and only has nine lives? Does Ethan KNOW he is going to wake up?

I think we were referring to permadeath, not Kenny from South Park

I thought so too. It looks like he won’t stay dead IF the cause of death was one where his body took DAMAGE from external sources, such as punctures, cuts, being smashed, etc… but I’m guessing he can die if starved to death, of old age or other natural causes.

I recall a previous discussion of Ethan’s respawn abilities. It was posited that Ethan could perhaps be killed by slowly starving him to death. The theory was that when he died he’d respawn to his most recent healthiest state, which unfortunately would be a state of total bodily dysfunction that was only moments away from death. Another option was to maim him horribly (say, remove all limbs, tongue, eyes, etc), ensuring he survives and that he otherwise returns to good health. After that any death would theoretically result in this horribly maimed and traumatized person respawning just as they were… Read more »

Of course he has a way to track Ethan. Probably not an actual tracker, since I imagine that would disappear with each death, but some sort of geotagging and a constantly tasked satellite linked to his heat signature and pheromonal output? THAT I can believe.

Or just that Scott’s a Widowmaker main and he has his Wallhax charged.

Erik B
Reply to  Brent

I actually think it would not disappear. He seems to respawn to his last healthy state, and for all intents and purposes, a subdermal implant that has healed in would count as still healthy.

I wonder though if this was something Scott wanted to test, and insisted on getting to try killing Ethan. Just a little own sadistic fun for himself, haha.

Erik B
Reply to  demoncat4

Josh? Do you mean Lucas?

Probably chipped him like a pet. Can’t blame them, Ethan is basically this universe’s butt monkey.

He probably hid a tracker in a bit of cheese…

If an External tracker back of boxers waistband, All of them.
If an internal tracker under armpit so it would stay there if he got limbed and in an unlikely spot to be damaged from being punched, etc. in a fight .

I bet he put a tracker on Ethan just so he could be found if he got into trouble. Of course we all know it wasn’t meant for use when they are heroes but for Ethan’s normal shenanigans.

I find it interesting that this version of Scott reminds me of how the author draws himself on the occasions where he draws a comic about his domestic life… I wonder if he imagines himself (as a web artist/comic guy) in the ‘stays in the van’ hero-assist role vs. an active hero?

Internet theories: Dime a dozen (thousand) and worth every penny you paid for them!

im calling it, Scott is the robot’s boss he IS THE BAD GUY, or might be totally wrong

“So, funny story, remember that time that Ethan was considering selling his kidneys for a video game? Well on the off chance he actually WENT to Tijuana I put a tracking chip in him while he slept, sort of like the ones you put on a dog”

You pretty much called it. Good job.

I wonder what reason they would even have to hurt him, the whole point was to stop him from interfering with their plans, torturing him doesn’t really do anything? They should already know about lucas now that they’ve seen him.

But torture is fun! If you’re a sadistic robo-AI anyway.

It might actually be possible to permakill Ethan. His power so far has been triggered by deaths caused by external damage (cuts, stabs, etc) and it might not work with natural causes such as old age… or starvation.

Which makes tracking him down a race.