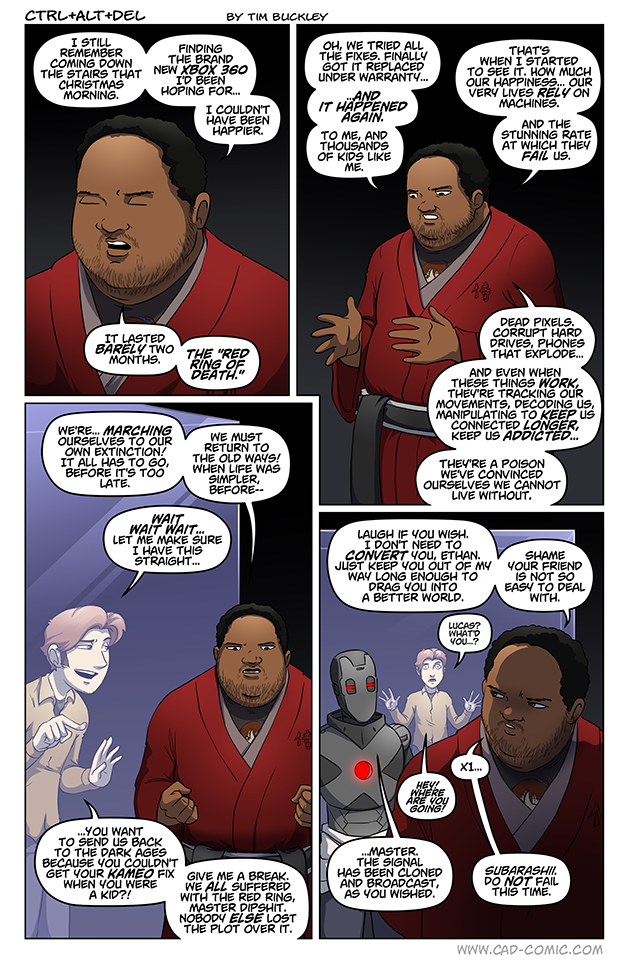 Seems while he may have a stupid reason, he isn’t stupid

I don’t know. I mean the way he got there may have been dumb, but he’s not totally wrong. We are completely dependent on machines. The irony is, he is pointing out that we cannot live without technology, so his plan is to destroy all technology. Kinda flawed thinking there.

He would probably reason the other way round: Why would anybody even be trying to look for ways to live without technology, while it conveniently still is available and probably already sitting in your hand anyway?

oh please. This is always the dumbest logic I’ve ever heard in any storytelling ever.

Stupidity: We’ve become dependent on Machine’s. They need to be Downsized or Destroyed!

Logic: Okay. You just need to destroy all farming equipment that mass produces food for billion’s. Medical devices that keep million’s alive. Oh, also 90% of all transportation, meaning you’ll have to walk everywhere whenever you need something.

the thing is, you take it as him wanting to “save” every individual human. thats not his goal though. he wants to “save” “humanity”. that includes letting billions die so the rest can live without the “evil machines”.

Well, yeah, Nextgener, if the villains had thought everything through so that their goals coincide with what’s best for the majority of people, there’d be no reason to stop them.

Oh I never have problem’s with villain’s doing this. I just have a problem with people thinking they might have a Point.

Like the people who think Thanos was Right make my brain melt. This Japanese Weeabo is on the same level of Thanos.

“Let’s not try and make the world Better with our Power. but instead Dominate and Destroy”

The Schaef
Reply to  Nextgener

Technology is why we became the dominant species on the planet. Because we can think and create tools and such to give ourselves an advantage over other species that are predators or competitors to us.

You describe the original sin, eating the apple. That is, it was not a sin because men weren’t capable of sinning before they ate it, but after eating it, men could not live without sinning.

Some people want to un-eat the apple, but this cannot be (un-)done. We think.

Ohoh looks like that safety scott put in backfired

Maybe there is a long trail of breadcrumbs now leading to a certain lair.

Maybe a certain master was not specific enough when saying “the signal” and a certain robot is now receiving his daily do-not-explode signal.

That’s the voice I’ve had in my head for ALL of the “Master”‘s dialogue!

“Machines fail us at a stunning rate and we rely on them too much. Now don’t fail me this time, machine I completely rely on to do my bidding.”

Ugh this guy is so awful. 🙄 “Master dipshit” is a huge understatement. I bet that even if the rest of his plans actually worked out the way he wants, he doesn’t have the will to go through with turning off his own machines.

Dan I
Reply to  no thanks nintendo

Seriously, my guess is we’re gonna find him playing Smash or something in couple of pages

Robert Loughrey
Reply to  no thanks nintendo

Particularly when he realizes that means people will die sooner because there are no MRI machines, or on a personal level, he can’t get some foods in the winter because even farms are dependant on computers now.

Looking at him, I would assume that he realizes he made a huge mistake once the Doritos production comes to a stop.

Honestly, to a person that deluded, I wonder if he would truly think of that as an error in his way of judgement, or simply necessary collateral in the war to free people from their enslavement.

You don’t make an omelette without cracking some eggs, after all.

Check me on this. But wasn’t the issue of the Xbox failures due to the company going cheap on the manufacture of them? Similar to the battery and failure rates of the other materials? And the whole tracking thing is done by corporations and the government for their own uses?

Gotta blame someone or something. And if your target can’t talk back, so much easier to keep going.

If your target can’t talk back, make a humanoid representation of it that can, so you can routinely electrocute it and threaten its death.

A rager that took it to the next level.

“we’re marching to our own extinction!”
Funny that the human-killing-robot-inventor is saying that~~~

Have fun with your fractured Japanese and your insane conspiracy theories………

This man has incredibly flawed, incredibly stupid logic, and I’m going to treasure the moment when he goes down.

I think the comment from two comics ago reigns supreme after this.

Lord of the Neckbeards

With all that Otaku stuff, I was sure he was a PS4 guy upset that Sony was censoring Senran Kagura.

We can see a little bit of his shirt. Anime girl? Of course it is.

Looks like no one likes the dim-witted overweight black bad guy. I mean, sure, he’s the bad guy, but at least make it a likable bad guy (like Palpatine or Clarence Bodicker). This one is just annoying.

Just an observation, though. Loving your work.

Okay, as a comic book geek who has spent countless hours trying to explain to people why Hawkeye is NOT a worthless Avenger, I find myself really irked by Ethan’s power. It seems to only exist to explain his odd behavior and give him the occasional psychosis. To be fair, though, there are TONS of Marvel and DC heroes whose powers do pretty much the same thing and their growth as characters are centered on them coming to terms with their limits or overcoming them, so I can’t complain or be mad by Ethan’s ability to re-spawn. I guess what… Read more »

“I have one job and one job only – I shovel and I shovel well.”\ I think it’s ridiculous in the usual DC and Marvel universes that heroes end up with useful combinations of powers vs. just some odd power that is perhaps super in some way, but is otherwise not that handy. Ethan’s power kind of fits with the sort of world where people can manifest powers of varying natures and levels of power but they aren’t gauranteed the power will be hugely powerful. Ethan’s potential immortality to me seems more like a curse than a boon. I can… Read more »

Comments seem to be missing the point bringing up tech in medicine and transportation. He’s pretty clearly zeroing on things like social media and gaming.

Beginning to think the worst thing you could do to this one is make him Live in the world he desires.

Gonna be real hard watching or producing anime without technology, my dude.

This guy’s attitude feels like a strawman position. There’s real points and good points to be made in the direction he’s arguing in, but he barely names them and does so in an incoherent framing that doesn’t let them contribute to his overall case, all the while focusing attention on details which are readily interpreted as an overarching emotional overreaction.

It’s like when you have two people arguing on the internet, and you ask the first to tell you what the second one is trying to say, by drawing a comic about them explaining it themselves.

Are we sure this isn’t all happening in his mom’s basement?

how many pages until his mother calls him up from the basement for dinner?

This villain is too illogical. He hates technology, so he creates advance AI that if he could lose control of. All it would take is that one robot finding out how to get his daily codes. I guess I this villain just pisses me off because of how awful he is.

So is it only me that reads the masters dialog in the voice of Cleveland jr?

What a guy… he plans to drag humanity into a better world, where more people will die without the machines, basically turning him into a mass murderer.. that will surely end well.
While I get where his frustration comes from, every human with half a braincell would know how much good happened to mankind because of machines and inventions.

am I like super lucky? I never had to go through the red ring on my 360