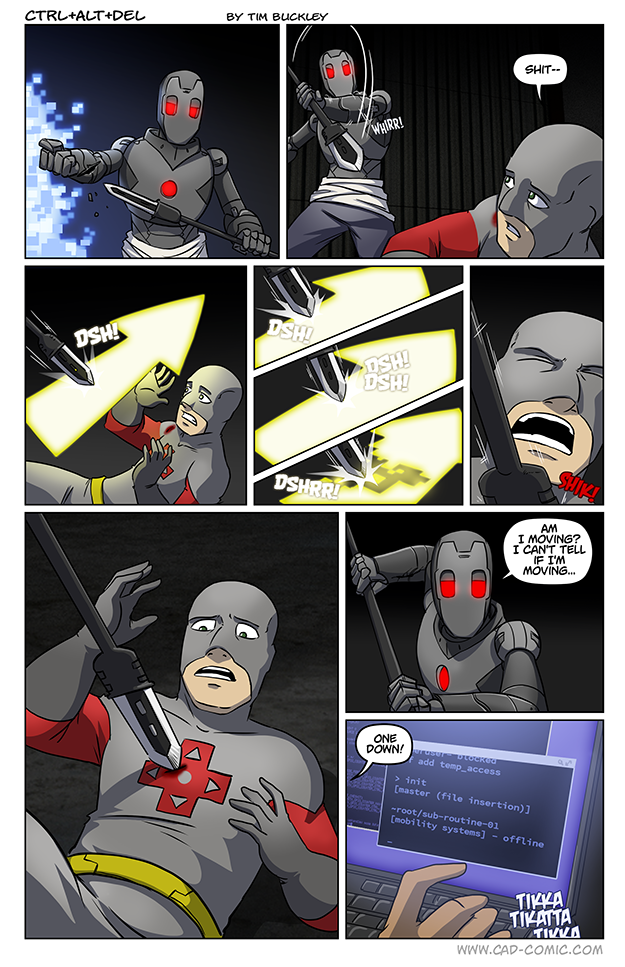 Nice. First time being first and a good progression

Hmm this has me curious about something I hadn’t thought of before. Do the ‘arrows’ absorb a certain number of hits, like Phaseshift Armor, or is it a certain amount of impact/damage they absorb before poofing? Given what we’ve seen so far it could be either *dead tilt*

Either way, can’t wait to see how things play out from here, who is the better programmer and who is the faster typist lol
Also, FIRST!

I have gotten the impression that they are directly attributed to Lucas’s mental capabilities. This case might be his exhaustion and already wounded body is taking a toll on him, so his arrows are at a diminished strength. Just my 2 cents though.

Have to keep in mind how strong that weapon is too. It was able to chunk out a good piece of the container holding Ethan, And Ethan was able to use it to straight up peirce through Zekes arm.

Where’s Player 5 who rolled the Nat 20 on his hack attempt?
This sort of thing can tend to happen in Cyberpunk games with a good hacker along.

Holy crap, man, Scott is kind of a badass.

Give the man a Gundam already!

He’s the wingman they deserve AND need right now😎

Zeke being an xbox, wouldn’t it make more sense if the command line stuff was in PowerShell and not in what looks to be Linux? Microsoft doesn’t really have a concept for root…

well it kinda sorta can i think, Powershell Core (or Powershell version 6+ if you prefer) is cross-platform. you might not see “root” per-say in windows, but a number of Linux commands can work on windows Powershell, such as LS will work in-lieu of DIR. you can see (if i recall correctly) root and other Linux commands if you run Powershell Core in linux. Also, since you are correct in root not really being a thing (as stated in comic) in windows; in this case root looks appears to be used as a directory change. that said the “~root” part… Read more »

Both Python and C++, which are the most commonly used for robotics programming, have a concept for “root.” Powershell is a scripting language and not really capable of making alterations like what you’re seeing.

in regards to the first sentence; i learned something new, thanks.
as for powershell, yeah i agree, especially with that if statement.
from the eyes of a powershell user, that line with master looks like someone is trying to use a function as a key to a hashmap/object, so yeah definitely not powershell. 😛

Given that the entire Red Ring group was built because of a vendetta against Microsoft’s stuff always failing, maybe Zeke wasn’t actually built from an XBOX in this version. That would be too unreliable. He’s just a mocking reference to one.

If it’s an remote exploit, it can be written in any language capable of forging network packets or working as a client. Powershell would most likely be used for local privilege escalation, i.e. becoming (local) administrator on a win box.

*incoming troll comment(read to end)* Uhmmm actually, that doesn’t look like any programming language in existence. looks like a mathematical function in an IF statement, while possible in most cases, isn’t really practiced. the [ ] brackets are generally used to denote a key in a hashmap (or similar collection) and is next to something, like zeke[“molbility systems”]=”offline” and one more th…. (ok i am done nerding out) **ACTUAL COMMENT** Just being funny/critical of how programming is portrayed in media in general. also looks like Scott is running linux, Tim, you missed an opportunity to cameo the penguin as Scott’s… Read more »

For shame. I can’t believe that the comic in which two kids get superpowers by radioactive goo falling on an arcade cabinet and now fight sentient robot XBox One ninjas has a fictional programming language.

Look, I have three options here.

A) Create a movie-esque “hacking” GUI with progress bars and other elements we all know aren’t representative of what real coding looks like.
B) Learn to program a sentient robot so that I can also learn specifically how to hack said sentient robot.
C) Show something that is reality-adjacent that says true to the spirit of the idea while also getting the point across to the reader.

A and B don’t really appeal to me 😉

I like B. But I suppose you’re a bit short on the decades (minimum) required to do that just to make a comic slightly more realistic.

Or you could just call up S̶k̶y̶n̶e̶t̶ Tesla and ask what they’re using in their current model D̶e̶c̶e̶p̶t̶i̶c̶o̶n̶s̶ Cybertrucks.

I can accept it as is. My thoughts are, screw the original XBox OS, it’s either wiped out, or modified heavily enough to become a hypervisor. Now everything else is either a VM or container. Each subsystem is VM/container running on or based off the linux kernel.

There, now everyone should be happy.

I find it pretty acurate. It looks like Scott use commands in some sort of CLI in a terminal, which I think makes more sense than actual code instructions which would at least need a reboot of Zeke. That is how I would code my AI, with a CLI for quick debug interactions. And that is how I would lose my AI, someone hacking my CLI x).

you forgot a 4th option, ask your patreon community for a suggestion of what that hacking could look like on screen.
unless you did that already, then nvm, i haven’t been able to do the patreon thing for a while.

all jokes aside, your option C is definitely much better than option A.
i honestly thought it looked good enough to get the point across like you said.

agreed, lot of nerds here for sure, you can get some good tips 😉 anyway it can’t be worst than Swordfish ^^

damn it do the B that’s what we ALL want here. I can pay for the xbox if you promise to build a sentient robot from it.

Guess I’m too late to tease you about going Jurassic Park hacking on us.

Lucas should learn the value of parrying as opposed to blocking.

my thoughts exactly: almost every engagement he’s in, he uses his arrows to block, but as a shield, a smooth, flat shield, they make excellent parry tools, specially when he has more of them and their all able to be used offensively. I feel like we need to get Shadversity on his ass for poor “arrowmanship” or somethingXD

Altho, some things might be safer to block, than parry.
This spear, in this case parry would have been something.

generaly unless your only angle to parry would still result in the blow hiting something you planed to protect your always better off deflecting. If your blocking with a flat plane perpendicular to the attack you have to counter with equal force as the attack to stop it. If instead you hold your shield at an angle so the attack glances off it takes significantly less than half the force of the blow to redirect it.

Honestly, his usage of arrows in this fight (with the exception of the one Zeke aborts by bashing his head against the ground) makes me wonder if he’s under the impression that Zeke is arrow-proof. It’s all blocks and holds. I guess it could be argued that duress makes it hard to cast arrows.

Thing is, while he’s had a ton of training and practice, it’s mostly as a long-distance fighter. Lucas usually is extremely mobile and is most deadly at a distance. He’s shown SOME up-close fighting, but likely flat blocks have worked just fine for him in the past, and it’s not exactly like he has someone of Zeke’s caliber to spar against.

This is clearly the most intense, dangerous situation he’s ever been in; he’s injured, lost blood, and tired. I don’t blame him one bit for not thinking, “Hey, maybe I should parry, not block.”

Cutting it a bit close.

How dare you beat me to it😈!

Hate to say it but the robot was lunging forward and downward. It wouldn’t stop if it’s mobility system was shutdown instead of ordered to stop. Gravity and inertia work.

You’re assuming idle = loose. It makes more sense for a motor shutdown to lock everything in place to prevent the machine from falling over.

Indeed. When [most] servos get no command, they simply do not move. It actually takes a sustained command for [most of] them to go into “neutral” and free-spin.

If Zeke had over-committed and leaned past his balance point, then yeah, gravity would have toppled him forward (and the spear into Lucas). But Zeke is a decent CQ fighter who keeps a good hold on his balance (I’d imagine he is heavy enough that this is very important to functional locomotion). So stopping commands to the servos would be the equivalent of yelling “red light”.

Wait …. I thought Ethan respawned instantly. Shouldn’t he be right behind Not-Zeke trying to take the spear or tackle him?

Instantly on death, he still had to bleed out.

Also, respawns at his last healthy state, where ever that happens to be at this time.

It would still take more than zero.
And he can be anywhere.
And he has to get his bearing.
AND “think” of how to stop Zeke, who has planned floors ahead of him.

So maybe it takes a bit😑?

Second to last panel is missing the battle damage on the forearm.

a glitch in the matrix.

*cat walks past twice* I don’t know what you’re talking about. Definitely damage there. (I presume it has now been fixed since it is there)

For a second I thought Zeke had pierced through three arrows rather than slowly breaking through one.

Which might be a good option for Lucas in the future, maybe? Set up a wall of arrows for incoming attacks? Depends how durable they are on defence.

It may be a single arrow with all of his focus is better than two arrows at half strength with his focus divided?

Indeed. Or he can learn to parry.
And in case somebody says it won’t work all the time, imagin lining up those arrows sidewise with the edge of the upper one touching the surface of next. That would save him AND create a great opening.
Makes you wonder…

Where did the hole on NinjaZeke’s right arm go in the second-to-last panel? He had a hole punched clean through it..

Never mind.. Apparently it has been added now.

Arms down; heads up 😎