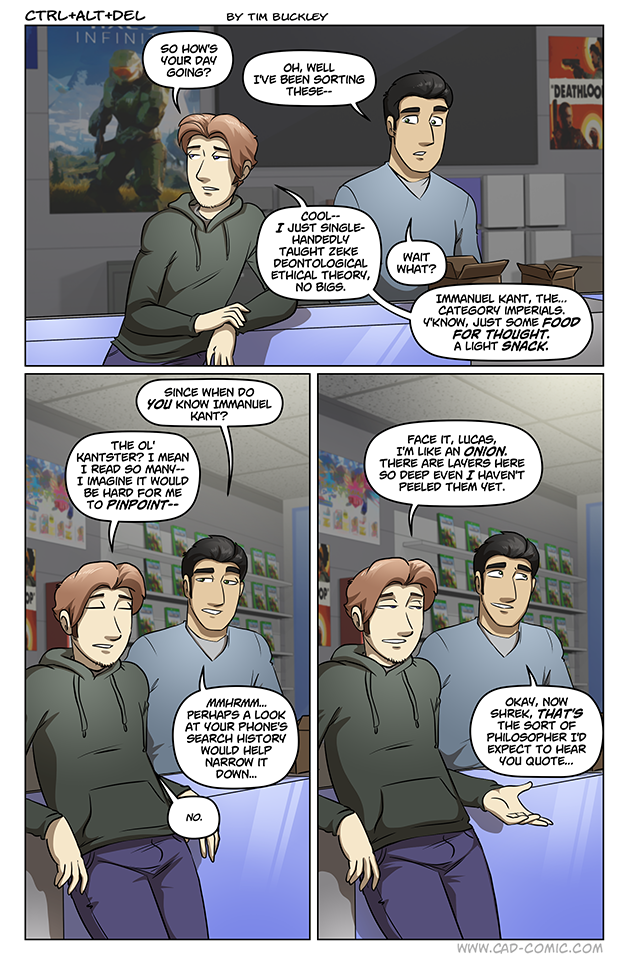 somebody once told me
STEALING PANTS IS BAD

Deep, but it’s nonsense all the way down?

I’d say more like creme brulee. Once you broke through the outer crust, it’s all the same

What about Pizza? It’s only two layers at most, and everything’s on display.

I love that all your responses just… don’t get your references.

It’s about shrek and donkey’s “onion” and “cake” speech, I think.
Except this is a bit too meta🙄

At the end of the conversation Donkey says that Orcs should be like Parfaits, because nobody has ever said that they don’t like parfaits.

Ogre, not Orc. Ogres have layers, orcs just have dakka

This is also a reference
Reply to  grizz kid

Yes all of these other commenters have really put their foot in it.

Is it against the rules to riff off a reference for some other purpose? We’re all improv comics here.

Okay lucas, since when did You know about Immanuel Kent?

Not with that attitude

Lucas must have watched The Good Place.

just cause he doesnt have some weird name and most of the populous has no idea who he is doesnt make shrek any less valuable.

Shrek is not a weird name?

I don’t disagree with your general point, but you have to admit that “Shrek” is a weird name.

wise beyond his ears.

On the next episode of Analog + D-Pad: ZK starts mining Bitcoin and blacks out the entire city block!

unlikely. at no point can i recall having seen him tethered to a wall socket. He likely has a Significantly Powerful internal power source to survive long term without the exploitable weakness of needing the grid to juice his batteries…
That aside, the very nature of block chain functionality would put a spotlight on Zeke. It wouldn’t tell the world WHO was mining the currency specifically, but it would make it quite obvious that a Huge new power player had entered the mining game….

All I’ve read from “Critique of Pure Reason” came from comics.

Why do most people argue about philosophical matters? That’s right. For smugness and bragging rights. I love this about Ethan. Even when he’s doing an EXTREMELY typical kind of dumb, he makes it sound funny instead of insufferable. Must be because he doesn’t take himself too seriously. Unlike those hordes of people around, that pretend to be debating pros and don’t know what fallacies are. While they keep falling into them. And also acting positively allergic to admitting mistakes. (No, I’m not a debating pro. I’m just above average. And yes, the average is sadly pathetic. And yes, my ego… Read more »

The Rolling Stones understood. Hence “You Kant, always get what you want.”

Immanuel Kant was a real pissant Who was very rarely stable. Heidegger, Heidegger was a boozy beggar Who could think you under the table. David Hume could out-consume Wilhelm Freidrich Hegel, And Wittgenstein was a beery swine Who was just as schloshed as Schlegel. There’s nothing Nietzsche couldn’t teach ya’ ‘Bout the raising of the wrist. SOCRATES, HIMSELF, WAS PERMANENTLY PISSED… John Stuart Mill, of his own free will, On half a pint of shandy was particularly ill. Plato, they say, could stick it away; Half a crate of whiskey every day. Aristotle, Aristotle was a bugger for the bottle,… Read more »

Want to make a punny remark about cake, but brain is too busted to try.
Baton pass.

You are having issues because the cake is a lie.