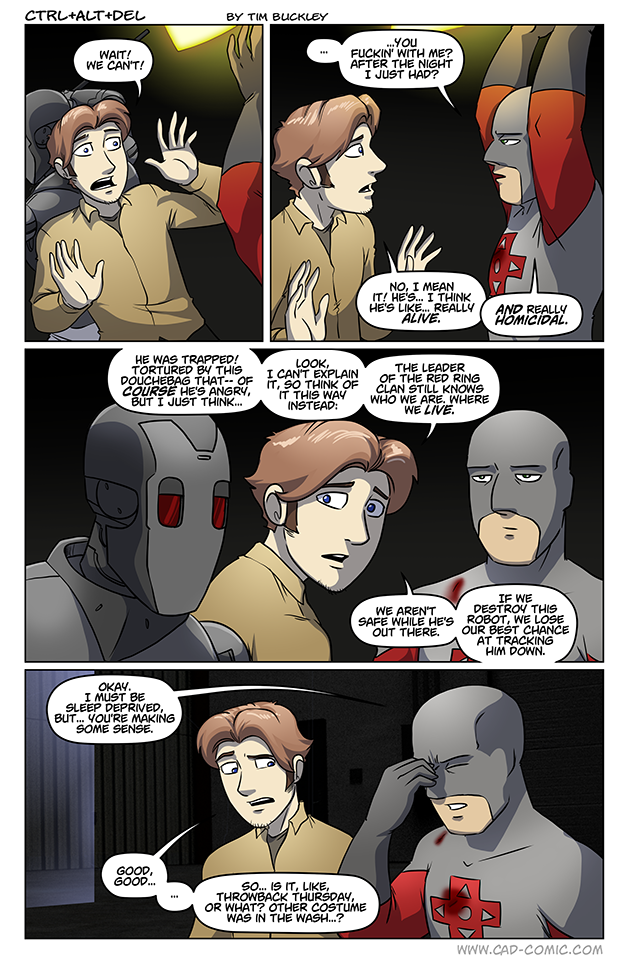 When i learned one thing in all my Games:
Kill it as long as you can. Later its maybe to late..
Therefore
i just would go like “a screw it.. *blam*”

The rAt
Reply to  Vinc

If i learned something from all my Games:
There will always be time to kill, but you can’t return quests, denied with the death of key character

Rereading this a year later, where Baldur’s Gate III has the Speak with Dead spell.

And Scott’s going to fix him up and we get green Zeke back!

He even can kill ethan as much as he wants now.

Why does everyone assume that this is Zeke and not a killing machine? (Bearing in mind that the original Zeke had homicidal tendencies, too.) This is a completely different universe where Lilah is not Ethan’s girlfriend, where Scott is not a sociopath with a homicidal penguin pet (or was it the other way around?) and other changes. There’s no way to tell if the robot is sentient or if it is just programmed that way as a contingency (so it can evoke pity if cornered). And it’s dangerous. There’s no way to guess what can contain it and seeing how… Read more »

I don’t think he was programmed “sentience” it most likely came about the same way it did in the previous universe, accidental, if it was purposeful, he could of made more robots with sentience.

I do however agree that he’s going to be dangerous, but I also feel like their trying to do SOMETHING with him and Ethan’s character, and I’d like to see how that plays out.

I’m fairly sure that the whole emp takeover battle between scott and the master implied that, while they didn’t remove the destruction device, it is no longer under the master’s control.

Lucas’ face in panel 3 is amazing. I have to assume he has that expression in his head every time Ethan… Ethans. -_-;

Lucas’ face in every panel is gold

That must have been the 15 seconds of absolute clarity Ethan gets everyday.

Not every day, after every respawn 😀

Ooh, I like this. Can we make this canon? Whenever Ethan respawns he gets a brief burst of clarity and rational, perhaps due to brushing up against whatever comes after the respawns run out for him and death happens the first time for the rest of us?

You assume the respawns run out. I like to think it’s more like when you play timed games with cheat codes on, so when you “die” it doesn’t stick, unless the timer runs out. He’s not immortal, just doesn’t stay dead. I expect natural causes/old age can still get him. Other than that, he respawns to his last healthy state.

Could you imagine, infinite respawns and when he dies each time, he sees Death giving him the finger? Or just a “sup?” head nod.

Or he falls in love with Lady Death ala Deadpool

Let’s enjoy it while we can folks, it doesn’t last long.

I, for one, cannot wait to see what Lucas’ normally perfectly-styled hair looks like when he finally takes that hood off. I have a feeling that’s why this is ‘the old costume’.

Props to Tim for finding a way to throw in a little more backstory. Was this one of the original designs when you were developing A&D after CAD1.0, or just something that you thought would be cool for this arc?

I wanna take a minute to muse about the ethics here, taking as a given that Zeke is ‘really alive,’ as Ethan states it. IIRC, Zeke’s body count is nil. Not for lack of trying, obviously, but as Weeb’s stated goals are not to hurt people with a few exceptions, killing people would be against his master’s orders. He is, though, guilty of countless attempted murders, though as he is literally a slave with a gun to his head, self-defense is an argument. Sure, Zeke takes pleasure in his actions. He’s a picture of an abuse victim, not able to… Read more »

I guess since Ethan comes back each time it balances out, but Zeke did just “trigger a respawn” on Ethan (Though he knew the outcome of that too, so it’s less murder and more gleeful violence)

That aside, all solid points.

I’m secretly hoping for some kind of C-list super team-up. If Zeke is released to find himself, maybe he comes back to join up Justice League style with others like Sam and Elijah, and even Alex if he reforms as well. Pretty far-fetched, yes, but a fanboy can dream…

This. sooooo much. While i still want to for Ethan and Lucas to be the defacto main cast, Tim should really consider making them join forces with Sam, Elijah and Zeke.
Have Scott become their Tony Stark type as well. Alternately have young Super people in Sams age bracket seek out our heroes for mentorship. Honestly, imagine youre a teen nerd and gamer and then suddenly you gain super powers. would you go to the super strict captain prime or would you try find the guys who openly wear their nerdness with pride?

I also secretly hope Scott falls into even more of a Barbara Gordon/Oracle-type role. I already feel some parallels there, but having grown up more a Marvel fan than DC, I’m certain I’m missing an awful lot in the translation.

I really love the comparisons between Ethan and Lucas that this whole encounter has made even more apparent. Lucas has powered fighting ability and is better built, but he’s ultimately much more fragile because he can actually be injured and it has lasting consequences. Ethan has to rely on tricks and gadgets, but getting injured means very little to him. It’s not great for his mind in the long-term, but he IS Ethan so he’s got some buffer against it.

Mr. Buckley: I have to admit that at first I was disappointed by the new format of your comics following the end of the CTRL+ALT+DEL main story (back in 2012 I believe). I have been reading your comics since 2005, and have pleasantly watched your art, stories, and website/business develop and grow. I don’t always handle change (or endings) well, and so I ended up giving up on checking back on your comics until just about a few weeks ago (not to mention I ended up not having time I needed with 3 kids back to back. Fatherhood, right?) I… Read more »

There’re a lot of 1.0 lines recently.