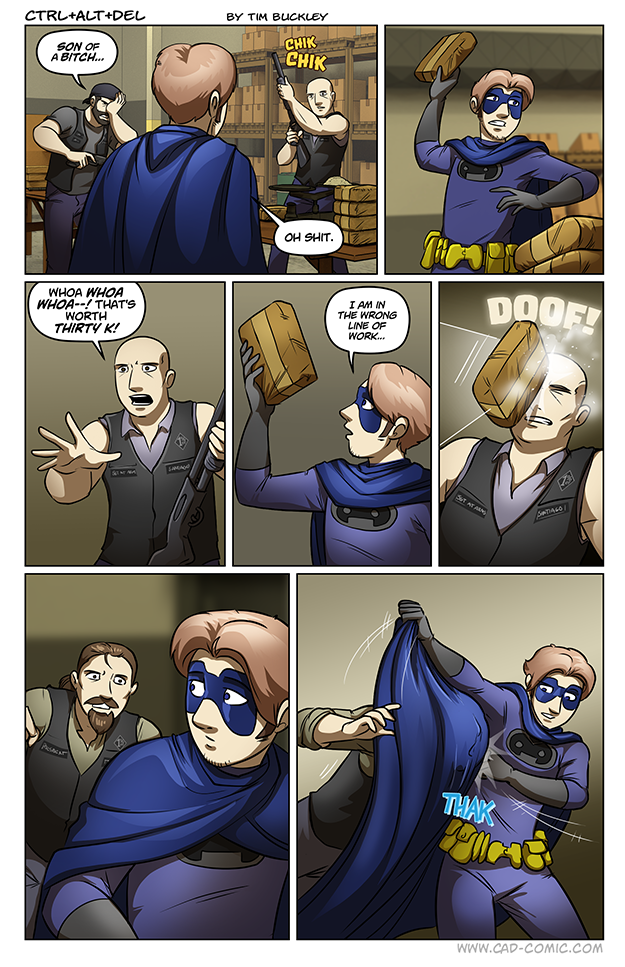 dont worry, next comic he’s going to be crowing about how a cape showed its usefulness and he was right all along, not noticing the guy that sneaks up and *knocks him out* and ties him up while out cold.

Wait, have you seen the next comic early, or is that a guess?

It’s as I said in the previous strip. Thanks to his goofiness and antics, plus the memory of Ethan 1.0, we often forget he’s actually supposed to be a decently skilled fighter. He has to be, for Lucas and him to have lasted in this business

I personally enjoy how Tim uses that, to keep surprising us.

Please correct me if I’m wrong, but I think this is the first time we have seen this level of competence. All the other fights I remember Lucas was the one getting stuff done.

You may be right. In any case, it’s more like it’s implied. Lucas is the better equipped for actual fighting, but it’s clear they both have to be at least sort of competent. Or Lucas would be crippled or dead. They do often face dangerous, armed criminals who often have fighting experience. Not to mention, a few deadlier goons like the master’s mindless robots. I believe we’re often spoiled. Most superheroes we see in action, are usually either world-class fighters or downright superhumanly good. So, when a super like Ethan doesn’t show Batman-esque skills, we tend to underestimate them maybe?… Read more »

When I look at the final 2 panels I find myself wondering: did Albie (who, I’m sure, has grown very attached to Analog, what with all that quality time they spent together) willingly ditch his gun to try and incapacitate Ethan without deadly force, or did he just run out of ammo? If the former – that would definitely put his intellect above the average goon level. He also showed some level of initiative in the beginning of the story. Look, all I’m saying is: if anyone in the Sun Devils deserves a bit of a raise – that’s my… Read more »

Albie dropped his gun, when Ethan kicked him in the face, and Albie was probably more concerned about getting Ethan away from the highly lucrative merchandise as fast as possible than whether to use lethal force or not — he would’ve had to look for the gun, rush to pick it up and possibly lose several seconds compared to just rushing to tackle Ethan.

Not only that, if they kill Ethan with a gun, he’ll just reappear elsewhere, so they’ll have to restrain him instead.

Keep in mind that they don‘t know that for sure. All they have seen so far is his body disappearing and him reappearing healthy after being shot. They don‘t know if he may also be able to trigger his „healing teleports“ at will.
Their safest bet might be to knock him out cold, although they can‘t be sure if that wouldn‘t trigger his ability, either.

Or more likely he will think about all this later and off cause then it will have been the reason, but now he does whatever he can.

We know Ethan did that.
Note they thought the first shot must have been a graze because he was still moving. Then he was gone and crouched on a table behind them and began his counter attack.

From what they know is he is a wiseass super of unknown ability.
Hence not afraid of their guns.

But in the first panel of this one he’s holding the gun.

That Other Guy
Reply to  Marc

Wrong goon. Check the beards. The guy in panel one isn’t albie, it’s the guy that got hit with the controller

Makes sense. Also, maybe he’s just thinking “guns don’t work on him, maybe if I punch him or strangle him.” In any case, it does show he’s using his brain like you said.

With all that 30k worth of drugs, they are all going soon to be high af. lol

That trick with the cape was surprisingly clever, especially for Ethan.

Case and point: when the original Ethan created original Zeke.

I vote for a reappearance of the Sun Devils and some reference to their ancient past, in future Starcaster issues. Who’s with me?

Or maybe the Starcaster story is a famous comic book/TV show/movie saga in this fictional universe?

I know it’s kinda famous in OURS, but I meant as a bigger phenomenon.

So, when is Zeke going to reveal himself as the druglord kingpin he is?

I just realized… is he fighting the main characters from Days Gone?

The Adventures of Batman: Any quality cape should be equipped with a quick release.

I believe when adrenaline hits him, like real “Flight or fight” stuff, it actually engages his gamer instincts, and his brain goes into “optimal mode” for the duration of the need. Thus why he’s good in fights, and not so good in day to day life!

honestly with this ability to respawn with whatever hes wearing he would make one hell of a mule/smuggler.

This has got be zekes operation. Gonna break his heart

Ooohhhh, that’s what capes are for….

That 30K is also tax free. Now imagine how much the government could take from that if they’d only legalize drugs.

You know, at some point, you’d think the bad guys would stop killing him and just break his back. Can’t move but also can’t come back to life.

That goon saying “Whoa, don’t throw that, that’s worth 30K!”
Um, EXCUSE YOU, you’ve killed me TWICE now, you think I’m going to do you a FAVOUR?