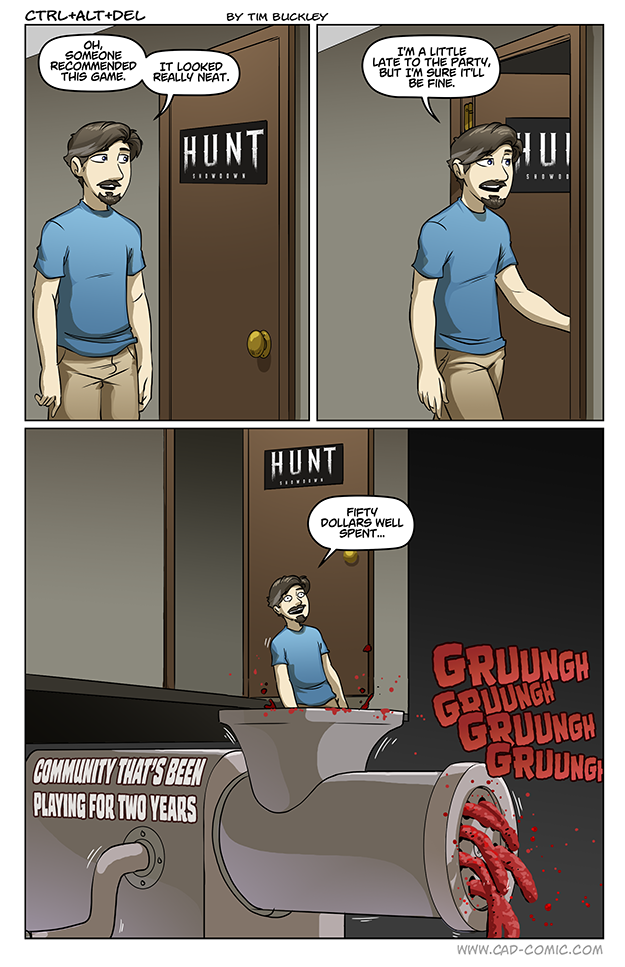 I’m still working through my Steam wishlist a bit at a time, either deleting titles for whom my interest has cooled, or finally trying to play some of the games that have languished there for ages. And man, jumping into a competitive and highly-mechanics-oriented game like Hunt: Showdown way late in the game’s life-cycle is a rude awakening.

There are a handful of skills that translate from most other competitive shooters, but most of Hunt feels like such a vastly different beast that I probably played half a dozen games before it even clicked for me that I needed to alter (and slow the fuck down) my entire approach to the matches. To rethink what I was even supposed to be doing. And even then I was nothing more than lukewarm chum for the game’s more experienced hunters.

I love the concept of the game, of hunters that level up but can also be permanantly lost, of playing a game of cat and mouse mixed with PvE elements, the creepy bayou setting, and don’t even get me started on the music, which I would happily sit and listen to all day. At the same time, I find the game thoroughly nerve-wracking. Being mindful of so many things at once, like walking on glass (literally), flocks of crows, ugly Cthulhu monsters in the swamp, zombies that spit angry bees at you, tracking down clues to your next prey, other Hunters that always seem to have the better position, and every sound in the game that makes me want to jump out of my skin… it’s all a bit much. When I was playing the game, I was relieved when I stopped. A short while later I was itching to try again, to try and learn this magnificent amalgamation of a game.

It was definitely a very interesting and very cool game, which made it a very difficult decision to refund it at the 2 hour mark. Clearly that’s not enough time to truly learn the ropes of a game like Hunt, but it was either that or be committed to the investment for a long haul. While I didn’t hate the idea, I have so many other games I want to play, and I’m just not sure I can to commit the time it would take to actually become at all competant in Hunt. If I see it go on sale, though, I’d definitely consider picking it up again just to have in the library for when the mood grabs me.

I think the name on the door for the last frame could be so many other PvP games out there, whether FPS or MMO/RPGs, especially the latter. A new player after the game has been around for a significant time is rarely welcome in the key major guilds/clans/(pick a term) and is usually targeted to be farmed and crushed when they struggle to a high enough level to be “worth it”. At least most of them are free as long as you can resist the micro transactions, so abandoning the game after a few weeks is no real loss except… Read more »

Not gonna lie, panel 3 is making me gag.

Wow, it’s like the old execution scene from Fievel Goes West…creeps me out just as much now as it did back then.

I honestly think, as I’ve gotten older(34 here), I’ve kinda fallen away from really competitive multiplayer games for this exact reason. I’ve got work to do, a wife to take care of and tons of responsibilities. I just don’t have the time to really get involved in these kind of games and, even if I did, I’d only get mocked by some pubescent squeakers on summer break. I’ve noticed that the best games for me for the past few years have been gems like Witcher 3, Subnautica, Prey and Deus Ex. Single-player games that are immersive, enjoyable and, most importantly… Read more »

Agreed. The biggest requirements for me these days is “can I walk away from it at any time with no penalty” and “I’m in a better mood after I’m done playing.” Family adds a layer that puts honing competitive skills on the back burner.

I’m sorry, I must have misheard something. Cause it sounded to me like someone said “zombies that spit ANGRY BEES at you”. But that can’t be right, CAN it? Otherwise, I know exactly which game I’m NOT playing. Ever.

Don’t forget the big fleshy dudes that are blind but hunt you down with literally leeches. Oh, and if you get poisoned, they can track you down for as long as the poison lasts!

Fun fact! Meatheads in hunt showdown are actually created when pregnant women are corrupted! not sure where the leeches come in though.maybe its saying children are leeches o-o

Well, you’re in luck, they don’t spit bees at you, the bees crawl out of a nest they built in the zombie’s chest cavity. Does that help?

Hunt Showdown Or as i like to call it: “Your teammate has left the party” But seriously, i’ve never played a game quite like Hunt, where its almost encouraged to leave your teammate to die if need be. 99% of the time if they die in a place you can’t rez them/mount a counter attack, its probably their fault they messed up and died anyway. Throwing yourself at an almost guaranteed death is so much less ideal than either waiting and hoping the enemies leave, or just taking a huge slow 15 minute flank method. But alas, that’s the thing… Read more »

If you enjoyed those elements I’d urge you to try out Escape from Tarkov at some point as well. It hits a lot of those same feelings but in a completely different way.

EFT has a massively larger commitment to “understand” the game thou. The mechanics are deep, and consequently the stuff you have to learn is also deep, and requires a lot more hours to squeeze enjoyment out of it.

Hunt is often called “EFT casual” for a reason…

Honestly I was excited until “Permanent Death” was included.

Realistically a hunter is maxed out on useful abilities after 1-2 games, and hits the actual cap at 3-5 games. They’re meant to be disposable.

Your hunters die, but you still have account progress that plays the main role. Gear is relatively cheap. Perks mandatory for you planned build can be leveled after a single game. Hunter’s permadeath is the only thing keeping risk-reward system alive, so people actually think before engaging.

Its not quite as rough as it sounds. You can literally never run out of gear due to a free ‘loadout’ given between rounds, and the character level cap is reached in maybe 5-6 successful runs, even as few as 4 if they’re good runs.

Jesus christ, is there anything you don’t just whine about? “wah, there are too many games! Wah, my wife won’t let me manipulate her! Wah, I’m not good at games with out practising! Wah wah wah!”

look, a whine about a whine… why do you keep going here?

Hardly whining; It’s commentary, done humorously with a comic. I don’t see Tim ever really raging against games in particular, nor their audiences; Just commentates on his perspective while respecting those who play the game, regardless of whether he likes the game or not. EG He recently commentated on how Animal Crossing looks boring to him, but he acknowledged that he hasn’t actually played the game, and gave benefit of the doubt to those who do enjoy it. And in regards to today’s game, he did in fact say he has too many games and insufficient time in his life… Read more »

Playing on console could be a decent alternative. It was on sale 3 weeks ago and myself and a few others I’m sure picked it up. Probably some new blood in the water there. Plus, I feel like you really need to partner up with someone you know instead of a random person online. Took a few weeks (playing meager hours a few times a week) to feel comfortable in matches but I’m there now.

My feelings exactly when I tried getting into Destiny—2 that is. I finally caved in and tried out the Destiny series…..but I started on number 2 because that’s what my friends were playing. Bad move. I was as lost as Bo Peeps sheep for the first few days…but thankfully my friends were cool about it and they tutored me through it. Most of us aren’t that lucky of course….

Honestly, Destiny is so much of a mess you’d probably not get much from playing the first game first, either.
Has taken literally 6 years for them to even touch on the vanilla D1’s story again, with the upcoming expansion.

Its a nice PvPvE game. Finally found myself some good shooter that is not Battle Royal. It requires learning and skills, but you can get a basic understanding in a few days, after that your QoL will improve a lot. Overall the game mechanic is genius IMO. Setting also fills fresh. PvP and PvE parts are combined well. A filthy cursed gemstone in my collection!

As one of those people who started playing Hunt literally the moment it became possible to: Sorry not sorry you got put through the meat grinder. I do not say this out of malice, only in solidarity that we all got put through it. There’s no other game like it, and I can absolutely understand not wanting to invest the time needed to learn the in’s and out’s of the game when there’s a lot else to be sampled on your wishlist. That being said, it is absolutely not the same game now that it began as, and it drove… Read more »

I cant edit my other comment, but i just remembered that i wanted to say that a detail in Hunt i didn’t expect to see (given how often you don’t see it in other games, even when you’d expect to) is that if you fire an unsuppressed weapon too many times in a row too quickly, itll actually deafen your characters hearing for a short time. Its an interesting idea.

This is how I feel about most Call of Duty games.