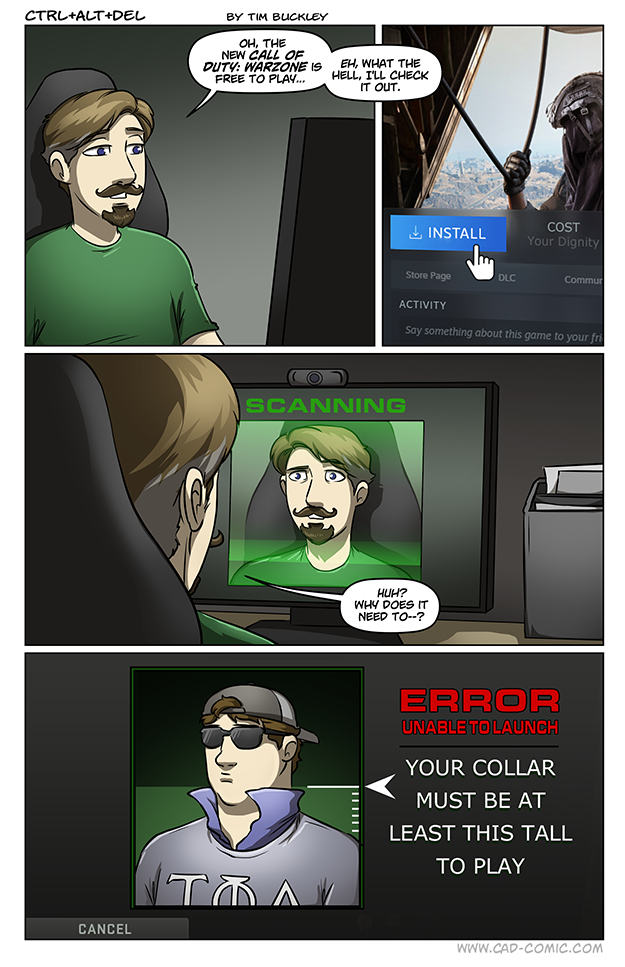 The last Call of Duty game I played was Modern Warfare 2. The one back in 2009. It was a AAA series back then, but obviously in the last 13 years of constant releases, CoD has become a gaming franchise juggernaut (one I’m happy to observe from the sidelines). It has also cultivated a reputation (at least from this outsider’s perspective) as something of a bro-shooter, accompanying frat toxicity and all.

Jokes about the game’s demographic aside, though, I actually had some fun with the new Warzone DMZ mode this weekend, which is free to play. Whereas previously CoD aped the Battle Royal trend that other games had started (and that is still here as well, it seems), now they’ve taken aim at the extraction shooter genre, which again, other games have done previously (and better). DMZ is like Tarkov-lite, a local arcade port of the more hardcore extraction game.

But, that faster and more “gamey” run and gun style is fun in its own right, with less stakes (and sting) than a real extraction game. As janky as it was, there was a lot to like about the mode. I doubt I’ll stick with it long term like I have with Hunt, but for the cover price, I’ve found it to be an entertaining palate cleanse in-between bouts of slaughtering the hordes in Darktide.

I miss Medal of Honour.

Used to play Medal of Honour multiplayer on the playstation one with the brother. Janky as hell but worth it.
I still play some older CoD’s, but whenever I read about later ones there’s nothing new in there worth paying for, not even interestingly made maps. Like, if you’re barely gonna change mechanics (which, fair enough, its a shooter game not much to change) at least design interesting maps.

Toxicity rivaling that of the MOBA gamers *shudders*

The Legacy
Reply to  MasterofBalance

A friend of mine said that Rainbow Six Siege players are worse than the ones on League of Legends. I tend to agree.

I haven’t played a Call of Duty in over 20 years, so I can’t comment on a specifically, but I’m sure it’s pretty close to that if not worse.

Treiden
Reply to  The Legacy

Pretty impressive feat considering the first one came out in 2003

The situation in MOBAs really sucks… In theory, I do like the concept. And playing with friends only is kinda cool. But playing online is so terrible, I stopped LoL at around level 10.

i used to play blizzards moba, but now that you cant even report the shit people put in chat i said never again. havent even opened the blizzard launcher since.

People keep talking about CoD multiplayer… and here I’ve always played CoD for their singleplayer campaigns. I’ve never felt the need to. For my multiplayer itch there were first the Unreal Tournament games then Team Fortress 2 and now Overwatch.

Tbh, the main power CoD multiplayer has these days is the brainlessness of it. There’s unfortunately not a lot of options in that department these days, with every shooter seemingly hoping they’re the next esports shine, assuming they’re not just a BR anyway.
Halo Infinite could have brought back some more variety if they hadn’t royally cocked it up.

Even then the developers know who they’re pandering to.

I had to uninstall Battlefield: Hard Line after I came away with the conclusion I could just watch The Shield instead.

I miss Unreal Tournament 99.
Or do i miss the 90s? We will never know!

Ah, the first sweet taste of the simple joys of ragdoll physics.

I loved UT. Ended up dropping out of it when they did a bait and switch promising a 4th game in the franchise in 07 only to launch Unreal Championship 3 with cross play instead.

Oh come on, it was considered a bro shooter with frat toxicity, back when the first Call of Duty Modern Warfare released, and it was definitely hammered in by the time Modern Warfare 2 released.

I know this, because that was one of the main reasons why I avoided the franchise for so long.

Face it man, you were once one of those frat bros.

Pssst.
There were CoDs before Modern Warfare.

Panel 2: That currency is in short supply.

HAH! I didn’t even notice that subtle jab until you mentioned it! That’s hilarious. 😂

If you look at the CoD streamers with 10 millions subscribers, it’s a constant slurry of insults with half of the discussions being the F word or the S word with sponsors of various very male-centric companies.

Mind you, it was about the same playing Planetside in 2002, but you had to type your F and S words which kept civility around in 98% of the cases.

I really, really like the toxicity. It makes me feel at home. I grew up unsupervised on 4chan, hiding from the world with other unsocializable loners as my parents fought outside my door. At the end of the day, it’s just a bunch of powerless kids like I was trying to find some control in their world. A lot of hot air might make you feel uncomfortable, but it’s not gonna make you sick. Videogames don’t cause violence – spamming various racial slurs online doesn’t either.

Tell that to the families of the dead folks in Colorado Springs.

I thought we all figured out that video games do not cause violence… well, except the Wii-mote, but that’s why Nintendo approached the Switch with much smaller controllers.

videogames dont cause violence, but online toxicity and hate 100% do tho. And spamming racial slurs online IS violence by itself.

If that is the case, then we really do have to look at COD’s contribution to that. By the time Black Ops came about, the single player campaign had become painfully racist. It didn’t really start to course-correct until the reception to Ghosts put Activision in the spotlight on both the community and the single-player campaign which, between 2009-2013, could be summed up as “Let’s shoot brown people”.

If a videogame is glorifying the online toxicity and hate, then the videogame is ultimately responsible for the results. It isn’t happening in a vacuum after all.

Racial slurs ARE violence tho. What the hell do you think? If you think hatefull social network are just powerless kids, you may want to think again.

Found the next generation Ken Thompson.

If Tarkov was a tad less forgiving, had a single player mode that let you actually learn the maps, and less of a cheating problem, I might go back to it. I took the gear it gave me for default and lost it ready quick in the first three matches and never managed to get anything comparable since even when jumping into a scav body. It was a disappointing $50 spent.”Git gud” is a nice response for people who have time for that – i don’t anymore.

DMZ is where I felt Tarkov was aiming for, but kept missing.

CoD MW2 lobby trash talk was notorious, NOTORIOUS I SAY. It didn’t become toxic since 2009, CoD multiplayer IS toxic. Always has been. And you know what? I just didn’t mind it back then. There was toxicity, but there was no special little word for it, and people didn’t care as much. I miss that.

Nah, early on in the franchise, “Toxic” players got chased/booted out of servers by active admins. If you were cursing, you apparently had too much time on your hand for that server. Best way to unite both sides of the field was everyone laughing at some toxic player getting kicked. And true, we used other terms back then, but the meaning is static. If you try to use chat as a weapon instead of the MP-44 in your hands, GTFO.

most of competitive multiplayer games are toxic, and that’s why I almost only play coop or solo games.

It’s pretty funny to see the cultural drift from back in the days of Battlefield 1942/COD from relatively stoic war-hero pretending squad based tactical shooters to, uh.

Well, the sort of people who embody the current Multiplayer-Shooter culture.

Or at least I don’t remember the trolls running the farm back then.

They weren’t allowed to stay, that was the difference.

I like the PvP still.. I took a massive hiatus from all the cheating I experienced when I played Advance Warfare on PS4. I still remember, a game I went into, I was at level 45, some weird thing happened, I was reset back to level 1.. I still missed the game though.. I feel you still need to grind the PvP, just mute everyone and play it to grind the gear up and get the unlocks. Several players are complaining on the SBMM, to me it actually gives me a chance to be a top player every now and… Read more »

I used to enjoy CoD for the single-player campaigns, but that pretty much grinded to a halt after the original Modern Warfare and its infamous Nuke scene.

Pretty much the point it jumped the shark and it just went downhill from there till i started jokingly calling it the gaming equivelant of a Michael Bay flick. Going in a skyscraper? Has to go KABOOM! Entering a compound? Airstrike KABOOM!! Heading to a oil-refinery? Take a single guess…

You should really try CoD Black Ops 1 and 2. My favourite is still MW3, though.

This is the first COD game I’ve actually really enjoyed getting into the multiplayer. Warzone is improved. But maaaan the toxicity is something else in those lobbies. And there’s no real simple way to report the racism coming out of that kid’s mouth either.

I will say though that Proximity Chat is both terrible and amazing in equal measure. Definitely loads of potential for more comics in there.

I haven’t noticed much toxicity, but then I turn the player audio off, first thing.

Eh, it’s because you’ve become old enough to realize that, if you strip away the old man lunacy aside, Jack Thompson really did have a few points

Really? Such as what, exactly? ’cause all I remember from Jack Thompson was how all that video game violence would translate to the real world, and it hasn’t done that… if it’s made anyone insane, it was Jack Thompson.

The toxicity may be real but the toxicity also remains in the game. That is why people here talk about how bad the toxicity in-game is rather than how people do that in real life, because in real life there’s consequences to such behaviour.

The ability to mute everyone has always been what made these games tolerable. But more importantly, the fact that CoD is one of the only franchises left that still supports local couch co-op is the reason I buy it, my son and I can play together.

For some reason, I picture cartoon Tim fitting in perfectly in the Hunt Showdown universe. Albeit dressed more Steampunk-y.
If I know Tim, it’s also like the game was made for him.