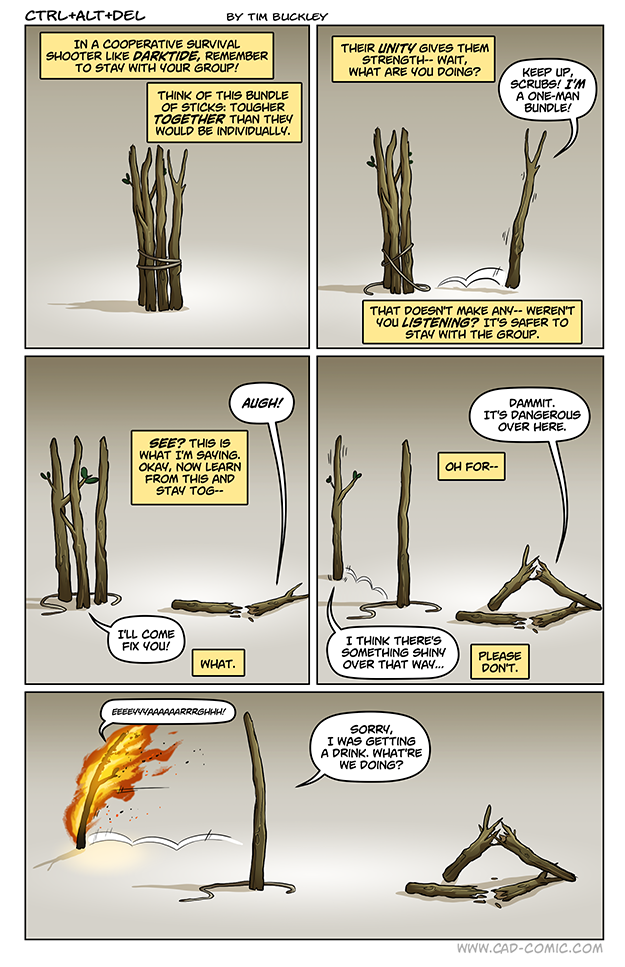 A buddy of mine just released his very first game on Steam, a physics-based puzzle platformer called Rubble. You basically blow shit up, and use the generated debris to progress through puzzle rooms, and it’s pretty neat.

Go check it out, maybe throw it on your wishlist if you think it looks neat. The Steam algorithm is a mysterious and fickle beast, so every little bit helps as a fledgling developer.

Coop survival and you should keep in the group? Oh, come on, then how are you going to boicot those “survive all” missions? Or compromise everybody survival being proned in the worst place of all the map?
You kill the fun man XD

But then he couldn’t make the pun “stick together”.

Eh, bricks would’ve been a bit too blunt.

But the sticks! Now they have a point to them.

no thanks nintendo
Reply to  Cragfast

Complaining about it? Wow, feeling a bit edgy today I guess.

The Aesop’s Fable is literally about a father teaching his sons strength in numbers with sticks XD https://read.gov/aesop/040.html

I just pictured Rise of the Planet of the Apes, Caesar speaking with Maurice

I am guessing the thing the person caught was the literal definition of “fag” being “bundle of sticks.” Which, coincidentally, is why a (pack of, then a single) cigarette is/was “a fag.” Somehow catching the etymological history but missing the fable.

Yeah, I know what they’re implying. It just requires some reaching to suggest that there is a hidden message there, or an analogy behind the analogy.

Cragfast is a bit of a shitposter here, so there’s no genuine mistake at play; they’re purposely attempting to start a controversy XD

Oh? I thought they were referring to fascism because the fasces, the symbol of (historical) fascism, was a bundle of stick, precisely because of this analogy.
(I am NOT suggesting that you were making any reference to this, just to be clear. It took seeing an outrage post to think about this possible explanation)

i thought he made several good points with his sticks. (yes its a dad pun)

Ha, went and took a look at your friend’s game. I love his video loudly proclaiming all the publishers that turned him down. That’s a classy response to an experience anyone who has spent time pitching games in the industry has had. Good luck to him!

Cory B.
Reply to  Paris

Completely agree. I love the response. I was probably going to check it out anyways, but now I definitely will just because of the sense of humor displayed in that video.

You could say that they ended up in a sticky situation.

The one from the 1 man army branch was def more bark than bite though. I woodn’t have done it. Maybe he’ll get his treevenge another day but I’ll leaf it at that 🙂

I am not sorry in the slightest.

Geez, that old chestnut… though you really went out on a limb. My frustration stems from your puns, no idea what to do about it… I’m stumped. Naught to do but lumber on, once I get to the root of my issue the solution will be in the palm of my hand.

I had hope, nay, belief, that the people who decided to preorder and immediately play Darktide on early access would be tide veterans or at least knowledgeable about these types of games. Yes, I have been called a naive optimist before.

With how common the knowledge of not trusting randos before they prove themselves, I’d say words naive and optimist are understatements.
Also clearly they are not people who know even a little bit about 40K. Solo heroes die messily, yes even the space marines and you are playing a reqular human being or Ogryn, you will die from doing stupid shit. Besides with how prevalent guns are, basic fire team tactics would do well.

Solo heroes die messily in 40K? Are we talking about how Konrad Kurze basically conquered a whole planet without a single ally? How imperial assassins go alone to murder anyone that some High Lord really hate?

My character may be “just a regular human”, but do you know who else is a regular human in 40k? Sly Marbo! And he is literally described as a one-man-army! I’m going to Leroy Jenkins this shit. *proceeds to die messily*

Ok Primarchs being exeption, my bad for exagerating it a bit.
You clearly know your stuff, but should we point out all the times the assassin got butchered afterwards, like in Vraks? And there’s nothing regular in Sly *god amongst men* Marbo.

I’m sorry Tim, but the steam page for Rubble is a hot mess. Trailer is mostly “Gotcha” complaints on who wouldn’t publish it and the description is… unique. I’ve been taught that direct comparisons to games creates bias that leads to unrealistic expectations. Case in point, no one should try to compare themselves directly to Portal and Minecraft! I wish your friend the best, and I hope they recoup their time and money for this game, but this is a hard pass from me.

I agree with you completely. The description is just… too much. The comments about publishers are also kind of cringe. It’s hard to take it seriously when even the developer doesn’t.

But, I still wishlisted it, maybe I’ll give it a try over the weekend.

There does look to be a Demo for the game at least, so that’s nice. Makes it easier to try out. I miss when demos were standard.

I tried the Rubble demo – it’s far too dark. The first couple of levels were ok (though it took me a little to see the breakable ceiling on the first one), but I could not see what I was supposed to do on “Goldberg”. It was too complex and too hard to see.

The comparison to Portal is also a bit oversold – it’s more like Narbacular Drop (the indie experiment that led to Portal). It desperately needs the touch of a professional artist, as well.

Hold on, you’re saying Darktide is a metaphor for fascism?

I mean warhammer 40k LITERALLY is all about all kinds of authoritarian or classicist systems?
Well as long as it is not about alien bugs, machinezombies or flat out demons that rip someone’s face off because that is just what they do.

I guess the Tau are potentially slightly less shitty if we ignore the mind control aspect.

The mindcontrol thing can be divided into two different viewpoints, both valid:

There’s an “Order of the Stick” joke in here somewhere.

Hey look, every random group in every multiplayer game ever.

Rope binding them together needs to be stronger. Thinking like a spikes-in spiked chain perfectly balanced between the weight of each stick that says ‘no loot or ranking or meters for loners. Work as a group or get nothing to show for your time.’

In my experience so far in the beta, it’s less about keeping together and actually playing their class. Your a 10 foot tall musclebound monster with a shotgun? Better stay in the back trying to potshot the sniper with it. Your a brain bursting sniper class with a long chargeup but high damage special ability? Better just keep trying to use it over and over again against random mob enemies, then getting killed when he gets surrounded. Your a melee heavy class with an abilty for closing the distance to force ranged units into melee combat? Better run off to… Read more »

Funny that the leafy stick (the least likely to burn) was the one that ended up catching fire.

And this is why I don’t play these games. I’m going to send a lot of people to see this comic. It explains it perfectly.