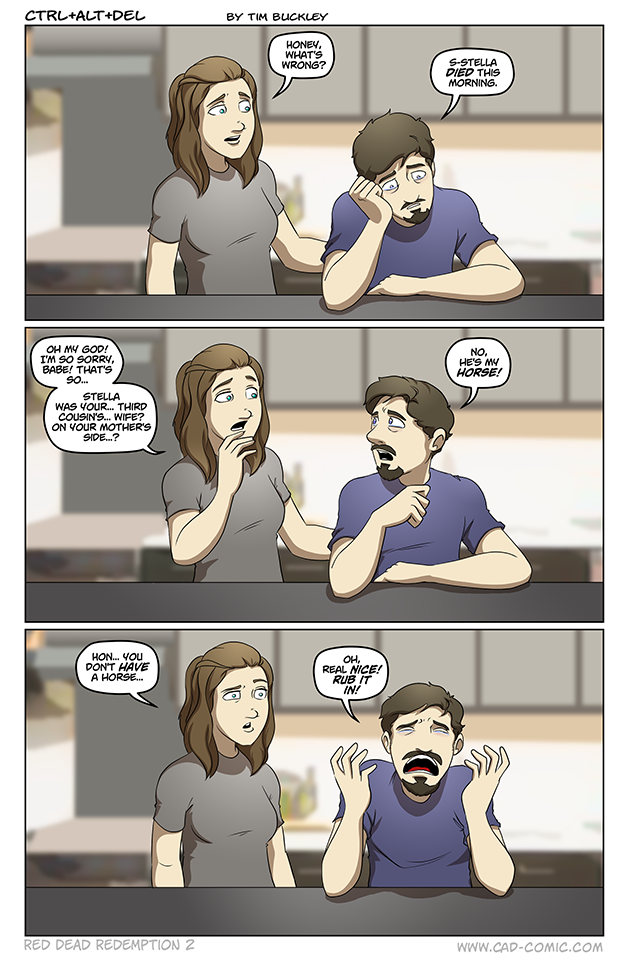 But The Bond Is Real

My first real horse, Rangely, was a dappled thoroughbred. The one that I got for free in Valentine because I’d pre-ordered the game. During a gunfight, he freaked out and ran into the middle of the bullets, and went down. That’s where I learned horses could get hurt, but you could save them with a magic potion.

Later, we rode off a cliff. I died, and respawned with some strange brown horse I didn’t know. That was how I learned your horse could die. Foreversies.

I didn’t like Brown Horse much, and none of the dull stable horses suited me either. So for the first time, I went out to find me a wild horse to call my own. I found a pack… a gaggle? A murder of thoroughbreds, and set my eyes on a beautiful, sleek black model with lots of potential in the speed department. He bucked me on my first attempt to tame him, and I had to chase him down all over again.

Finally, after some soothing words, wrastlin’ and some oat cakes, he was mine. My five-year-old, who was sitting with me at the time, said “You should name the horse ‘Stella.'”

I double-checked in the balls department, and said “This is a boy horse.”

My little guy said “And?”

So I named him Stella. And Stella has been my horse. For like, the past twenty hours of gameplay, most of it fucking around in the wilderness, it’s just been me and Stella.

I respawned face-to-face with Brown Horse, and my heart sank. I ran back to the spot of our showdown, and all that was left was my saddle, lying there in a bush.

That was how I learned my heart could break.

(And that I need to save more often.)

Oh and hey. Last call on these posters. Orders close Monday. The variant is just about gone, and the print run for the other will be determined by orders (rounded up because we can’t print them in odd denominations like “63” or whatever) so there may be some extras at a later date. But ordering right now will be the only chance to have your poster signed.

Your wife must be one patient woman. Also, I agree with your kid. No reason not to have his name be Stella.

You have my sympathies, man….sounds like the game does everything right, tho.

In Memory if Stella, the boy horse.

Dude, If you liked that horse that much you should have just loaded an earlier save, bruh.

Obviously he didn’t want to lose the progress he’d made through the game, though.

Yeah he loved the horse, but lets not get crazy here…

Him.
Reply to  Rames Jye

He loved the horse so much that he hadn’t stopped to save since he got it.

the thing I took away from this is that the developers of RDR2 took the time and care to lovingly render that horse’s balls. Imagine how that looks on a resume. Steven Smith, Rockstar software horse balls artist.

You would normally just list, say, “texture artist”. The interesting part will be the RESUME, and whether the artist wants to put the turntables of the horse testes onto a reel to help him get work at another company. I’d slap on some text saying “Yup, I’m the Horse Testes Guy”!

A group of horses is a herd.

I’ll be honest, this is the #1 reason I haven’t gotten RDR2 yet. Not something I want in my gaming experience.

Couldn’t they at least release a code for invincible horses or something?

Buy for PC and get a mod. There may be some delay on both of those options existing, but it will happen

My can see this conversation happening in your home. My wife has been playing FFXI for years and she would show me all of the Chocobo’s she would raise from time to time.

I loved Final Fantasy Online! I played XI for 7 years before quitting back in 2011. I definitely miss playing though I had other things take over and had to move on. 🙁

Losing your horse in RDR2 actually is quite disheartening. It sucks! I have had Runenbox for about 24 hours, still in Chapter 2 because I like to just…do stuff, and I ended up eating two hours of “progress” because the game forced me into a situation I didn’t want to be in and lost him.

As far as names go…who cares. It’s a horse. Horse names should mean something personal to you. Runenbox is an odd name for a thoroughbred and I feel it gives the horse a mythical quality. Your son was right, for the right reasons.

I found a way to avoid that. I catch good horses and build them all up to a 4 rating. That way if one dies, I am less disheartened by the resulting replacement.

That and the freebies always are available (to start from scratch) in Valentine…or at least have been every time I’ve checked.

And by catch, I mean liberate from the bonds of servitude to an ungrateful owner…just for the record.

The first bounty hunter mission, I was chasing down the snake oil salesman and rode my horse off a cliff near a waterfall. I landed in the water. My horse didn’t. Once I’d swum to shore I tried calling for it and learned that it had died. I captured that guy, carried him on foot all the way back into Valentine, and spent all of the reward money on a new horse. 8(

Fine! I’ll get RDR 2. I see it everywhere, apparently it’s amazing. I’ll get it, okay? I never played the first one, though I heard that it, too, was great. The universe apparently wants me to play it, so I give up and will get it. Ultimate Edition on PSN.

I really wish my hand wasn’t stitched up these past three weeks. I mean, I wish I could go back to work too, but everyone keeps talking about RDR2.

Fortunately good games release so rarely you can start playing whenever with near-zero risk of overlapping another great new release.

You can re-buy that thoroughbred for $0 at the stables tho. Happened to me.

Sucks to lose them don’t get me wrong. I feverishly googled to see if it was indeed dead for good and it was. Rebought and re-trained up, Bojack2 is alive and well. I read your post. Your bond with “that” horse is broken but with a quick #2 at the end it can be remade like snowball.

This isn’t about numbers or values.
THIS IS ABOUT A HORSE!

The Thoroughbred was Rangely while a wild horse was Stella. He wanted Stella, not Rangely. o.o;

Tbf, I don’t play the game, so don’t know if any wild horses that were tamed are suddenly buyable.

“For like, the past twenty hours of gameplay, most of it fucking around in the wilderness, it’s just been me and Stella.”

Uhm is it just me – because I am not a native English speaker – or is that part a little bit too equivocal? 😉

Not one to judge, but you’ve been fucking your horse in the wilderness?
It must really get lonely out there…

Can’t you just go to the Horse God Fountain and revive Stella for 1000 Rupees?

The rAt
Reply to  Eldest Gruff

Am I wrong or is that fountain genuinely creepy?

I’ve successfully avoided equinicide in that game, so I’ve only been there once or twice during quests and random exploring, but man, if I did lose horse, I’d seriously consider just wrangling a new one instead.

Shame there’s no Lake of the Horse God in RDR2.

Having not played RD2, I’m not familiar with whether or not you can summon/call your horse – but I’m totally picturing a cowboy standing there and screaming:

O hey, me too! But instead, mine’s named Yoda.

Save early, save often. The golden rule

I just suffered the same in Ghost of Tsushima