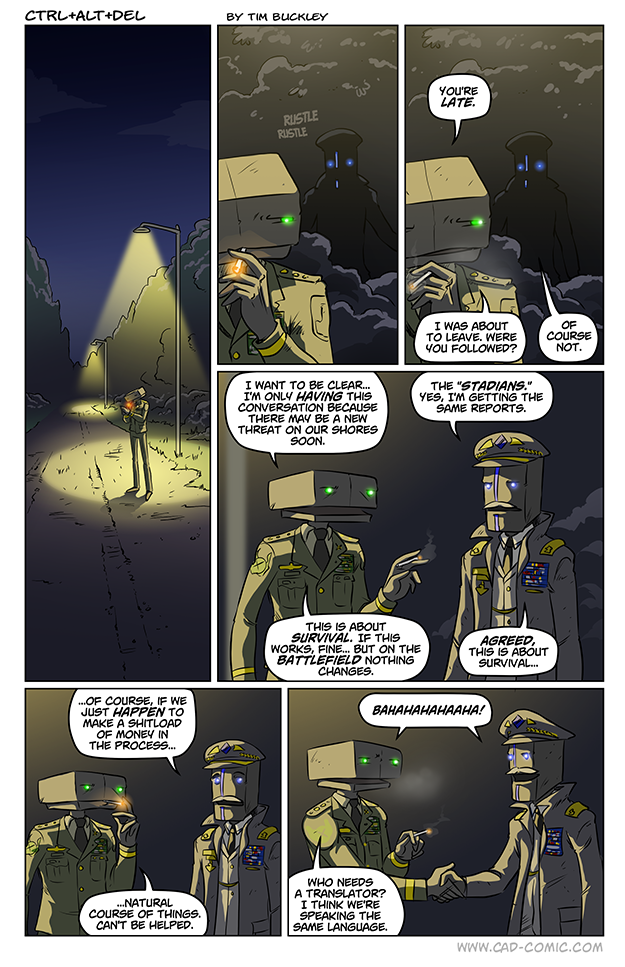 Sony and Microsoft are teaming up.

That sounds odd at first, but less so once you remember that while they are direct competitors in a couple areas of business, they’re both very big companies and hey, business is business.

A “memorandum of understanding” is far from a legally binding document, and “partner on new innovations to enchance customer experiences” is vague as all hell, but the fact that they’re even talking about working together is pretty interesting.

At a glance, it seems like both companies have something to gain here. Right now I think Sony is winning at the whole “video games” thing, but Microsoft definitely has a handle on the cloud computing angle, which I’m not sure Sony really has the infrastructure to tackle on the scale they might need.

What they might need leads me to my next baseless assumption, that this might be in some way a response to Google’s Stadia announcement. I’m far from readily onboard with Google’s idea of a streaming-only console, basically because they haven’t told us fuck-all about how it works or what it costs.

The idea, however, is interesting, and I think we can all see that the cloud plays a big part in the future of gaming. Whether we’re ready to completely give up physical consoles for the cloud remains to be seen, but the cloud is in there nonetheless. So perhaps for the PS5 and the Xbox 37 (because fuck sequential numbering, right?), Microsoft and Sony see more sense in creating a compatible backend for them both to use and being prepared when Google starts throwing around its considerable bankroll.

Microsoft and Sony will always be competitors at the end of the day, I’m sure, but anything the companies do that may lead to benefits for the consumer (cross-platform play as the rule, rather than the exception, for instance) is okay in my book.

Or, perhaps this will all turn out to be nothing.

As long as you get more fodder for your strip, as far as I’m concerned, already a benefit.

https://killedbygoogle.com I would never buy or recommend anyone buy a Google console. They just about killed nest a few weeks ago.

Whoah, hang on now. They never tried to kill Nest. Not even close. In fact, they’re putting more into Nest, going so far as to rebrand other Google products under the Nest name (Google Home Hub is now Nest Hub for instance). What they are replacing is the “Works with Nest” program. That’s the smarthome integration program that lets your smart bulbs or garage door opener tell your nest thermostat to do stuff. They’re replacing Works with Nest with Works with Google Assistant, another smarthome integration program that does nearly the same thing. It doesn’t work quite the same, just… Read more »

Nest is their security focused line, theyve owned nest for a long time, now theyre going to slap the google brand on it, and some nest branding on certain google devices.

Not sure what you think theyre going to? Stop making home automation gear?

I was like “What the hell is a Stadian?” but after reading the explanation I get it. Sounds interesting. If it works, and with Google’s moneybank it has enough money to work, then it might get quite a slice of gamers who like to be on the trend and what can be more trendy than a cloud console? XD

I’ll be honest, the only reason I really want Stadia to succeed is to see how Tim incorporates a new force that doesn’t have a box of its own, but is used on other devices.

Is it portrayed as a destructive heresy, like Epic?

Is it a zombie plague, that takes over other devices?

Or is it a ragtag army of oddly-shaped mismatched groups – some PCs, some consoles, some tablets and phones, some laptops?

Though at this point, I’d bet more on it having about the same presence as the Ouya.

Yeah I need WAY more information about it to even start brainstorming what it’s supposed to look like.

Wasn’t there a streaming console attempted years ago? I remember it failing because they realized that at the time not enough people had access to high speed internet.

I know the xbox one supports it (I’ve played One games on my PC over local network and it worked pretty smoothly) but you still need the full console.

The OUYA? Or the Steam box?

“Now what’s this I hear about the Switches using cup-headed ammunition?”

“… no clue. You can’t believe EVERYTHING those reports tell you, General.”

I am sure the Nintendo/Microsoft treaty will soon or later be impossible to deny. In all case, the stadians will enter in a dangerous territory. The console war is not for the faint of heart.

I love that they’re attending a secret collaboration mission that no-one can know about — in full uniform w/ medals and hat. This is not a sarcastic criticism, I love the campy over-the-top “this is a general” motif.

Well I remember that we had a conversation similar to this about the same time during the development of the PS4.Xbox One. The whole cross platform was smoke and mirrors just like backwards comparability. Though Sony kind of solved that by creating “PlayStation Now”.

Nah, because the Switches are doing the same back-room deals. Those XBots are playing the long game, man.

A long, long time ago, Sony and Nintendo worked together, they had a disk console project that was supposed to be launched around the SNES era, until Nintendo made a dick move on Sony.

Fast forward to today, I bet some execs at Nintendo are getting nervous about this kind of announcements, wishing they didn’t ditch Sony in the past. No we all have to do is wait to see if it does give off any results.

Yeah Nintendo jumped into bed with Philips behind Sony’s back, but the disc project Sony was working on for Nintendo led to the Playstation, so I think it worked out alright for them 😉

Did this storyline just get scooped by the Onion? I so hope this is where you are going with this

Only the TRULY elite Sony soldiers gets mustaches.

Wasn’t Xbox Live might be showing up on the Switch? Or was that just a wild rumor?

The comic is great as usual. However, the ads on mobile on this comic page today are quite anoying. Took me to a false page from my isp provider and then a full screen add. Adioco and ca-rogers-phone. Anyway, good work and I hope those 2 pesky ads will be blocked in the future.

Math, did you come here from the Facebook link? Or did you navigate here directly? If so, which mobile browser?

Hi. i came here from the facebook link with the Chrome browser on an Android phone.

Okay, thank you. That does help a bit. Are you certain it was the Chrome browser? By default when you follow a facebook link on mobile it opens the website in Facebook’s mobile browser, not Chrome, so I want to make sure.

You know, have we actually seen what the xbox one x actually looks like? The “super soldier” they hinted at awhile ago? Regardless, console wars are a personal favorite of mine.

Apparently the people behind the Sony cloud service was caught off guard on this new deal. 😀

I powered through all your comics, and I feel this is a rare opportunity to give Xbox a win here and you made it a truce. End of the day Sony is coming to Microsoft to use Azure. They need what MS has.

MS will make a lot of money from Sony next generation, the more popular PS5 gets the more $ in MSs pocket from Azure services.

It has to actually AMOUNT to something before it’s a win for anybody. Right now it’s just two companies talking. If they make a deal of some sort, then we’ll see where the chips fall.

Honestly the idea of gaming without a physical console REALLY intrigues me. Maybe it could become the next Steam, but who knows? Maybe I just want to see more console wars comics.