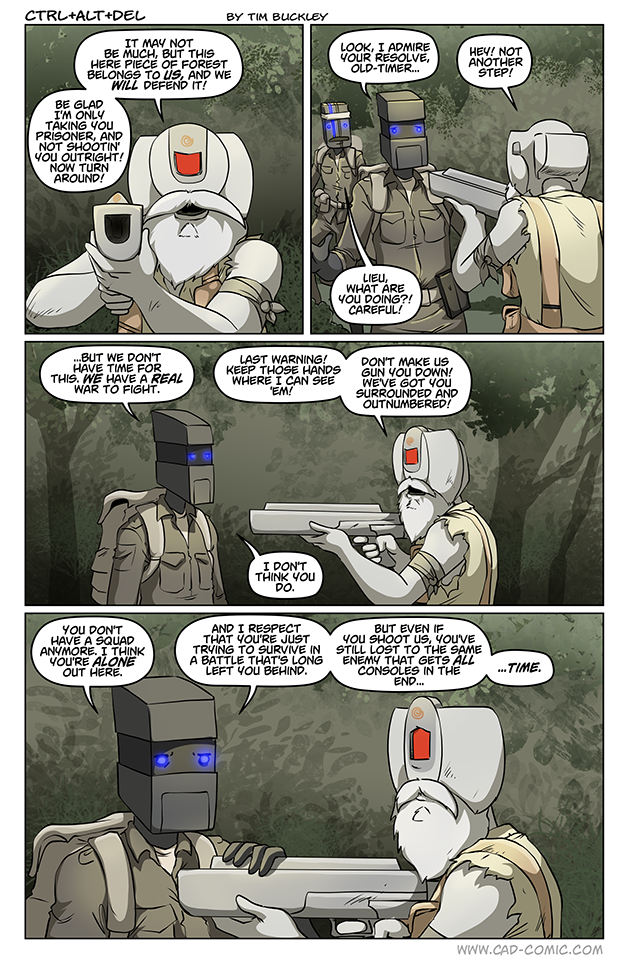 Medic, we got casualty! Got hit by feels… what these, no they’re not mine, some must have sprayed from him.

Who honestly would have thought, that in a silly comic strip about video game console robots, Tim would slip in something deeper and more philosophical.

The little surprises are some of the reasons why I love this comic.

Is he really the last? Wanted to see a Saturn or Game Gear

the thought that there is an Atari, CDI, or Virtual boy out there somewhere…

I’ve still got a Sega Genesis that works.

I hope they get him the help he needs.

Very apt consider that PS4 is about to join him. (well, it’ll take a few years for people to move onto which ever platform they decide on (or both))

Honestly I just can’t wait to see the PS5 and Series X introduced into the console wars 😀 We gotta have a behemoth vs a speed demon lol.

Should be interesting. I hope Tim continues the Console Wars story into the next gen. This has always been, at its core, the story of THIS generation, and I hope we see a transition, rather than an ending.

Didn’t it start with the PS3’s though? Been awhile so I’ll need to look back to double check.

Likewise I have a feeling we’re going to see the Dreamcast go down in a blaze of glory killing many an X-Bot, as in the end Dreamcast is at least from the same country as the PS4’s, enemy of my enemy and all that.

I doubt it. The Dreamcasts lost to the PS2s way back when.

An old man with a gun still has a gun mate, don’t underestimate how badass he can be 😉

Makes you wonder how many Console Kingdoms and Empires came and went away as time progressed. I think the PS and Xbox series is one of the longest console-series but even then at some point there might no longer be a new PS or Xbox coming out and then that’s game for them as well as it was for Dreamcast.

Dreamcast should have survived a lot longer, it is always sad to see a console life cycle end but it was even more tragic to see the entire Sega console series end with the Dreamcast. I am very curious to see what the new information will be from Sega this week, Tim seems to have lined the Dreamcast story up perfectly, almost like he knows something we dont.

Well Nintendo has been kicking around longer than either of the PS or X lines. On the other hand at some point they just wandered off and did their own thing and let the other two duke it out. Nintendo has always liked their gimics and they’ve had both winners and total bombs. The others like going for maximum power. Less risky but also more costly.

I wonder if we’ll ever see the effect of mobile phone games on the console wars lol. Or handhelds like the ds or something.

Is he alone? Since his appearance, I was expecting him to reveal his Retro Allies… And of course, his alliance with the most savage of all the nations, the Emulators

You say that like Emulators are a nation and not a way to get functional weapons of questionable quality.

Metus
Reply to  Him.

Do agree, Emulators are likely to be weapons or tools. Though, possibly we could see some consoles that are… more homebrew than anything. Unlicensed consoles, consoles with names that are only slightly different from the usual market consoles, just stuff people created to get some quick cash, I’ve always assumed. Wonder what kind of abominations they’d be in a world of consoles. Though, highly doubt we’ll ever step into that area with the webcomic. Or will we? xD

Ok sir I came here to laugh not question my very existence and the point of this thing we call life.

Replace “time” with “mobile” and we’d be just as sad. Maybe moreso. 🥺

One would think so, but in the Console Wars, who knows what such an affiliation would mean? Maybe, it was just helping the empire that would have a hand in destroying their homeland.

In The Console Wars, where ‘mom’ and ‘dad’ are portrayed as past generations of XBox or PlayStation, I’m sure that there are Dreamcasts out there, living still… but not on the front lines. Living in enemy territory, peddling their third-party games to the systems that took their lands. An uncertain and ignored minority.

Dammit, Tim. You’ve been making me sad for like a decade. Stop it. Existentialism-ridden PTSD is going to keep me crying for days, and my PS4 doesn’t need that baggage.

I’m not afraid to admit, your work can be pretty moving in very sad ways.

Especially with that “out of the blue” thing you do sometimes. I usually see things coming, but you pulled it off every time back in 1.0.

In spite of that, I wouldn’t dare to claim you should’ve done things differently.

Not just out of basic respect. I also consider you an excellent storyteller. And you don’t mess with that. You let it shine.

I never even played Dreamcast but damn 😭

I would love to see the Dreamcast have flashback back to when he was fighting the PS2.

I just re-read an old tips & tricks magazine while cleaning the attic over the weekend. It showed the PS2 as “A glimpse at the future”. Gave me the same kind of retro-vibes. 🙂

That was pretty great. The Dreamcast is kind of an enigma in game culture these days. It STILL gets a hand full of ports and releases each year. The faithful to the system just don’t let it die. I can appreciate that, I loved my Dreamcast. I still have one floating around but it’s not in proper working condition any more. Doesn’t like to read discs. Getting that console for Christmas shortly after launch, well there’s some childhood memories. It had a fantastic library and some of my favorite games to boot. Hopefully Tim keeps this storyline running in the… Read more »

Tim, props for how you drew DC in the last panel.
Not too many facial features to work with, yet you managed to make it work with the first glance at it – at least in my case. Like really, only an eye and the message was conveyed instantly. Kudos.

Jesus, Tim. That got heavy.

Am I the only one freaked out by it’s head?

and u’re not freaked out by the PS4’s? I think the head is very well designed! It actually kinda fits as a face

I came for lols, not sads.
Wholesome sads.