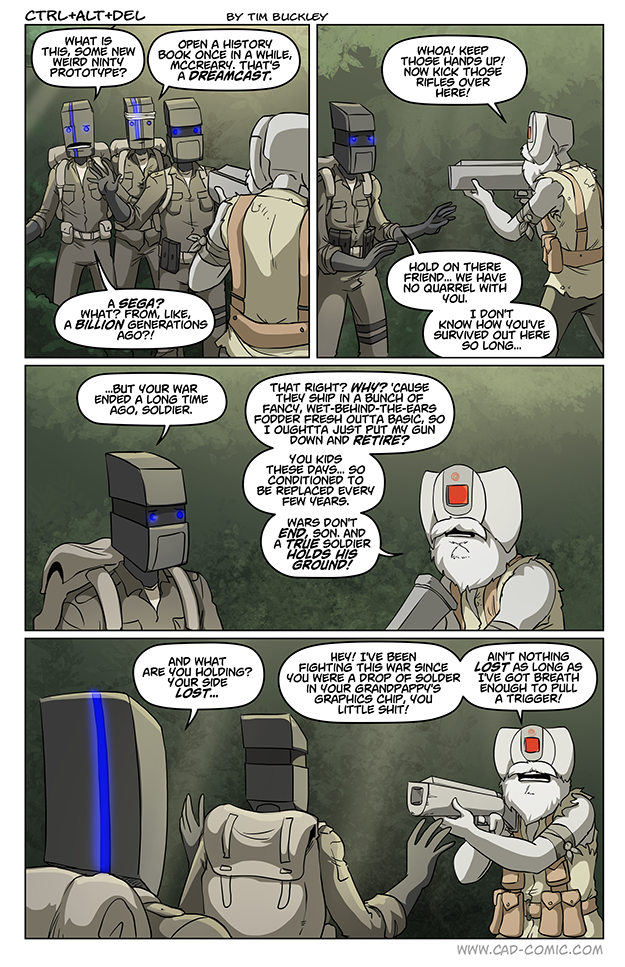 Get off me lawn!

This feels like a spot-on reference to actual soldier Hiroo Onoda who refused to believe that World War II was over. He was hiding out in his jungle post in the Philippines for 29 years. It’s a moving story.

Until you consider the fact that he may have murdered civilians during that time.

According to the article I read, he did. He killed villagers he assumed were enemies. He was pardoned by the local government when the Japanese delegation arrived, including his brother and retired commander, to officially relieve him of duty.

no thanks nintendo
Reply to  Kasaix

Even if the government pardoned him, he’s still a total douchebag and then some for murdering innocent civilians, and his story is hardly “moving”. Unless you count being moved to anger, which is usually not what people mean by “moving”

GamerLEN
Reply to  no thanks nintendo

He was also likely crazier than a shit house rat by that point too.

Since I can’t put what historically happened in words here’s a video from Today I Found Out about the man and the 29 years he spent fighting.

Here’s the article I read.

I’m not even sure if he was actually crazy. He believed that he was still surrounded by enemy combatants, which is a fair assumption to make when his two fellow soldiers were shot and killed by locals a few years after the war ended. The rest of his life is actually pretty normal: he formally surrendered and turned over his weapons to the Philippines’ president who pardoned him, moved to Brazil to raise cattle the year after, and then came back to Japan in the 1980s to establish an outdoors education camp for kids after he heard about a Japanese… Read more »

Weeded Wainbow
Reply to  no thanks nintendo

If this is based on that I think everyone needs to take a sec and think. Go back and look at what Japanese soldiers were trained to do. Literally die before surrender they flew planes into ships and were burned alive in caves because they refused to surrender even in clear defeat. Even there own citizens jumped off a cliff to their deaths because of propaganda about US soldiers. Not in any way condoning it, however you must understand the the time, place, and culture that is far different then our own. Also really do check out this story it… Read more »

If you look at history through the lens of today you aren’t seeing anything. He was doing his duty till the death. He was not only fighting for his nation he was fighting for his Emperor and God.
Yes he was probably nuttier than a walnut farm after that long alone, but he was abandoned and only had one thing to live for. Duty. He is strangely the epitome of a solider. Both Roman and Greek history are filled with this imagery.

I always assumed that the Japanese government had no idea that he was out there, but I read a book about him a few years ago and apparently they were very aware, and tried to get him back for years. At one point they dropped thousands of fliers all over the island telling him the war was over and to come home, but he found a typo in the flier and convinced himself that the typo was a secret message indicating that the information wasn’t real, and it was actually the enemy trying to trick him. Eventually someone found him… Read more »

well, if you are trained to believe enemy is truly terrific and cunning, you wouldnt believe either in war zone and alone in hostile territory just any info coming to you

We should look at history and learn from it. What the Japanese government did to its people (and through them, to other people) was objectively horrible. The man did awful things, as a result of his training, and we should endeavor not to recreate his story ever again.

I know some Japanese citizens did that, but should also emphasize not all of them were like that. In particular the Okinawans were commonly forced to commit suicide by the Japanese army before US forces would arrive. It lead to situations where they were fleeing Japanese military and trying to surrender to US forces. I know at least one instance where US forces unintentionally killed fleeing women and children when they had tried to reach US held area during cover of night. The US forces were so used to Japanese army suicide charges during the middle of the night that… Read more »

Meckel
Reply to  no thanks nintendo

You may have missed the “he assumed were enemies” bit. That’s what you do to enemies in a war, you kill them. That’s why he was there in the first place, that’s the last thing he’d been told to do, so that’s what he did as best as he could.

Frank Bromley
Reply to  no thanks nintendo

leduk
Reply to  no thanks nintendo

should I remember how many civilians died by the end of the western governementS the past 100years?

You tell ’em Dreamcast! Retro gaming is a juggernaut unto itself these days 😛

And given that Sega are about to make an announcement that “might” be a return to the console wars ( or a retro dreamcast mini) this could be highly prophetic little part of the console wars.

I like this “Twinkle in the eye of your father” saying but in Console terms. XD
Old Dreamcast is right though, there are still plenty of fans of it around even now. Sure they aren’t millions but they’re loyal, still keeping their old Dreamcast’s intact and working. So in a way the “war”never ended it just changed battlefields.

This man is a true patriot of gaming.

When do we get to see some emulator action in this war?
Maybe the cannon fodder of the PC master race faction?

“They may take our hardware, but they will never take our FREEDOM!”

“Are you not Emulated?!”

That would be the perfect end to the series, to find out it was all a simulation all along.

This does make me wonder, is his ammunition just the stuff people have been making off market? Cause I recall something about a dreamcast game being made only a few years back.

I still have my Dreamcast. I even turn it on once in a while…

Everyone else read that in a gravely old soldier voice?

Sony’s just got caught up in the trees somewhere.

I love DC Soldier, but I gotta say . . . SUCH a missed opportunity, not using one of the awesome-looking Dreamcast light guns. I seem to recall them being junk, but they looked SO cool!

The Dreamcast has a point; games were produced for it until 2007.

Okay so I just have a question regarding the PS4’s. The one talking to the Dreamcast in the second panel, what model is that? I’ve been looking at that design in the console wars for years but I could never figure out what he’s supposed to represent. Obviously the other two are a PS4 and PS4 pro but I can’t figure out that one guy.

A PS4 Slim. The Slim has a solitary dark break sandwiched between two lighter panels, and more rounded corners than the other PS4 models.