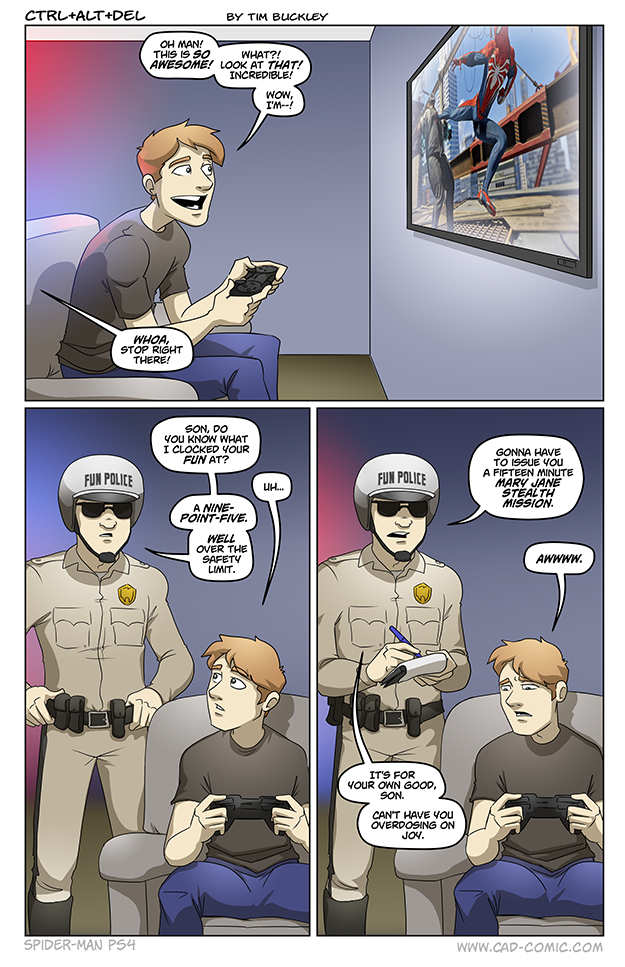 The following is spoiler-free, re: Spider-Man.

I love the Peter Parker/Miles Morales/MJ sequences in Spider-Man from a narrative perspective. But from a gameplay perspective, man, they are such a bummer.

There are instances where taking over the character adds to the game experience and the story of these characters; Miles Morales, I’m looking at you. Also GCS was cool. But some of these sequences feel a little uneccessary. Like when MJ is like “Let me tell you what happened!” and instead of then just saying “I went to the place and learned the thing!” you then have to spend fifteen minutes with no super powers to learn the thing.

With that said, the relationships in Spider-Man are fantastically portrayed, and I desperately hope this is the start of a franchise for Insomniac, because I’d love to see them build on what they’ve done here with these characters.

“let me tell you what happened”
“shhhhh, shut up, I wanna hear Luis say it”

They should have had him narrate the events of the MCU at the end of Endgame as the end credit scene.

I’ve always been a story over gameplay person so I enjoy the different ways of adding to the story. Don’t get me wrong gameplay does matter a lot but I DO get to play as Spiderman for the vast majority of the game so the rest doesn’t bother me.

My thoughts on this have been along the same lines, though I did think of an interesting little twist they could do to make them more interesting….especially the MJ sections.

What if they were optional? By that I mean you could play those sections, or skip them and have a cutscene play that explained what happened? The payoff would be rewards for completing the optional sections like in any other game.

By making them optional people would have no reason to complain, while people who choose to do them would get rewards, either specific costumes or special stuff.

remember the backlash when square enix made grinding optional for FF7 mobile?

Thats the FF fan boys. They’re more than a bit strange and yeah. ff7 is over rated. I said it.

I didn’t mind it that bad. If you’re gonna have a forced stealth mission or an area of the story where you absolutely can’t use powers for some reason and you don’t want to use a drug or gas to take away Spidey’s powers temporarily, that’s definitely the way to do it. Besides, it’s Laura Bailey as MJ, and she’s good enough at it to make me not mind.

Yeah. I also think it provides some essential context for the relationship drama. Yes, she lacks superpowers. She’s also really capable in her own right. And that’s the difference between understanding why she and pete had issues and how they can both do better by each other… and thinking she’s whining about not being allowed to be as awesome as the superhero. Hell, her intro moment was her actually cracking the skull of a thug with a gun. Just death by blunt trauma fire extinguisher.

Not having the game, I did not see that punishment coming…I was expecting more along the lines of arresting him for enjoying a game when SOME GUY ON THE INTERNET!!!!!! said it was “the sux”

And here I thought the Mary Jane Stealth Mission was code for something else. #facepalm

Yeah, those sequence changes are a bit jarring, but I kind of dig them. Figuring out what to do and where to go is kind of fun.
I agree wholeheartedly, I need a whole franchise with Insomniac’s Spider-Man. This can not be a one-and-done thing, they made something magical here, and I need more.

I was pretty OK with the not-Spider-Man sections…right up until they decided to try to be challenging. They start sucking hard as soon as they start making you work to progress through them.

While I appreciate the attempts to incoporate story into gameplay through this method, it still feels like they would have been better off having Miles Morales as an optional character (with machinery so he has spidey powers) and instead of saying “here’s what happened…(cue mini level)” they could have him say “here’s what happened…” while a cutscene esque thing lets you get the gist of what he’s trying to say.

Fek, when he was running around hacking shit, I was actually hoping for a more intricate level with him. I’ve queued up to play games with that kind of mechanic.

I feel like the last panel is a stealth We Happy Few joke.

Personally, I really like the one level *spoilers?* Where MJ is talking Peter through his approach and attack. That was a hell of a lot of fun and a nice twist. Seeing what it would be like to be a normal person in a world with Spider-Man.

I’m only halfway through the game right now, but I kind of hope if they have more levels where you play as someone else, they so it in tandem with the Web Head.

What does GCS stand for?

Frick I wish I had a PS4. I don’t say that often, but this game has me wishing it. Not even God of War made me say that. But, man, this good looks amazing.

I would say that this game is worth getting a PS4 with the caveat that you get SO. MUCH. MORE. when you do get one. Horizon: Zero Dawn and God of War are both fantastic games with beautiful combat, scenery, storytelling, and environments.

But seriously, Spider-Man is just a joy to play as a whole with a fantastic story. Seriously, the game punched me in the gut a few times with its story.

As jar as the MJ sequences go (All the Miles portions were awesome and will not be hated on), the first one was fine cause it introduced this MJ with her brash personality. GCS was cool to see from the other side of the Spidey-Window so to speak on how the people see Spider-Man in action. The biker gang seemed unneeded but whatever, introduced a cool villian. The base one was VERY UNNEEDED and only existed to add stupid tension between MJ and Spidey, and the last MJ portion was cool as it told a better story through her eyes… Read more »

Thats kind of funny because lets face it if we DID have super powers that is probably exactly what would happen, I mean any moment we were not USING our super powers would just be frustrating to no end.

I dunno. I mean, sure, power fantasy and all, but… what about just “toning it down”? Like, you have superman’s powerset. And you’re using the heat vision and super-speed for petty shit in your day job because you’re still working out how to up your income without IRS, FBI, and legal liability issues… but you’re human, and you actually do have the power to glare so hard people feel a burning sensation. Actually, there is a little of that in Cultist Simulator. The office job has a bad boss at one part, and he’s just killing all the benefit of… Read more »

Superman has super speed, making it incredibly easy to get all your taxes done in time!
Of course, that doesn’t make them any less tedious or boring.

Activating super speed just changes whether or not you get it done before dinner gets cold.

For me, the most infuriating part of Spider-Man was when *spoilers* the Demons are trying to set off a bomb in Grand Central Station, and you play as MJ trying to get to the bomb and defuse it. Normally, this wouldn’t annoy me any more than any other MJ/Miles/Peter section. But this is special. Spidey is swinging around taking out Demons. While you play as MJ. I’m getting mad just remembering it.

But what a way to go…